The Supreme Court (and likewise the Nazareth District Court) denies public access to inspect the authentic decision records in the Zadorov court file. Instead, it presents to the public invalid electronic records. Supreme Court Magistrate denied access to the paper records (original records) in the Zadorov court file with no legal foundation. Appeal, which was filed with Justice Salim Joubran, is listed “Closed” with no judgment... The most recent actions (both in the Supreme Court and the Nazareth District Court) also show close collusion in perversion of Due Process between the judges and senior prosecutors – Mirit Stern, Shila Inbar, and Tamar Borenstein. Human error, or fraud? Response of the Supreme Court on the request to correct the purported error would provide the answer... The evidence, so far discovered, shows that Judges Yitzhak Cohen, Esther Hellman, and Haim Galpaz conducted sham/simulated trial against Roman Zadorov in Nazareth. The detention of Roman Zadorov by the Israeli authorities should be deemed false arrest, or arbitrary detention, and serious violation of Human Rights. 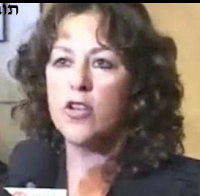 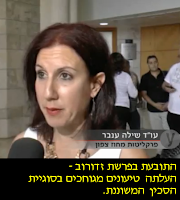 Figures: (from top right) Nazareth District Court Presiding Judge Avraham Avraham – denies access to inspect the electronic signature data of the electronic judgment records in Nazareth. Magistrate Gilad Lubinsky and Justice Salim Joubran deny access to the paper records (original records) in the Roman Zadorov paper court file, now held in the Supreme Court. Senior State Prosecutors Shila Inbar, Shimrit Stern, and Tamar Borenstein collude with the judges in this matter, and it remains unclear, who controls whom – the judges the prosecutors, or the prosecutors the judges...
____
OccupyTLV, July 1 – inquiry with Supreme Court Chief Clerk Idit Melul asks for correction in entries under the appeal court file Joseph Zernik v Roman Zadorov and State of Israel (4650/16) in the Supreme Court. The appeal was entered “Closed”, pursuant to “Decision or Judgment”, but to this date no decision or judgment were rendered on the matter of the appeal itself. 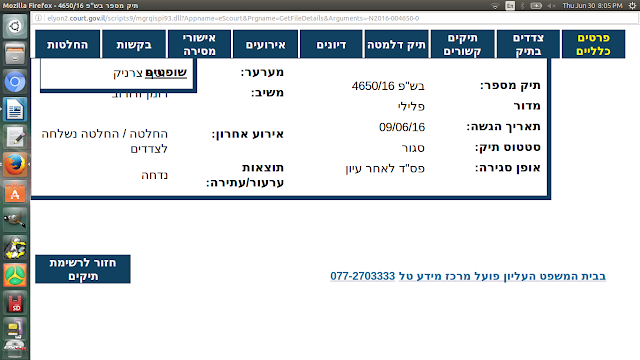 Figure: Joseph Zernik v Roman Zadorov and State of Israel (4650/16) in the Supreme Court – appeal of Magistrate decision – data from the public access system: General Details – File Status: closed; Manner of Closing: Judgment following review. In this court file no decision or judgment has been rendered on the the matter of the appeal.


Direct link to the inquiry to the Chief Clerk:

_____
The appeal originates in denial of access to inspect the paper decision record (original records) in State of Israel v Roman Zadorov (502/07) from the Nazareth District Court. The court file is now held by the Supreme Court.
The law in this matter is clear. The Regulations say that “every person is permitted to inspect decisions that are not lawfully prohibited for publication”. Judgment in petition of the Association for Civil Right in Israel v Minister of Justice additionally spells out that there is no requirement to file a request in this matter. Moreover, the Judgment declared that such right is “a fundamental principle in any democratic regime... constitutional, super-statutory...”
Inspection of decision records was supposed to be conducted in the Office of the Clerk, pursuant to procedures established by the presiding judges of the various court. However, Presiding Justice of the Supreme Court Miriam Naor refuses to uphold the law and perform her duties by establishing such procedures. Later, Supreme Court Magistrate Gilad Lubinsky usurped with no legal foundation the authority to deny access to inspect the decisions, under the reasoning of “a jumble in the court file”... Instead of inspection of authentic decision records, Magistrate Lubinsky decided that only inspection of invalid electronic records was permitted.
The appeal claims that the reasoning of “a jumble in the court file” is feeble and perplexing as an excuse for denying a constitutional right. Moreover, such reasoning raises serious concerns regarding competence of the Supreme Court, which purportedly conducted for 5 years an appeal from such court file, and now is ready to rule on a pending request for a new hearing by an expanded panel...
The appeal further claims that Magistrate Lubinsky's conduct amounts to withholding of evidence for serious fraud upon the court by Judges Yitzhak Cohen, Esther Hellman, and Haim Galpaz in the Nazareth District Court – through the conduct of sham/simulated trial.
Fraud experts consider conduct such as the Supreme Court' – refusal to display authentic records, and displaying only invalid records instead - “Shell Game Fraud”, or “Confidence Trick”. However, regarding the latest move by the Supreme Court – listing the appeal court file “Closed” with no judgment – the question remains open regarding the fraud intent (versus human error). Response by the Supreme Court, if any, on the request to correct the purported error, would provide the answer on this question...
It should be noted that Roman Zadorov's Counsel, Attorney Yarom HaLevy, did not object to the inspection. In contrast, Magistrate Lubinsky conducted secret consultation with State Prosecutor Tamar Borenstein. Both the Supreme Court and Attorney Borenstein refuse to this date to serve the responses by the State Prosecution on this matter, which were filed in the Supreme Court, in violation of the fundamentals of Due Process. With is, one may guess that the responses were of conspirative nature, like those of the North District Attorneys (see below)
The relationships between the court and the State Prosecution, both in Nazareth and in the Supreme Court show close collusion, but raise questions as to who controls the situation: The judges, or the prosecutors...
Events in the Nazareth District Court were surprisingly similar. The Court provided access to invalid electronic records, but Presiding Judge Avraham Avraham denies access to the electronic signature data, which would sho whether the records are authentic, or only “drafts”. There too, Presiding Judge Avraham Avraham conducted secret consultation with the State Prosecution in this matter...
Regardless, the evidence which has so far been discovered shows that Judges Yitzhak Cohen, Esther Hellman and Haim Galpaz conducted a sham/simulated trial on Roman Zadorov in Nazareth.
The confinement of Roman Zadorov by the Israeli authorities should be deemed false arrest, or aribtrary detention, and serious violation of Human Rights.
The Varda Alshech scandal showed that Israeli judges have usurped the authority to publish sham/simulated court records, which they call “drafts” (media call them “fabricated records”). At the same time they mislead parties, counsel, and the public to believe that these are valid and enforceable court record.
The Zadorov affair with all its ramifications exposed in an unusual manner the state of the Israeli courts and justice system. Prof Mota Kremintzer summed it as follows:
Conduct of the State Prosecution in the Zadorov case is scary... When you add to it the position of the Supreme Court and the Attorney General in recent years, we are left with a justice system that is primarily busy defending itself.
----
Presiding Judge of the Nazareth District Court Avraham Avraham, North District Prosecutors Mirit Stern and Shila Inbar in action – denial of access to inspect the record in Zadorov court file. 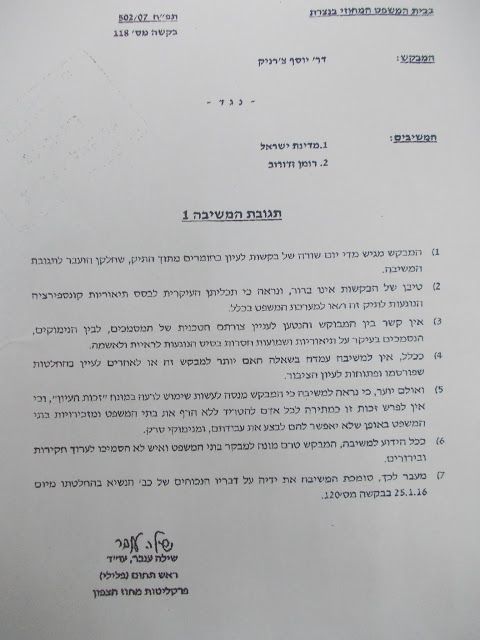 Figure: State of Israel v Roman Zadorov (502/07) in the Nazareth District Court - the secret January 26, 2016 filing by North District Attorney Office - Attorney Shila Inbar - on request to inspect the paper decision records (original records ) in this case.
____
Attorney Shila Inbar's secret filing in part says:
The nature of the requests is unclear, and it appears that their purpose is to establish conspiracy theories pertaining to instant court file and/or the justice system in general... The Requester is trying to abuse the term "Right to Inspect"... The Requester has not been appointed Ombudsman of the Courts yet...
The refusal by North District State Attorney Mirit Stern to duly serve the response was the foundation for a complaint on Fraud, Pervestion of Court Process, and Breach of Loyalty, which was filed with Commissioner of Prosecutorial Oversight Hila Gerstel.  North District Attorney Mirit Stern denied a request to be duly served Attorney Shila Inbar's response under false claim that the request was for inspection of "investigation materials"... 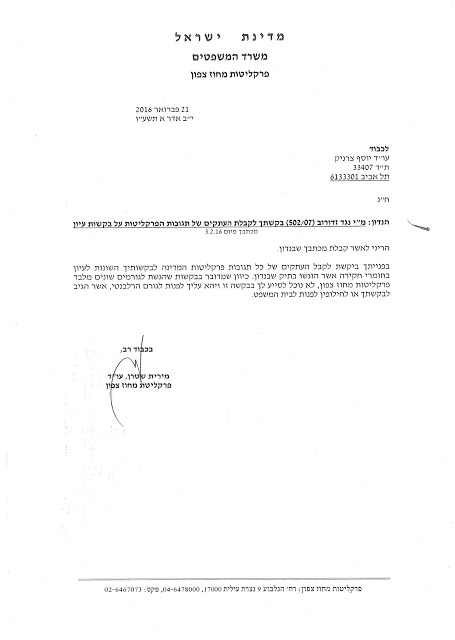 Figure: February 21, 2016 response by North District Attorney Mirit Stern on request to duly serve the January 26, 2016 response by North District Attorney Office - Attorney Shila Inbar - on Pro-forma request to inspect the paper court decisions (original records) in State of Israel v Zadorov (502/07) in the Nazareth District Court.  Attorney Stern refused to duly serve the January 26, 2016 response under false pretense, that the request was for inspection of "investigation materials".  The false response was the foundation for a complaint against Attorney Mirit Stern, filed with Commissioner of Prosecutorial Oversight Hila Gerstel.
_____ 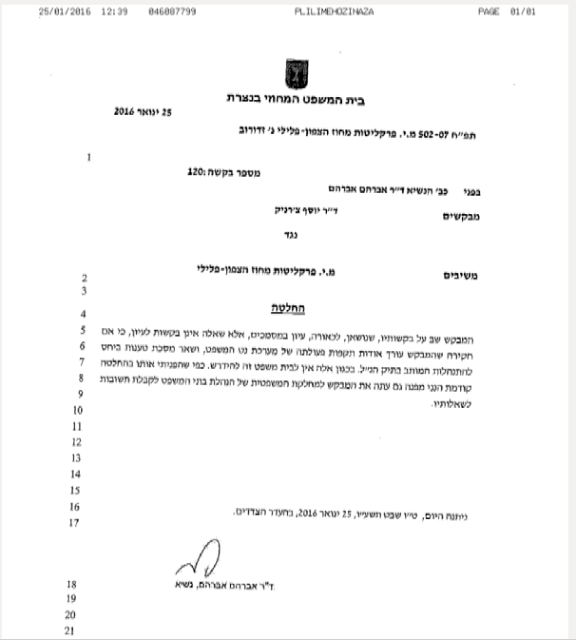 Figure: State of Israel v Roman Zadorov (502/07) - Judge Avraham January 25, 2016 Decision on Request to Inspect paper decision records (original records).  The Request was conducted in patent violation of the law, which permits inspection in previously published decision with no request process at all, and does not provide the judges any discretion to adjudicate the matter.
____
Request No 120 pertained to attempt to exercise the right to inspect "lawfully made arrest warrant" and "lawfully made judgment docket".  Judge Avraham's Decision says:
... these are not requests to inspect, but an investigation by the Requester of the validity and operations of Net-HaMishpat system and various other claims relative to conduct of the judicial panel in instant court file.  In such matters, this Court shall not engage...
It is not difficult to understand why the State Attorney Office and the Nazareth District Court got so sensitive regarding the requests to inspect the paper court file - it is likely to produce the best evidence yet of the Fraud Upon the Court by Judges Yitzhak Cohen, Esther Hellman and Haim Galpaz, which last years - 2007 to the end of 2010 - in conduct of a "fabricated"/sham/simulated trial against Roman Zadorov. 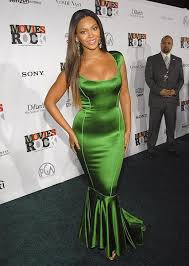 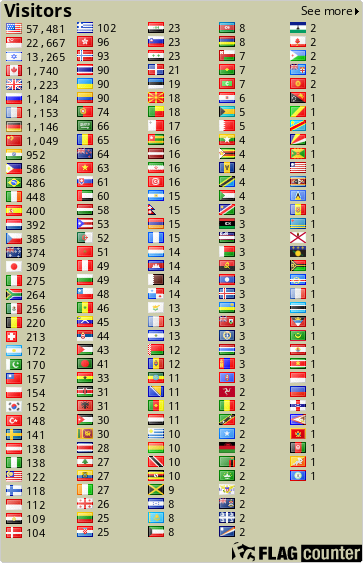