With Countrywide and the Sub-Prime Crisis, everybody got to pitch in...

You got to pitch in...
It has been a year now, since the FBI initiated its investigation into the sub-prime crisis and potential criminal activity  that led to it.   Many believed that indictments of the leaders of COUNTRYWIDE, - ANGELO MOZILO and SANDOR SAMUELS were a matter of days. After all, it is the biggest heist in the history of mankind... and we ain't seen the end of it yet...  However, the FBI seems not to be able to get the grip of this.  It's a tough job.

I am a practicing orthodontist, and the victim of real estate fraud by Countrywide and others.  I found out about Countrywide only in December 2006, while they initiated the fraud against me in October 2004... My case did NOT  involve foreclosure, bankruptcy or default on any payment at all. In fact, I had no business with Countrywide whatsoever, and did not know the name until December 2006. It was greed in portion, equally blended with willful criminality.
Still, without any qualifications, without an army of investigators, within a month - by January 2007 I filed a complaint with the FBI that gave the outline of the sub-prime crisis, then yet to be discussed in the media.  But the FBI refused, is refusing, and will continue to refuse to  investigate.  They never claimed that what I provided was wrong.  But the cause of not investigating my case is compelling enough a reason, that Assistant Director of the FBI, KENNETH KAISER, and the Director of the Department of Justice, KENNETH MELSON, provided false and deliberately misleading (i.e. fraudulent) responses to inquiries from U.S. Congress, by the Honorable DIANE FEINSTEIN, Senator, and the Honorable DIANE WATSON, Congresswoman,   to explain their refusal to investigate.

In discussing the issues with FBI it became obvious that such investigation would not be even initiated, since it would expose the criminality of certain judges.  And tightly associated with such corruption are certain large and very large law firms.
That is what in fact provides COUNTRYWIDE officers ANGELO MOZILO and SANDOR SAMUELS effective immunity...

In between I have worked with several fraud experts, and have opinion letters supporting my claims of fraud at countrywide leading directly to SANDOR SAMUELS - former Chief Legal Officer.  Since if ENRON was primarily about accounting, then COUNTRYWIDE is primarily about the practice of law.

One of the fraud experts I worked with is JAMES WEDICK, retired FBI agent, possibly the most decorated FBI agent alive. I provided him with a volume of 500 pages of selected papers, as background, and two two-page records for examination.  He came back with an opinion that FBI should immediately initiate an investigation. The subject was ATTORNEY DAVID PASTERNAK.  But even with that letter, the FBI would not investigate. Maybe PASTERNAK is not important enough... And as soon as that opinion letter became public knowledge, it became evident that Mr WEDICK came under pressure by FBI not to cooperate with me any longer.

Therefore, I would like to offer the following help to the U.S. Government and the FBI. to help curb the current financial crisis, and restore trust in our law enforcement agencies, justice system, and financial institutions - a tall order for a single guy:

IF AND ONLY IF THE FBI AND U.S. GOVERNMENT PERMIT, I WOULD SUBMIT TO FRAUD EXPERT, DECORATED VETERAN FBI AGENT JAMES WEDICK, A VOLUME OF 500 PAGES, TOGETHER WITH TWO COUNTRYWIDE RECORDS FOR FRAUD EXAMINATION.  I WILL PAY OUT OF MY OWN POCKET $5,000 FOR AN OPINION OF MR WEDICK ON ORGANIZED FRAUD IN COUNTRYWIDE LEGAL DIVISION HEADED BY ATT SANDOR SAMUELS.  MOREOVER, NO JUDGE, AND NONE OF THE LAW FIRMS WOULD BE MENTIONED BY NAME, AND MINIMAL IF ANY MENTION OF THE COURT WOULD BE MADE EITHER.  IT WOULD BE ENTIRELY BASED ON SUBPOENA PRODUCTION BY COUNTRYWIDE, PRIOR TO ANY LEGAL PROCEEDINGS.

I firmly believe that I have sufficient evidence for criminal indictment of DAVID PASTERNAK and SANDOR SAMUELS, on multiple counts of obstruction of justice and fraud, and possibly also for indictment of many others in COUNTRYWIDE, pursuant to 18 USC §1961-8 Racketeering Influenced and Corrupt Organization.
I surely have sufficient evidence for indictments under 18 USC §1961-8 of others, who shall remain unnamed, as noticed above. However, this individual sent his recommendation to the OBAMA Presidency: The next director of the FBI must be the most qualified candidate, provided that he/she is NOT A JUDGE.  The effect on integrity of the judiciary in this country may be amazing.
One cannot conclude this without noting the connection between SANDOR SAMUELS - former Chief Legal Officer of Countrywide and DAVID PASTERNAK - attorney in private practice. Both served as Presidents of the HOUSE OF JUSTICE.  No joke... Both served as presidents of BET TZEDEK, the House of Justice, a well-recognized, possibly the most prominetnt JEWISH CHARITY in LOS ANGELES, providing free legal services.  When I first found out about SAMUELS' community service there, SANDOR SAMUELS was in the midst of a campaign against frauds in Southern California.  It looked like this: 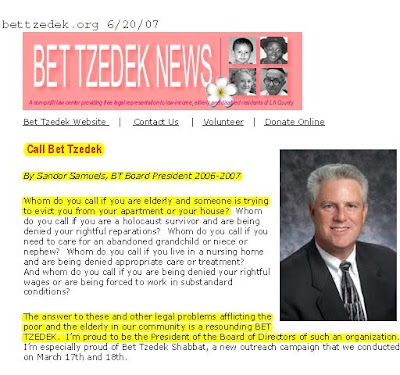 Therefore, I left a note for him in the office of BET TZEDEK, asking to help in stopping the fraud by COUTNRYWIDE against me.  The effect was phenomenal.  Within a couple of days the whole web-site of BET TZEDEK was down.   And when it was up again a week or two later, there was no mention of SANDOR SAMUELS on it, or a campaign against fraud, instead, a campaign of retaliation against me started, still going on today.  The center of it - gag orders, to prevent me from speaking about such issues, and prevent me from effective action in court.  In recent months I have written a number of times to MITCHELL KAMIN who heads the HOUSE OF JUSTICE today, and to Att ALEJENDOR MAYORKAS, member of its Board of Directors (and former U.S. Attorney for the Central District of California, drafter of the Consent Decree) asking if the HOUSE OF JUSTICE has a dispute resolution or grievance procedures in it bylaws.  No response was ever received...
I ask the JEWISH COMMUNITY to insist on resopnse from BET TZEDEK to the simple question -
Is there any dispute resolution or grievance procedure in the bylaws of BET TZEDEK that I could use to bring up my grievance with that organization?
BET TZEDEK, the HOUSE OF JUSTICE  advertised a campaign against fraud, then allowed its President at that time to use my honest response and request for help as a reason for retaliation.
Joseph Zernik, DMD, PhD
Posted by Human Rights Alert (NGO) at 3:29 AM No comments:

We are Proud to Announce the 2008 Pinokio Award... 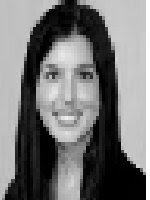 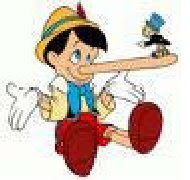 Att Jenna Moldawsky                                                           Pinokio
RUNNERS-UP:
1) Sandor Samuels -   former Countrywide Chief Legal Officer
2) Angelo Mozilo -   former Countrywide President/CEO/Chair
3) Judge Learned Hand - ( NOT Terry Friedman)
09-01-13. Att Jenna Moldawsky – Winner of the 2008 Pinokio Award*
As the year comes to a close, there is no doubt that Att Moldawsky deserves more than anybody else the 2008 Pinokio Award! Att Moldawsky won the award for her landmark paper:
“Non-Party Countrywide Home Loans, Inc’ Notice of Motion and Motion for Monetary Sanctions…”.**
.
“In this artful pleading, Att Moldawsky masterly crafted all possible Pinokio effects:
– Att Moldawsky purportedly represents a corporate client, but she would not answer direct questions about its identity, neither has she filed any corporate disclosure in the past six months since BOA took over Countrywide, and since Sandor Samuels and Angelo Mozilo presumably ceased to be Countrywide employees. Att. Moldawsky also filed no paper showing she was authorized by BOA, and BOA denied she was authorized.
– Att Moldawsky purportedly represents a client whom she designates “Non-Party”. By what authority and on what legal foundation she came by this party designation? Obviously it is handy in failing to report the violations of the law per Sarbanes-Oxley Act of 2002 §307, but why did the Clerk of the Court accept such filing?
– Att. Moldawsky’s paper claims to be part of a case captioned Samaan v Zernik (SC087400), of the LA Superior Court. But the offices of Presiding Judge and Clerk of the Court refuse to certify such facts.
– Att Moldawsky adequately listed no judge as being assigned the to the case on the face page. And yet, in the first sentence she noticed it to “Department J”. What legal theory led Att Moldawsky in determination of venue and jurisdiction? Maybe the fact that Mr Terry Friedman is a friend of Mr Sandor Samuels...
– Att Moldawsky’s arguments are based on a purported July 23, 2007 Order by Judge Connor, but a valid order that was issued, served, noticed, and entered in a timely manner is yet to be produced…
– Att Moldawsky included in her motion a table of authorities. How did she determine that such case is adjudged by the Law of the State of California ?
– Att Moldawsky, again, produced evidence with no authentication, and insufficient pleadings – by counsel.
The Pinokio Award committee congratulates you, Att Moldawsky, for such unique achievement so early in your career*** – as graduate of UCLA Law School, Class of 2006. Congratulations also to your mentors at Bryan Cave, LLP, Bank of America, and Countrywide. Mr Samuels’ inspiration surely shines between your lines - his precocious student of the art of streamlining, of which he is a master – second to none…
All the best!”
* Ms Moldawsky’s unprecedented achievement was also submitted to Boing Boing – a directory of wonderful things, http://boingboing.net/.
** http://inproperinla.com/09-01-13-moldawsky-notice-of-motion-sanctions-contempt.pdf
*** We shall continue to follow and report the career developments of this promising young attoney.
Posted by Human Rights Alert (NGO) at 9:53 PM No comments: