Mass gathering was convene tongith in Tel Aviv tonight under the slogan: Remembering the assassination, struggling for democracy.

Most of Israelis see the Rabin assassination in the context of the Israeli-Palestinian peace process.  However, the assassination also marks the turning point in unprecedented corruption of government in Israel, and with it - robbing of the people:

Official estimate - 30,000 (compared to 20,000 last year), but I never trust these estimates.  The important point is that the streets were full of young people, and that there is still freedom to demonstrate.

Crowds gather at a rally to mark the 18th anniversary of Yitzhak Rabin's assassination, Oct. 12, 2013.Photo by Daniel Bar On

Youths mark 18 years to the assassination of Yitzhak Rabin, Oct. 12, 2013. Signs read, 'We won't let anyone raise their hand on democracy.'Photo by Daniel Bar-On
Thirty thousand people gathered Saturday night for a rally marking 18 years to the assassination of former Prime Minister Yitzhak Rabin, according to police estimates.
The rally, which was scheduled to commence at 8 P.M., took place at Tel Aviv's Rabin Square, where the prime minister was assassinated on November 4, 1995 by right-wing extremist Yigal Amir. The site, formerly known as Malchei Yisrael Square, was renamed in memory of the late prime minister following his death.
Saturday's rally was organized by a coalition of youth groups and social movements under the title "Remembering the murder, fighting for democracy." The coalition was established ahead of last year's rally to take on the organization of the yearly event.
The vast majority of attendees at this year's rally were members of youth movements who were not born when Rabin was assassinated.
Various speakers were scheduled to speak at Saturday night's gathering, but none were active politicians. Yonatan Ben Artzi, Rabin's grandson, was among the speakers, as were Yair Tzaban, who served as Minister of Immigrant Absorption during Rabin's premiership, and Rabbi Ze'ev Karov, head of the yeshiva at Karnei Shomron. Various musicians were also scheduled to perform.
In his speech, Ben Artzi called upon Prime Minister Benjamin Netanyahu to take advantage of the historic opportunity he is currently facing to achieve peace with the Palestinians. "My grandfather was murdered over peace and you owe this peace to us, to all of us," he said, adding that Netanyahu has the opportunity to simultaneously find a solution to the Iranian threat and Palestinian conflict with the backing of "the entire world."
Hadassah Froman, the wife of the late Rabbi Menachem Froman, said at the rally that, "striving for peace is the lifeblood of this country and will [Israel] will continue [to seek peace] despite those killing and conspiring against it." This land, she added, does not absolve "those who shed the blood of the innocent."
Rabbi Menachem Froman, who served as the rabbi of the West Bank settlement of Tekoa, died earlier this year. He was unique among settler rabbis in that he was a leading proponent of dialogue between Israelis and Palestinians.
Various streets in Tel Aviv were closed to traffic for the event, including Ibn Gabirol, between Pinkas and Shlomo Hamelekh streets, Arlozerov, between Weizman and Ibn Gabirol streets, and all side streets surrounding Rabin Square.
Last year, the annual memorial rally attracted some 20,000 people.
Posted by Human Rights Alert (NGO) at 12:38 PM No comments:

13-10-13 ISRAEL: Vast majority of the public believes that the judges are bribed!

Haaretz daily published a European survey, based on a sample of 1,700 Israeli adults, which shows that 78% (!!!!) believe that Israeli judges take bribes!
Corruption of the judges and the justice system is central to the socio-economic crisis in Israel and beyond...=LINK=http://www.haaretz.co.il/news/law/1.1536267
Posted by Human Rights Alert (NGO) at 9:49 AM No comments:

Posted by Human Rights Alert (NGO) at 3:46 AM No comments:

I usually shy away from certain alternative theories. However, relative to the Israeli Supreme Court, its new building, and Fee Masonry, even Israeli mainstream media raise questions. It starts from the sign at the entrance with an eye, similar to that on the dollar bill, and ends with the pyramids on top of the builiding, from which light emanates - definitely not a traditional Jewish symbols, and unusual architectural elements...
As to the aesthetic value of the building: Some find it beautiful. I find it repulsive, since it appears as a fortress with minimal visibility from the outside in. No transparency - form follows function!
In a case that lasted almost a decade, former Presiding Justice Dorit Beinisch ruled against public access to court records (even in routine civil cases), except for select decisions...
The outcome is rampart judicial corruption.
Current polls show that only 30% of adult Israelis have trust in the judiciary!!! (I believe that it is lower even than in the US???)
LINKS:
To view Scribd records for free, all you need to do is register using facebook or email account.
[1] 09-10-08 Israeli Civil Rights Association v Minister of Justice et al ( 5917/97) Chief Justice Dorit Beinish: The new case management system (Net Ha-Mishpat) would require restricting public access to court records _ Globes (Heb + Eng)
http://www.scribd.com/doc/50621508/
[2] Haaretz - Israel's most respectable daily
מסע קונספירטיבי בעקבות הבונים החופשיים בישראל
http://www.haaretz.co.il/gallery/architecture/1.1700198
[3] NRG (Maariv) - one of Israel's main stream media, online version
http://www.nrg.co.il/online/1/ART2/501/962.html
[4] Youtube - pic gallery
http://www.youtube.com/watch?v=LuhKQFA2prs

Posted by Human Rights Alert (NGO) at 3:28 AM No comments:

13-10-11 US: Where left-right-and-center converge - the current debt/banking system is unsustainable 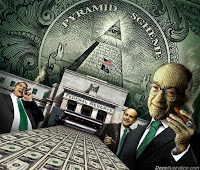 The following are from a lefty news outlet, but they could very well come from the right as well. jz

13-10-12 US and ISRAEL: The courts as center of fraud and corruption

Following is another parallel between the core of judicial corruption in the US and Israel - adulteration of the law, to increase uncertainty in established matters, and thereby increase judicial power and corruption.

ISRAEL:
When I ask attorneys, who was the most corrupt judge in Israel's history, they most of the times name former Preisiding Justice of the Supreme Court Aharon Barak (also affiliated with Yale Law School...Visitng Professor...).  I came to the same conclusion by studying the electronic records of the Supreme Court of the State of Israel over the past 20 years.
When I ask attorneys to provide an example for corrupt decisions of Aharon Barak, the classic example is the Apropim Ruling.
And that is what Wikipedia, the government propaganda organ says on the subject:

Apropim Ruling is a ruling of the Supreme Court [of Israel], issued on April 6. 1995, which was a landmark in contract interpretation in Israeli law.

Justice Aharon Barak [then newly appointed Presiding Justice - jz] ruled, in what became a binding precedent, that Article 25 to the Contract Law (1973), does not require interpretation of contracts in two steps (first - examining the language of the contract, and later, if necessary - examination of the external circumstances), but in a one step manner, whose purpose is to assess the positions of the parties by examining the contract language and the external circumstances simulataneously.

"In contract interpretation, one must investigate the true joint intention of the parties, without being limited to phrases or expressions that were used [in the contract-jz].  In the conflict between the language  of the contract and the intention of its makers - the latter holds the upper hand."

Critics claimed that the ruling undermined the principles of commercial and legal certainty in relationship to contract interpretation.
In January 2011, the Knesset [parliament -jz] passed an amendment to the Contract Law that was meant to overturn the Apropim Ruling and increase legal certainty, but time will pass untill judicial interpretation of the amendment will be formulated.
SOURCE: http://he.wikipedia.org/wiki/%D7%A4%D7%A1%D7%A7_%D7%93%D7%99%D7%9F_%D7%90%D7%A4%D7%A8%D7%95%D7%A4%D7%99%D7%9D

In short: Aharon Barak, with a stroke of the pen, undermined commercial contracts, by creating conditions where a lying witness and a corrupt judge can generate almost any desireable outcome from a given contract, regardless of its explicit language.  The legistlative action was needed, because the ruling was claimed to have a chlling effect on commerce.

United States: California Court of Appeal, 2nd District, Los Angeles
Los Angeles was recognized by FBI already in the early 2000s as "The epicenter of epidemic of real esate and mortgage fraud", which hatched the financial and "foreclosure crisis".
The Los Angeles courts were the leading cause of such conditions.  By the mid 2000s, no attorney in Los Angeles dared to argue fraud in real estate matters in the Los Angeles courts, for fear of retaliation by the judges...
Key ruling in this matter was in the published opinion of the appeal in Galdjie v Darwish.
In it, the California Court of Appeal, 2nd District ruled that verbal modification of written real estate contract are permitted.
With it, the California Court of Appeal, 2nd District undermined the hundreds year old Statute of Frauds, and undermined certainty in real estate transactions.  Conditions were created, where a lying witness and a corrupt judge can generate almost any desireable outcome from a given contract, regardless of its explicit language.
It should be noted that the appeal in Galdjie v Darwish was part of extensive simulated litiagaion, which lasted from 1998-2006, where three appeals were taken from no appealable order or jugment.
LINKS:
08-07-23 Galdjie v Darwish (SC052737) at the Los Angeles Superior Court - Case Summary (not a formal court record) as printed from the online public access system
http://www.scribd.com/doc/34495802/
10-07-22 Complaint filed with US Attorney Office against the California Court of Appeal,2nd District, in Re: Public Corruption, racketeering, in Galdjie v Darwish
http://www.scribd.com/doc/34725529/
10-02-13 Galdjie v Darwish (SC052737) at the Superior Court of California, County of Los Angeles: Alleged racketeering by judges and attorneys in Los Angeles, California - Requesting Jerry Brown's comments
http://www.scribd.com/doc/26837352/
10-07-19 Complaint filed with US Attorney Office against Judge John Segal, Clerk John Clarke, Attorney David Pasternak, Los Angeles Superior Court - in Re: Public Corruption in Galdjie v Darwish (SC052737) - real estate fraud by the court
http://www.scribd.com/doc/34504304/

NOTE: To view Scribd records without paying, all you need to do is register as a Scribd user, using your facebook or email account, and upload any record (even a blank page).
Posted by Human Rights Alert (NGO) at 1:02 AM No comments: