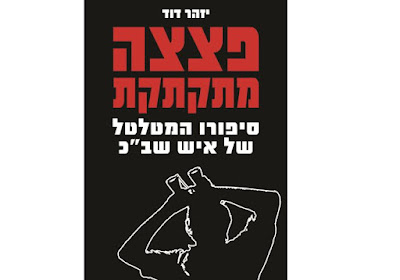 2017-10-10 PALESTINE: routines of the occupation...
===============
The book review, originally published by Maariv daily in April 2016, is a bit long for Facebook, but I thought that it would be important enough to translate for the benefit of readers, who may want to understand the reality of the occupation, which is covered up by media. This is what it looks like, boots on the ground. The alternative (US way) is massive bombing/drones… This is of course only a small part of the picture. The preliminary work involves intensive totalitarian surveillance, based on both sigint and humint, which undermines any semblance of civil society in Palestine. JZ
“A Ticking Bomb. The shocking story of a Shin-Bet man”
Breaking Silence: Former Shin-Bet man Yizhar David wrote an indictment of the Shin-Bet
By Ran Edelist
The book is written in semi-legal style. Beyond personal redemption, what is missing is any discussion of accountability of blood and souls vis a vis the Shin-Bet as an organization, and government policies, which guide it.
_____
For years, I have reasoned (and warned) that part of the Shin-Bet's activity is harmful for Israel's security, particularly the disproportionate oppression of the civilian population and killing of individuals, who are not "ticking bombs". I have attempted to back up my opinion by facts and examples, but I have been limited by my information gathering ability and by censorship.
Anything I and others have done in an effort to have the Shin-Bet redraw its course, is dwarfed by the testimony of Yizhar David, former Shin-Bet man, who wrote a book, which is a detailed indictment from start to finish, and is documented at a level that is almost legal. On the other hand, it is a document of personal decline during the service, down to mental breakdown.
I have no clue what happened in discussions about the book between David and past or present senior Shin-Bet officers. The Shin-Bet denied me an interview with him. Obvious. On the other hand, Channel 2 was permitted to interview him, after it had been demonstrated that Channel 2 was the home channel of "Ad Kan", a right wing investigative agency. I naively thought that one should separate the circus for the plebs (we killed the bad guy) and the political bonus (only this government can do it), from long term national security interests.
I thought that David, in his book, would dare to go beyond that madness and vicious cycle of his tormented soul, and would try to explore his own conduct and Shin-Bet policies from the broader perspective of Israeli national security. The man had already proved himself during service as one who could go beyond Shin-Bet robotics - do what your boss tells you. I expected that he would at least try to evaluate whether the policy of liquidations indeed terminated the Palestinian rebellion, whether the "Lawn Mower" Shin-Bet policy (mow the terror down to grass level, and once it grows again, mow it down again and again and again) proved itself in eliminating the Palestinian national aspirations. Wouldn't it be right to take his personal case as an example of the failure of this policy?
The book's protagonist, Alon, is sketched in his own image: "Regardless of running dozens of operations, which led to the arrest of terror activists, 2-3 a week, it appeared to be a bottomless pit. The number of activists only continued to grow. After each liquidation, dozens of new members would join terror groups. Often, when he had intelligence leads regarding the hiding place of a wanted man, he couldn't get the IDF Undercover Unit to execute the arrest. The Unit was working non-stop in various districts of Palestine At times, they spend whole days getting ready until the final indication arrived for executing the arrest.
Once Yizhar/Alon had understood that working this way he would never be able to exterminate the terror, he proposed a change: "Instead of defining one target for each operation, as previously done, we should define several targets." And it worked. He was decorated and promoted. However, "the large number of targets that was provided to the Units, and the lack of clarity regarding the specific location of the target, led at the end to a large number of the operations, where the target was killed, instead of being arrest".

His reaction, at that time, when he got comments regarding the problematics of liquidation instead of arrests, was: "Alon involuntary grinned, trying to make sure that nobody noticed it. From his point of view, it was one of the biggest advantages of the new system".
It is hard for me to figure out how David could write about it so openly. Maybe he failed to understand the implications from international law perspective. Even if it is assume that it is impossible to build a case on a fiction-like part of a book by a man, who is a bit unstable, such presumed admission still leaves considerable room for accountability, both by Shin-Bet and by Israeli society.
"The Undercover Unit", David writes, "typically returned at the end of such operations without the arrest target, leaving his body and the bodies of others, who were in the vicinity, in the field..." "Initially", he writes, "he felt in each such operation the surge of revenge and satisfaction. With time, he became apathetic, realizing that it wouldn’t be the way to find solace for his ailing soul." On the way, he was promoted, now he was seated in front of a large plasma screen, a district commander, issuing operations: "The Unit was assigned 8 targets. The first was a 22 year old guy, who had declared himself the head of Tanzim, after all his predecessors had been liquidated or arrested. Alon couldn't understand, how there would still be demand for the position, whose end was known in advance - death or arrest... The Unit's vehicle arrived at the crossroads, where Khaled was surrounded by other youths. A battle ensued, at the end of which 6 bodies were counted, in addition to Khaled's."
When he reached the scene, "he noticed two small bodies. At first, he tried to avoid them, to save himself the sight. But something inside him didn't allow him to ignore the small bodies. He went over, and realized that they were the bodies of small children. Twelve year olds at most - children! He choked. He couldn't remove his eyes from the small bodies. A sharp pain cut his chest. He heard a loud rolling scream inside, tearing his soul apart. They are merely kids!!! (3 exclamation marks in the original - RE]... They were not regular kids. Their bodies were perforated by bullets... The blood of these kids and the image of their bodies continued to follow him and torment him. Recently, he has realized that he is facing a breakdown, that he must seek help."
Apart from the book and David - in August 2014 the Mohammed Deif was located. The house was bombed. His wife, his son, his daughter and his baby son were killed. Deif is still with us. Even if he were liquidated then, a new Deif would have arisen, whose wife, son, daughter and baby son would have been liquidated. Because that's how it is. And that's what drove the protagonist of the book crazy. He decided to break his contract and retire before he would need to be hospitalized. But he hesitated:"Immediately he erased the idea. If you let them know that you are leaving tomorrow, the Shin-Bet wouldn't let you go. The would liquidate you. Or maybe they would place you in compulsory psychiatric solitary care. So that you wouldn't divulge anything that you know."
I assume that this is part of the personal paranoia, but the book was written years later. He is by now a successful, esteemed educator. His souls is still boiling, but his head is supposed to be cooler.
When he confronts the psychiatrist, who tries to have him hospitalized, he tells her: "Dozen of times during my Shin-Bet service I faced decisions, where I had two options. The first was the easy one, and better for me, the other was the more difficult and risky for me, but better for the nation. I never hesitated, and I always went for the one that was difficult and dangerous for me, but better for the nation. I have seen cowards like you [Alon says to the psychiatrist - RE], and unfortunately, there are many of them in the Shin-Bet as well. And it costs Israel blood. In the case of the two of us, it is only misunderstanding".
Even if David is willing to turn himself into a sacrificial lamb of sorts for what he and his friends have perpetrated, still, what is missing here, beyond the personal redemption, is any discussion of accountability of blood and souls vis a vis the Shin-Bet as an organization, and the government policies which guide it.

Posted by Human Rights Alert (NGO) at 6:48 AM No comments:

Posted by Human Rights Alert (NGO) at 6:39 AM No comments: