12-10-14 Dispatch from Jerusalem: Corruption of judges and attorneys, chicken and the egg?

I often wondered, which came first, judicial corruption, prosecutorial corruption, or widespread corruption of the legal profession. Now, watching earlier stages of government corruption in the State of Israel, the answer is - the judges are at the cutting edg!

1) Israel Police Chief calls upon the State Prosecution to appeal the partial acquittal of Former Prime Minister Olmert on corruption charges.
Haaretz daily reports that the Chief of Police is pressuring the State Prosecution to appeal the unusual rulings that came from the Jerusalem District Court.  Olmert was convicted on Breach of Loyalty, but was acquitted in two other corruption charges, where the District Court accepted the basic facts presented by the State Prosecution. E.g., his loyal secretary received in his bureau envelopes full of hundreds of thousands of dollars in cash from various interested persons.
Today's Haaretz editorial on a related matter counts the output of top government convictions in recent years - 1 (one) President and 6 (six) Cabinet Ministers.
US comparison: In the United States, no such person would ever be prosecuted.

2) Pressure mounts on the Israel Bar Association to cease its demands for the removal from the bench of Tel Aviv District Court Judge (Deputy Presiding Judge) Vardah AlSheikh
Judge AlSheikh (the equivalent of Jed Rakoff in USDC, SDNY) handles many of the heaviest corporate and financial regulation cases.  In one such case, she was caught falsifying court transcripts.  She did it for a purpose: To file a disciplinary complaint against an attorney, who appeared before her, and challenged her decisions.
So far, the Bar's requests to have AlSheikh removed from the bench were denied by: a) The newly minted Presiding Justice of the Supreme Court, and b) The Instpectro General of the Judiciary.  Needless to say, both are judges themselves.  Moreover, since data mining studies show that falsification of electronic records is now commonplace in the courts of the State of Israel, it is also clear, why no judicial authority could impose sanctions on Judge AlSheikh for such conduct.  The Bar was reported to have taken the case before the Minsiter of Justice, although in my opinion, he is the least likely to take any actions against corruption.  Other reports suggest that pressure is mounting on the Bar to cease its demands in this matter.
It should be noted, that the Israel Bar Association did not pick this fight because of the Fraud on the Court per se, but because of the attempt to harm an attorney.
US comparison: Any bar association in the US calling for the removal of a judge from the bench is unheard of.

3) An attorney protested the falsification of his client's court records in the Detainees' Court
In a case that was reported a couple of years ago, a judge in the Detainees' Courts (administered by the Ministry of Justice) was caught falsifying court records regarding proceeding that never took place, and planting a simulated court order, as resulting from such proceeding.  The harmed client's attorney reported it to the press!  The spokesperson of the Ministry of Justice responded: "A tempest in a teapot".  No sactions taken against the perpetrating judge.
US comparison:  Attorney challenging falsification of court records by a judge is unhread of. Even Richard Fine, who challenged judicial corruption, refused to address the falsification of judicial records in his own imprisonment, when he was finally made aware of it.  Challenging the integrity of the court's record system itself by attorney is unheard of.

12-10-13 NYPD RAMPS UP HEAT ON PROTESTERS: Sinking to New Lows in the Process


NYPD RAMPS UP HEAT ON PROTESTERS: Sinking to New Lows in the Process

Police throw out OWS information fliers into the street. by Cory V. Clark
New York, New York October 11, 2012- NYPD is turning up the heat on protesters with increased violence, arrests and legalized theft of personal property.
"The intensity of harassment fluctuates from day to day depending on the white shirt in command that day," said Damien Shark, 42.
At 6PM NYPD moved in to clear protesters from in front of Trinity Church in order for the church to clean the city sidewalks they claim to be responsible for.
During the effort to remove protesters, Officer Price of the 7th precinct violently shoved past a Red Cross medic to remove a tarp in which information about Occupy Wall Street was laid out. Officer price then threw the paper materials, tarp and storage devices into the street temporarily obstructing traffic.
Earlier in the evening three protesters in Harlem were arrested at a community supported occupation they had started several days before. NYPD refuses to comment on the arrests claiming it was for disorderly conduct.
At 9 PM police enter the encampment in front of Trinity attempting to grab personal property from protesters, claim that it was abandoned even while the owner was sitting next to the item, abusing the term reasonable in order to justify the theft of property. Including the attempt to grab several thousand dollars worth of art from Philadelphia Mixed Media Artist Danielle Finger, who has several galleries and national art shows under her belt, including a recent show for the National Adoption Center where a piece she painted sold for as much as a Zoe Strauss.
This is the second artist to be targeted by NYPD at Trinity, just three weeks ago a young woman of color named Sparrow was knocked unconscious by an NYPD sergeant then arrested in the hospital while trying to protect a painting of hers that had been illegally taken and thrown in a trash truck for disposal.
Just two hours later Police reentered the encampment to make a second attempt at grabbing personal property. Police confiscated the walker of a disabled protester and threw it in the trash. Other protesters retrieved the walker condemning police for targeting a disabled person.
After a twenty minute show down over the information tarp and whether it was considered permanent or semipermanent, some discussion with the lieutenant on scene, police threw food donated to the protesters into the street again obstructing traffic temporarily.
Once the police returned to the other side of the street a protester known as revolution threw a slice of pizza that he had picked up from the street and threw it at a police cruiser. Protesters ushered him away before police could cross the street to make the arrest.
The protester who threw the pizza later returned to the encampment in the early morning hours, police apparently decided not to pursue the issue.
"NYPD threw out crates of food out in the street endangering the lives of drivers and Occupiers, so I thought if they can do it why can't I,there shouldn't be two standards of behavior, one for us and another for NYPD, " said Revolution who is from Hot Springs, Arkansas.
Police returned just a few hours before dawn for a forth engagement with protesters. Finding many of the protesters prepared for the harassment police chose to direct their attack whole heartedly against the disabled.
Confiscating without providing a confiscation receipt for a second time the walker of one disabled person and ordering another disabled transsexual person to sleep in her wheel.
"A white shirt told me that I have to sit in my chair or he would take it," said Aqua Star-Nyght, 26 from Brooklyn. "I wasn't allowed to sleep laying down like other protesters, I felt like I was singled out because I'm trans, and disabled no other reason."


She remained defiant and the lieutenant eventually backed off.
Police are not permitted to confiscate personal property without reasonable proof of abandonment, according to numerous federal court cases, including Lavan Vs. The City of Las Angeles. Where it was the opinion of the court that the confiscation of property by police without such proof was a violation of the Fourth and Fourteenth Amendments.
"In this case the purpose of such confiscations is that of harassing persons exercising their First Amendment Rights as well and there fore is a violation of the First Amendment as well," Said Danielle Finger, 23.
A little after dawn police came in to awaken protesters still asleep in order for the private maintenance company that cleans the sidewalks for Trinity Church to wet down the sidewalk with a garden hose.
Moments after they moved in to kick protesters awake they arrested Aaron Williams, 20 years old from Syracuse, New York apparently for blowing a hand held air horn. He was not informed what he was being charged with and NYPD refuse to give information on what precinct he was being taken to.
" It seems that the goal of NYPD is to break protesters, we need to pace ourselves to endure, they know we wont be moved, so we just have to surf the waves they throw at us," said Fathema Shadidi, 57 a Red Cross Crisis Intervention Medic.
Many of the protesters show signs of Post Traumatic Stress Disorder, often snapping at each other, clearly in a state of constant terror. Often Protesters will jump at the sight of an NYPD officer, or become very aggressive in their presence.
"People tend to take their stress out on themselves, they internalize the abuse," said Shididi. " In the short term you will see a lot of bouts sleep deprivation and exhaustion, in the long term numbness and ultimately PTSD and severe depression."
"This is crazy people shouldn't have to endure this sort of harassment for exercising their First Amendment rights, this is the kind of sh*t we condemn countries like Syria and China for, are we the pot calling the kettle black here or what," said Chino Futuristic, 25 from El Paso, Texas.


An interesting spectrum, from the Father of Reaganomics to MIT's Noam Chomsky, call for boycotting the 2012 US presidential election!  jz
___

Boycott the vote! It only legitimizes the illegitimate... Where should Occupy go next? Civil Disobedience in the footsteps of Thoreau and Gandhi!
http://www.scribd.com/doc/75348301/ 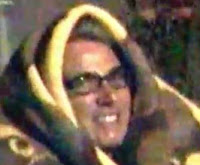 Posted by Human Rights Alert (NGO) at 3:16 AM No comments: