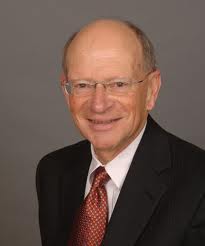 Any information on this matter would be greatly appreciated, for the public's good...

Posted by Human Rights Alert (NGO) at 6:25 PM No comments:

Comment:
The American way - let's socialize bad banking investments, privatize the profits...
BofA toxic derivative assets are estimated at $75 TRILLIONS, while the US GDP is estimated at only $15 TRILLIONS...
JZ

Why Iceland Should Be in the News, But Is Not
By Deena Stryker

An Italian radio program's story about Iceland�s on-going revolution is a stunning example of how little our media tells us about the rest of the world. Americans may remember that at the start of the 2008 financial crisis, Iceland literally went bankrupt.  The reasons were mentioned only in passing, and since then, this little-known member of the European Union fell back into oblivion.

As one European country after another fails or risks failing, imperiling the Euro, with repercussions for the entire world, the last thing the powers that be want is for Iceland to become an example. Here's why:

Five years of a pure neo-liberal regime had made Iceland, (population 320 thousand, no army), one of the richest countries in the world. In 2003 all the country�s banks were privatized, and in an effort to attract foreign investors, they offered on-line banking whose minimal costs allowed them to offer relatively high rates of return. The accounts, called IceSave, attracted many English and Dutch small investors.  But as investments grew, so did the banks� foreign debt.  In 2003 Iceland�s debt was equal to 200 times its GNP, but in 2007, it was 900 percent.  The 2008 world financial crisis was the coup de grace. The three main Icelandic banks, Landbanki, Kapthing and Glitnir, went belly up and were nationalized, while the Kroner lost 85% of its value with respect to the Euro.  At the end of the year Iceland declared bankruptcy.

Contrary to what could be expected, the crisis resulted in Icelanders recovering their sovereign rights, through a process of direct participatory democracy that eventually led to a new Constitution.  But only after much pain.

In an article titled Another Weapon for OWS: Pull Your Money Out of BofA, Matt Taibbi wrote that �when it comes to commercial banking, Bank of America is as bad as it gets.� He said he believed the markets seemed to agree as the bank had a credit downgrade recently �to just above junk status.�

He continued: The only reason the bank is not rated even lower than that is that it is Too Big To Fail. The whole world knows that if Bank of America implodes � whether because of the vast number of fraud suits it faces for mortgage securitization practices, or because of the time bomb of toxic assets on its balance sheets � the U.S. government will probably step in to one degree or another and save it.

After the credit downgrade in September, Bloomberg reported that Bank of America �moved derivatives from its Merrill Lynch unit to a subsidiary flush with insured deposits�� Taibbi said the transfer involved trillions of dollars in risky derivatives contracts.

According to Bloomberg: The Federal Reserve and Federal Deposit Insurance Corp. disagree over the transfers, which are being requested by counterparties, said the people, who asked to remain anonymous because they weren�t authorized to speak publicly. The Fed has signaled that it favors moving the derivatives to give relief to the bank holding company, while the FDIC, which would have to pay off depositors in the event of a bank failure, is objecting, said the people. The bank doesn�t believe regulatory approval is needed, said people with knowledge of its position.

Here�s how Ryan Chittum explained it in the Columbia Review of Journalism: Bank of America moved risky insurance contracts to a taxpayer-insured company, ostensibly to save money. The FDIC, which would now be on the hook for losses if the derivatives collapse, is not happy, and the move raises more questions about the health of Bank of America, which has already seen its market value sliced in half this year.

Kirsten Pittman reported in The Charlotte Observer that more than a dozen Democratic members of Congress are concerned about the reported transfer �of financial instruments from Merrill Lynch into the bank�s deposit-taking arm��which they say �could put taxpayers on the hook for big losses � three years after the bank received billions in bailouts from the federal government.� The Congressmen wrote to federal regulators to ask why they allowed the movement of derivatives into the retail bank, which has deposits that are insured by the FDIC. In a statement, Rep. Brad Miller of North Carolina said, �This kind of transaction raises many issues of obvious public concern. If the bank subsidiary failed, innocent taxpayers could end up paying off exotic derivatives.�

William Black, a professor of economics and law at the University of Missouri-Kansas City and a former bank regulator, said, �The concern is that there is always an enormous temptation to dump the losers on the insured institution. We should have fairly tight restrictions on that.�

So much for financial reform. Just three years ago, Bank of America received $45 billion in bailout money during the financial crisis. It doesn�t seem that much has changed since 2008, does it? 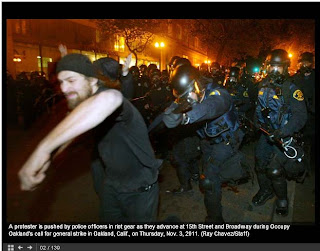 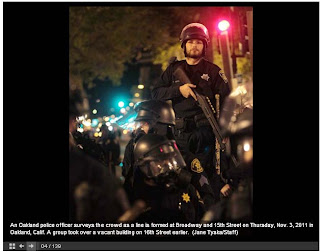 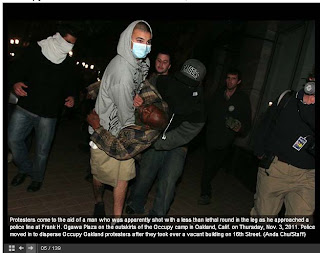 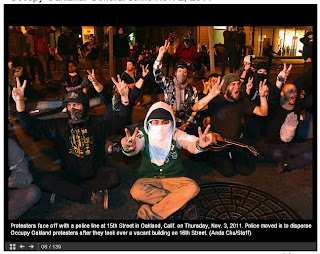 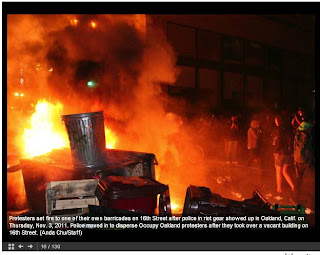 More: Occupy Oakland
The Oakland general strike called by Occupy Oakland drew thousands Wednesday for rallies and marches. The mostly peaceful event turned chaotic early Thursday after protesters took over a vacant building and police moved in, firing tear gas and flashbang grenades.
7 a.m. Protesters' blockade prevents truckers from entering Port of Oakland
Fences and dumpsters dragged across the roadway at 3rd and Adeline streets are preventing trucks and other vehicles from entering the port this morning. About a dozen protesters have had some scuffles with truckers.
Monique Agnew got in front of a truck with a camper shell that was forced its way in. When it charged, she hit it with a
sign she was carrying.
She said she has been there for several hours.
"These people tried to kill us. I can't believe they are being that aggressive over a paycheck, over your own people fighting for you."
Most trucks are just turning around and going back the other way, down Middle Harbor Road.
One big rig is having trouble turning around, though, since it can't turn around because the street is too narrow.
3:30 a.m.: Protesters call it a night
Organizer Mario Fernandez, 27, got on a megaphone, performed the customary mic check to get the crowd's attention and said: "It's late. I feel that we should go back to camp for a 3:30 a.m. rally."
But they are not rallying. It was a joke. They're going to bed.
A handful of determined strikers were sent to the picket line at Third and Adeline in the remains of an effort to keep the Port of Oakland closed.
About 15 protesters remain near the police line, which is still about 200 strong. But, police, too are beginning to leave.
-- Sean Maher
3:28 a.m. Protest has mostly ended
Only a handful of protesters remain, with a few sitting in front of a line of police on Broadway. Those who remain say they are committed to peace and will not antagonize the officers.
3:12 a.m. Crowd continues to dwindle, but some action continues
There's probably only 100 protesters left. The helicopter is back overhead. An ambulance is arriving.
The crowd has continued to thin out, however the police helicopter has turned on its spotlight.
2:50 a.m. Calm settles in
Action is winding down.
At the police line on Broadway, a man plays "Blitzkrieg Bop" on a mandolin.
2:49 a.m. Riot police begin to disperse
Some of the riot police are
dispersing, to cheers from the protesters.

The fire department arrived to put out trash fires on by BART station at 13th and Broadway.
Earlier, a man walked by pushing a bicycle yelling, "Police are not our enemy!"
2:35 a.m. Crowd's energy is waning
The front line of the protest is mostly quiet, although some protesters continue to yell. Police aren't moving. Drums continue in the camp, but the crowd's energy is waning. Chanting has all but ceased.
2:10 a.m. Injured man is taken away in ambulance
After protesters called for help several times, an ambulance finally arrived to take away the injured man.
Graham Holoch, a student at the California college of the arts in Oakland, was a volunteer medic who tended to the man, using medical supplies he brought in a backpack.
"When we got him on the stretcher," he said, "his vitals were pretty shaky."
Holoch said he believed the man had been shot in the knee with a rubber bullet and gassed.
His friends called the man's relatives and his pastor.
"He seems fine, but it's definitely better to get him medical attention," said Holoch, who is also a photographer.
As paramedics carried the man to the ambulance, a bruise could be seen on his knee.
Before leaving, one paramedic told the volunteer medics: "By the way, we do support what you're doing."
-- Sandy Kleffman
class="bodytext">