Only a few months ago, former Justice Minister, Prof Daniel Friedman said: “The Attorney General cannot shut the mouth of the entire State...” Well, it appears that the Attorney General is working at it…. And on such Voltaire said: "To learn who rules over you, simply find out who you are not allowed to criticize". 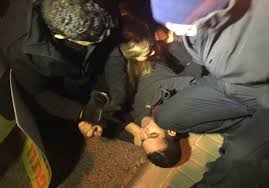 Figure: Meni Naftali, former Netanyahu residence chief caretaker, on Christmas Eve, after a violent attack by Israel Police during a demonstration against Attorney General Mandelblit and government corruption. Earlier in 2016 Naftali won a lawsuit claiming abusive conduct by Sarah Netanyahu. [i] The lawsuit revealed Mrs Netanyahu to be a frequent consumer of large volumes of alcohol, leading her to abusive, at times physically violent conduct against employees. The lawsuit helped break a code of silence in Israeli media, regarding the bizarre conduct of the Prime Minister and his spouse, where the latter is often the one deciding on crucial national security matters... That, while many doubt her mental condition. [ii] At one point, media claimed that Mrs Netanyahu’s mental condition was used to prevent her criminal investigation. [iii] It is likely that Naftali holds major evidence of criminality by the Netanyahu couple relative to embezzlement of public funds. Mrs Netanyahu was involved in the most bizarre practices, such as forcing the residence staff to collect empty bottles, then pocketing the refund money (an affair dubbed “bottlegate”). [iv]

Figure: Daphni Leef arrested by police in June 2012, during the wave of social protest, which she led. She was later subjected to false criminal investigation of “assaulting police”, which was dropped only in 2014. Police appeared on the stand and lied to the laughter of the public in the courtroom, where videos were screened by the defense, showing that police were lying. [v] A series of such false criminal prosecutions against protest leaders was effectively used to suppress political protest in Israel. Leef and Naftali met for the first time a couple of weeks ago, in one of the Saturday night demonstrations in front of the Attorney General’s residence. It was the first time that Leef heard that Netanyahu, his family and his advisors were hysterical during the social protest wave, being sure that the demonstrators are going to march on the PM in Jerusalem and cause his toppling. Leef never realized her power during that time.
http://www.haaretz.com/israel-news/.premium-1.583212 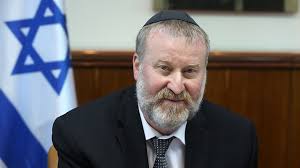 Figure: Attorney General Avichai Mandelblit, Netanyahu confidant, refuses to permit true criminal investigations of the Netanyahus and other senior government officers in the face of rampant government corruption and blatant evidence of criminality. [vi] The latest in a never-ending string of corruption scandals [vii] involves the purchase of three submarines from German manufacturer ThysenKrup, which the professional IDF and Ministry of Defense objected to as unnecessary, and where Netanyahu’s confidants apparently collected huge commissions. [viii] Corruption in major IDF procurement is perceived as crossing the line of public tolerance. A true criminal investigation against Netanyahu or other senior State officers would have required their suspension or resignation. To subvert due process, Attorney Mandelblit invented a system where instead of criminal investigations Police is only permitted to conduct “examinations” in such cases, under his own micro-management. Media claim that he actively subverts even such “examinations”. 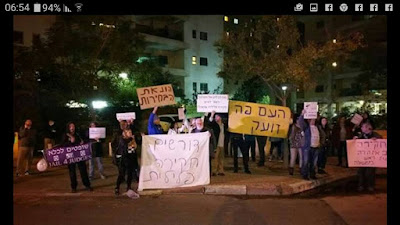 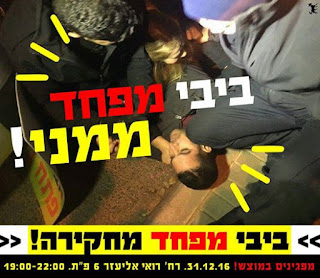 Figure: Social networks poster for the December 31, 2016 Saturday night demonstration in front of Attorney General Mandelblit’s residence: “Bibi is afraid of Meni”.
______
OccupyTLV, December 25 – the violent abduction last night of Meni Naftali by Israel Police in front of the residence of Attorney General Avichai Mandelblit astonished many of the participants in the small, routine, Saturday night demonstration. Naftali himself appeared shell-shocked. Participants in the demonstration did not number more than 30-40, from children under 10 years of age to “mature’ women (not to offend them by calling them old). The routine chants were, “Both a friend and an investigator – Mandelblit resign!”, “The public demands – criminal investigations!”, “Government, corporations – crime organizations!”.
Already at the beginning of the routine demonstration, around 7:30 pm, some experienced participant said that it looked like police were planning violence this time around. The signs were obvious: A line of police in a threatening stance on the opposite sidewalk, some of them wearing ski masks like warmers, hiding their faces, and others with no visible name tags.
Participants of the demonstration were not permitted to step down from the sidewalk to the street. However, just as happened the week before, police permitted one of the neighbors to step into the street and shove himself within inches into the demonstrators’ faces in an attempt to provoke violence. The neighbor was a “values” person, just like Mandelblit himself - wearing a black yarmulke. [Orthodox Jews in Israel have taken into the habit of referring to themselves as “values” people, in contrast with secular Jews. At the same time, some of their political, and religious leaders are notoriously corrupt. Religious, military, and political leaders of the orthodox variety have also been convicted in a series of serious sex crimes cases.]
Such provocations were unsuccessful last week and last night as well. The demonstrators were not even close to being a violent crowd.
Then, around 8:30 pm, Naftali was standing in the back of the sidewalk, near the drinks and refreshments (there were Hanukkah candles and latkes – Hanukkah potato pancakes - as well… ), where all of a sudden, for no reason at all, a group of about five policemen stormed and violently abducted him.
The end of that move is seen in the figure above– where Naftali is subdued on the ground, later to be handcuffed and transported to the police station. Naftali and two other demonstrators were released hours after midnight.
Communications have been conducted with the Association for Civil Rights in Israel in recent weeks, in an effort to obtain opinions regarding the legal boundaries regarding conduct of such small protests guards. In the case of protest guards in front of the Supreme Court,, it appeared that the law was relatively clear. Although the Supreme Court Guard and the Israel Police initially tried to fabricate and enforce their own law, they eventually permitted such protest guards to take place.
In contrast, when it came to protest guards in the proximity of the residences of public service officers, it appeared that the legal situation is vague, and eventually – was at the discretion of the Attorney General…
Therefore, there is good reasons to suspect that the violent abduction of Meni Naftali last night was conducted with the approval, if not by instructions of Attorney General Avichai Mandelblit himself…
Only a few months ago, former Justice Minister, Professor Daniel Friedman stated in a Knesset Constitution, Law and Justice Committee hearing: “The Attorney General cannot determine what the law of the State is, to shut up the mouths of the entire State, never permit the expression of opinion...” [ix]
Well, last night it appeared that Attorney General Avichai Mandelblit was exercising exactly such powers…
On such matter Voltaire said: "To learn who rules over you, simply find out who you are not allowed to criticize".
Beyond that, if you inspect any area of material government corruption in Israel today, scratching a bit below the surface, you find that the Godfather, patronizing the corruption is the Attorney General – by preventing true criminal investigations of government officers, and/or their true criminal prosecution. It is an undeclared generalized “too senior to fail, to senior to jail” policy, applied to:
The unreasonable concentration of power in the office Attorney General in Israel (a nation with no constitution) has been the subject of legal and political discussion for years. [xvi] However, given the obvious political expediency of the current situation for the party in power, no reform has ever been implemented. Regardless, the current levels of both government corruption and blatant disregard of the law by the Attorney General are unprecedented in the history of the State of Israel. Possibly, they are related to the unprecedented length of tenure of Netanyahu.
The maintenance of civil society requires a working system of checks and balances – which is an unstable equilibrium. On the other hand, once government is corrupt, conditions tend to become stable at the new state of affairs. Therefore, it is difficult to imagine correction of current circumstances in Israel, where the Godfather holds such excessive power and authority, absent fundamental regime change.

Posted by Human Rights Alert (NGO) at 7:20 AM No comments:

Posted by Human Rights Alert (NGO) at 2:07 AM No comments: