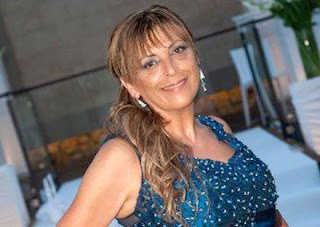 OccupyTLV, August 13 -- compulsory psychiatric hospitalization of Joelle Ben Simone came to an end this past Tuesday, with her release from Eitanim hospital in Jerusalem. Only then were the underlying records discovered through the efforts of activists and several attorneys, who came to her assistance.
The records are published, with Ben Simone's agreement, as part of her protest.

Ben Simone protested for four days in front of the office of Justice Minister Ayelet Shaked against family court corruption. She demanded to speak with the Minister. Finally, Minister Shaked agreed to speak with her for a few minutes.
Soon after, steps were taken to force Ben Simone into psychiatric hospitalization.

The law in Israel is clear, involuntary admission is permitted only if the person poses immediate, material danger to self or others. The records show how the law was abused. 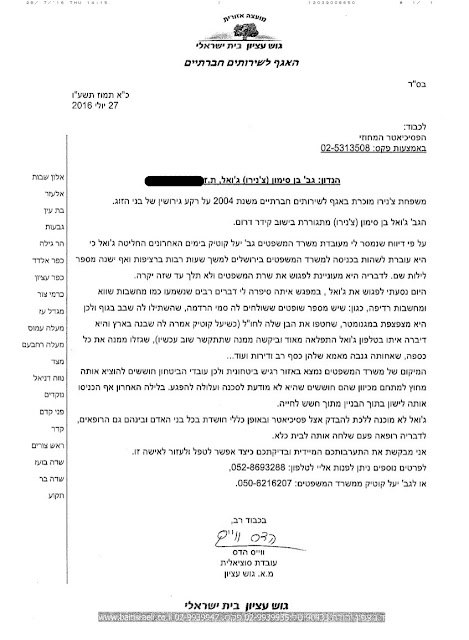 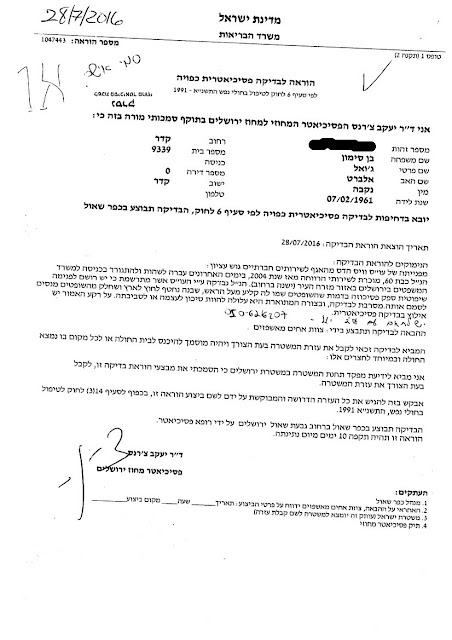 Figure 3: Jerusalem District Psychiatrist Dr Jacob Chernas July 28, 2016 Order
_______
July 28, 2016 Order by Jerusalem District Psychiatrist Dr Jacob Chernas
Dr Jacob Chernas's order compelled Ben Simone's admission to a psychiatric hospital in Jerusalem for examination, falsely stating as justification that "she may pose danger to herself or others".
On the order, someone added in handwriting: "to be coordinated with Attorney Yael, 050-621-6207".
One must wonder for what reason the Ministry of Justice Freedom of Information Officer, who was no personal acquaintance of Ms Ben Simone, had to be involved in her psychiatric examination...
The Order was immediately executed, and Joelle was taken from her home to the psychiatric hospital. 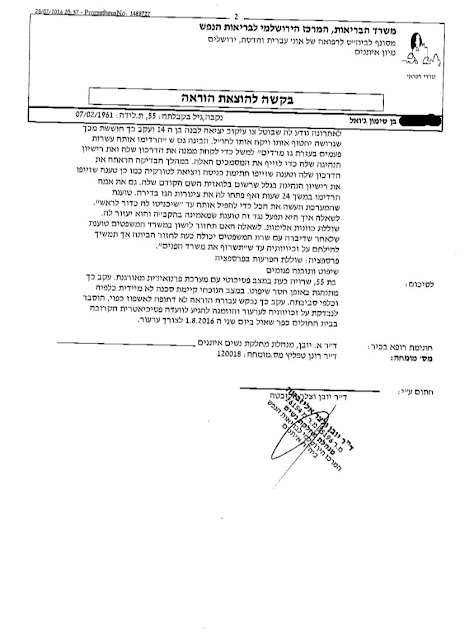 July 28, 2016, 20:57, Dr Elizabeta Jovan Weltzer, Psychiatrist at Eitanim hospital - Request for Compulsory Hospitalization
The request, issued on the same evening, correctly stated Ben Simone's grievances regarding judicial corruption, and it was obvious about the fact that Ben Simone's protest in front of the Justice Ministry was a key issue in the report. The request correctly stated that Ben Siome had no previous psychiatric treatment or hospitalization, negated any violent tendencies, but found erratic judgement and provided the diagnosis of "psychosis".
Regardless, Dr Jovan Wetzler asked for compulsory hospitalization order, while stating that the patient was informed of her right to appeal the decision. 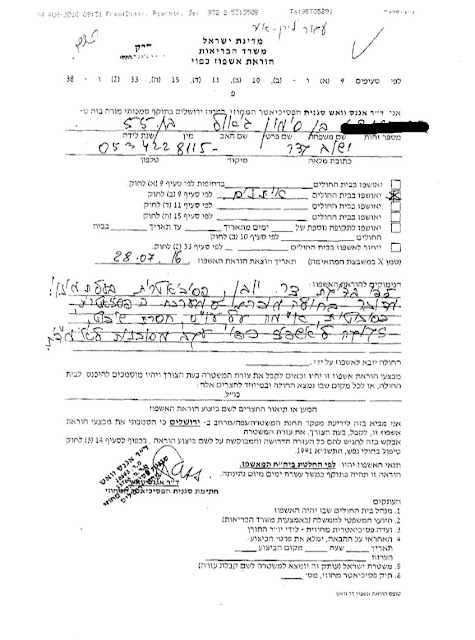 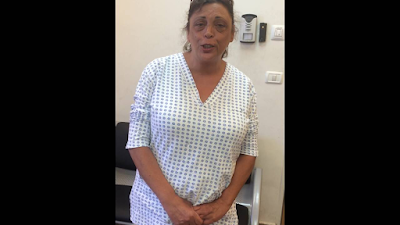 Activists Lory Shem Tov and Moti Leybel, assisted by several attorneys, started efforts to discover the records and release Ben Simone. They widely published denunciation of Minster of Justice Ayelet Shaked for her conduct in this case, as well as hidden camera videos of medical staff of the hospital making various false statements regarding the case. The activists also reported that the medical staff refused to produce any records of the compulsory hospitalization, and that medical staff claimed that Ben Simone "waived" her right to appeal the decision.
Such claim was ludicrous, given that the records later showed that Ben Simone had been diagnosed "psychotic" and of "erratic judgement" - therefore, legally incompetent.
https://www.facebook.com/lori.shemtov/videos/1311053652239867/


Saturday night, August 6, 2016 - Ministry of Justice Press Release By Saturday night, given the wide circulation of reports on social networks of Ben Simone's case (no word on mainstream media) , Ministry of Justice Spokesman issued a press release, denying any involvement by Justice Minister Ayelet Shaked in the case, and threatening those who liable the Justice Minister.

Tuesday, August 08, 2016 - medical committee meeting
The meeting was held under pressure by activists. Several attorneys volunteered to appear on behalf of Ben Simone, and activists appeared as "character witnesses". Attorney Inbal Bar-On later stated in an interview that she considered conduct of the medical staff during the meeting unreasonable, and that efforts were made to continue the compulsory hospitalization.
However, due to the coordinated action of the support group, Ben Simone was released on the same day. 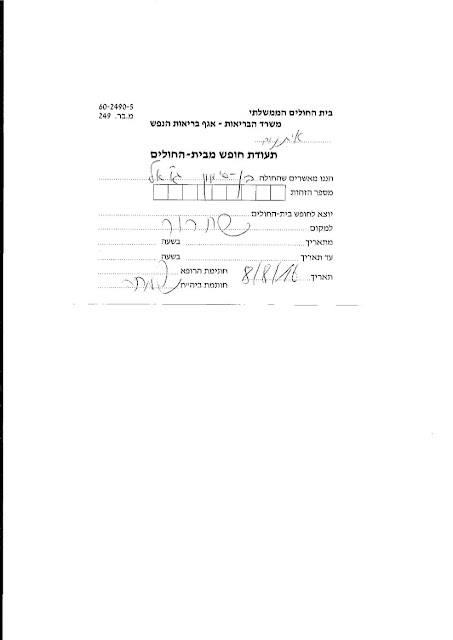 Real mental health patients are criminalized before compulsory hospitalization
The entire episode is striking in comparison with the treatment of real mental health patients. Last year, non-profit association of psychiatric patients' families issued a position paper, calling for reform of compulsory hospitalization procedures.
The families claimed that they had no access to obtain compulsory hospitalization orders from the district psychiatrists in cases of violent episodes by previously diagnosed, previously hospitalized family members.
The families claimed that the district psychiatrists routinely referred them to police, demanding that they first file criminal complaints, leading to detention of their family members. Psychiatric examination by order of the district psychiatrists were routinely conducted in detention centers. The families objected to such practices, which led to criminalization of mental health patients.
A culture of repression by public service employees
The entire Ben Simone episode is also striking, since its shows a series of professionals, who are public servants -- an attorney, who is the Freedom of Information Office of the Ministry of Justice, a social worker, and at least three psychiatrists - operating expediently and in concert to deprive a protester of her freedom at the whim of the Justice Minister.
The case reflects the culture of a repressive regime.

Conditions in the US are not much different
In 2009-10, in Los Angeles County, California, two attorneys were hospitalized by Sheriff Lee Baca, after they protested judicial corruption:
In both cases, the attorneys were held by Sheriff Lee Baca under false booking records. [ii]
Today, Sheriff Lee Baca is facing a prison term, following various federal corruption investigations. [iii]
However, as was the case a decade earlier, during the notorious Los Angeles Rampart scandal, which was described as LAPD corruption, the underlying core judicial corruption in LA County has never been addressed . Prof. Erwin Chemerinsky, then at USC, today Dean of UC Irvine law school wrote about the LA County justice system: "This is conduct associated with the most repressive dictators and police states" and judges must share responsibility when innocent people are convicted." [iv]
The Human Rights Alert (NGO) submission for the first ever UN Human Rights Council review of Human Rights in the United States (2010), documented conditions of the justice in LA County, California. [v] The outcome was a note in the Council's final report: " C orruption of the courts and the legal profession and discrimination by law enforcement in California".