Amazing how smart Barofsky got once he left office... jz
_______
The Daily Bail steve@dailybail.com via google.com

Barofsky On Bailouts, Bernanke And Too Big To Jail

Video URL: http://www.youtube.com/watch?feature=player_embedded&v=wQp_zhrPefo
Barofsky says bank culture hasn't changed since crisis.
And why would anything change with Zimbabwe Ben at the helm of both the helicopter and the printing presses.  Borrowing at 0% and speculating with a taxpayer guarantee is a hell of a business model.
READ MORE:
http://dailybail.com/home/barofsky-on-bailouts-bernanke-and-too-big-to-jail.html?utm_source=feedburner&utm_medium=email&utm_campaign=Feed%3A+TheDailyBail+%28The+Daily+Bail%29
Posted by Human Rights Alert (NGO) at 3:07 PM No comments:


The cases of the Partiot and Iron Dome missile systems are not unique at all.

Such cases should be deemed coporate welfare galore, and they also reflect widespread corruption in the DoD.
jz
____
The $400 Billion Military Jet That Can't Fly On Cloudy Days
Posted: 10 Apr 2013 05:53 PM PDT
The $400 Billion Military Jet That Can't Fly in Cloudy Weather 100th F-35 Being Built, None Yet Operational In January, the Lockheed Martin production facility in Fort Worth, Texas, reported it was...
READ MORE:
http://feedproxy.google.com/~r/TheDailyBail/~3/5PNsGaUFTjQ/the-400-billion-military-jet-that-cant-fly-on-cloudy-days.html?utm_source=feedburner&utm_medium=email
Posted by Human Rights Alert (NGO) at 12:05 PM No comments:

The letter ends:
"Israelis, I am Samer al-Issawi. Hear my voice, the voice of remaining time - mine and yours. Release yourselves from greedy power hunting. Don't forget those you have incarcerated in prison and camps, between the iron doors that imprison your consciousness. I'm not waiting for a prison guard to free me, I'm waiting for the one who frees you of my memory."
Needless to say, the above is equally applicable to Americans and the hunger strikers in GITMO.  The difference is that in Israel there is direct contact between Israelis, who oppose the treatment of Palestinians, like al-Issawi, and the Palestinians.
The original letter was written in Hebrew.  The Palestinian leadership used the time spent time behind bars to educated itself, gain academic degrees, etc.
Haaretz, the oldest and most respectable newspaper in Israel, is a unique creature - with an editorial page that champions Human Rights, and a strong business section.
The edior, Aluf Benn, and the publisher, the Schocken family, should be recognized for their courage.  Haaretz is routinely in court, due to efforts to silence it. Accordingly, from my experience, the limit is publishing news regarding corruption of the Israeli courts.
The contribution of generations of the Schocken family, refugees from Nazi Germany, to Israeli and Jewish culture is enormous: Through Haaretz, through the Schocken book publishing, through lifetime support of SY Agnon (later literature Nobel Prize winner), and through its library of medieval Jewish manuscripts.
JZ 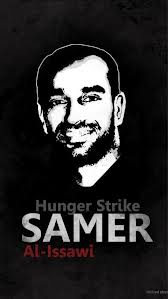 A letter from a ghost

Samer Issawi has sustained his hunger strike for 8 months and counting. Israel is bored.

By Gideon Levy | Apr.11, 2013 | 10:07 AM
A group of exceptional Israeli women started visiting Samer Issawi in Kaplan Hospital in Rehovot a few days ago. They are not being allowed into his room, but they open his door holding out flowers and call out words of encouragement until the guards drive them away.
Issawi has been on a hunger strike for the past eight months. His fate is stirring up the West Bank and boring Israel. He was released as part of theGilad Shalit deal and returned to prison after the Israeli authorities claimed he broke his release terms.
In 2002 he was sentenced to 26 years in prison and now Israel wants to keep him in jail until his death, or the end of his prison term, whichever comes first.
On Tuesday Issawi wrote a letter to the Israelis. It is one of the most bloodcurdling documents I have ever read. From a sense of deep identification and shame, which is no less deep, I wish to use this stage to publish an abbreviated version of it.
"... I've chosen to write to you: intellectuals, academics, writers, lawyers, journalists and activists in civilian Israeli society. I invite you to visit me in hospital and see me, a skeleton cuffed and bound to the bed. Three exhausted prison guards, who eat and drink beside my bed, surround me. The guards follow my suffering and weight loss. From time to time they glance at their watches and ask: How does this body still survive? Israelis, I'm looking for an educated one among you who has passed the stage of the shadows and mirrors game. I want him to look at me as I lose my consciousness. Let him wipe the gunpowder from his pen, the shooting sounds from his mind, and see my face's features etched in his eyes. I will see him and he will see me. I will see how tense he is about the future and he will see me, a ghost clinging to his side and not leaving.
"Perhaps you will be asked to write a romantic story about me. You will testify I was a creature of whom nothing remained but a skeleton, breathing and choking from hunger, losing consciousness now and then. And after your cold silence, my story will be an achievement to add to your resume. When your students will grow up they will believe the Palestinian died of hunger ... Then you can celebrate your cultural, moral supremacy with a death ritual."
"I am Samer al-Issawi, 'one of them Arabs' in your army's terms. That Jerusalemite you locked up for no good reason but that he decided to leave Jerusalem to the city's outskirts. I will be put on trial twice because the IDF and the Shin Bet security service rule your state and all the rest of society hides in a fortress ... to evade the explosion of my suspicious bones.
"I haven't heard a single one of you intervene or try to silence the voice of strengthening death, while you've all turned into grave diggers, military uniform wearers - the judge, the writer, the intellectual, the journalist, the merchant, the academic, the poet. And I cannot believe an entire society has become the wardens of my death and life, defenders of the settlers who persecute my dreams and trees.
"Israelis, I'll die satisfied. I won't be driven off my land and homeland ... you won't enter my spirit that refuses to give in ... maybe now you'll understand that a sense of freedom is stronger than a sense of death. Don't listen to your generals and to the dusty myths. The defeated will not remain defeated and the victor will not remain victorious. History is not measured only in battles, massacres and prisons, but in stretching out a hand in peace, to yourselves and to the other.
"Israelis, I am Samer al-Issawi. Hear my voice, the voice of remaining time - mine and yours. Release yourselves from greedy power hunting. Don't forget those you have incarcerated in prison and camps, between the iron doors that imprison your consciousness. I'm not waiting for a prison guard to free me, I'm waiting for the one who frees you of my memory."
This is the man Israel insists on keeping locked up and is leaving to die. Israel is indifferent and complacent, nobody opens his mouth, nobody protests but a handful of women, one of whom, Dafna Banai, passed this letter to me.

Posted by Human Rights Alert (NGO) at 2:23 AM No comments: