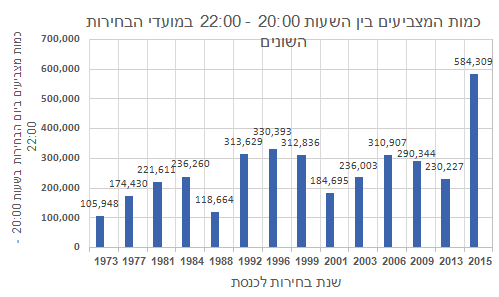 Figure 1: The number of voters in the last 2 hours of polling in successive election year [2]
תמונה 1: מספר המצביעים בשעתיים האחרונות של יום ההצבעה בבחירות בשנים השונות.
____
OccupyTLV, June 12 - a writer, identified only as doodi, has published last night in The Marker (business supplement of the respectable Haaretz daily) the latest in a series of posts, which claim that serious fraud was perpetrated in IT systems of the Central Election Commission in the last Israeli national election (2015) . According to his analysis, the fraud added to Netanyahu's Likud party about 8 mandates . In the 2015 national election, Netanyahu won, according to the official count, thirty ( 30 ) mandates (out of 120 in the Knesset -- Israeli parliament). The next biggest party was the Labor party alliance, with 24 mandates. Therefore, the alleged fraud entirely change d the political landscape in Israel.
According to doodi's analysis, the fraud was perpetrated in the last couple of hours of the polling day, by adding votes of people, who did not exercise their right to vote. [1-2]
The analysis is primarily based on checking the statistics from various sources, regarding the number of voters in individual polling stations.
The writer reports that he had filed complaints with the Israel Police, and that initially he suffered some serious retaliation. However, later he claims that he noticed "very, very serious treatment of the complaint by law enforcement"...
There is room for concern that the doodi is seriously naive...
The immediate questions is: Where is the Shin-Bet in this picture?
The Shin Bet is charged with security of critical State IT systems, like the Secret Service in the US and similar agencies in other nations... There is no doubt that IT system of the Central Election Commission should be deemed a critical State IT system.
However, reports, which have been published in recent years abroad (no Israeli media would accept such publications), subject to academic peer review, document large-scale fraud in critical State IT-systems in Israel over the past 15 years, where the Shin-Bet and the judiciary are the senior partners... These reports suggest that computer fraud at such level amounts to unannounced regime change in Israel... [3-5]
It should also be recalled that reports by senior IT experts in the US, document that US electronic voting machines are vulnerable to fraud, but the US government refuses to address the issue. [6]
Netanyahu has been plagued for years by various corruption scandals, but due to his tight control of law enforcement, he has faced neither true investigation, nor prosecution. The worst of these scandals relates to a murder case during his tenure as Minister of Treasury.[7]
The latest corruption scandal, still unfolding, has been recently exposed in a French court, during the "Sting of the Century" trial of tycoon Arnaut Mimran. Mimran testified in court that he had donated EURO 170,000 to Netanyahu's election campaign. [8] Such undeclared donations are not permitted by Israeli law.
Netanyahu, on his part, claims that he is persecuted by those who failed to beat him in the polls...
LINKS:
[1] Doodi, "Election fraud (2015) - addition to Likud voter fails to match voter percentages, published by the Central Elections Commission"
http://cafe.themarker.com/topic/3317623/
[2] Doodi, "The new Netanyahu scandal - would the sun shine again, in the next week, on the State of Israel?"
http://cafe.themarker.com/topic/3318492/
[3] Zernik, J, . " Fraudulent new IT systems in the Israeli courts: Unannounced regime change?" E uropean C onference on E lectronic G overnment 2015
https://drive.google.com/file/d/0B8Aa2xQGbmk5TTZIQ21NV2NNcEE/view?usp=sharing
[4] Zernik, J., "ISRAEL: Nation hijacked by a Shin-Bet Judiciary Gang" OpEdNews.com
http://www.opednews.com/articles/ISRAEL-Nation-hijacked-by-by-Joseph-Zernik-Corruption_Fraud_Integrity_Judges-131026-653.html
[5] Zernik, J., "IDF 8200 (cyberwar unit) is the best technology school on earth" OpEdNews.com
http://www.opednews.com/articles/IDF-8200-cyberwar-unit--by-Joseph-Zernik-130816-906.html
[6] Could the 2016 Election Be Stolen with Help from Electronic Voting Machines?_ Democracy Now
http://www.democracynow.org/2016/2/23/could_the_2016_election_be_stolen
[7] Israeli Ombudsman refuses to accept whistle-blower complaint against PM Netanyahu - smuggling, murder of a "source"
http://www.opednews.com/articles/Israeli-Ombudsman-refuses-by-Joseph-Zernik-Israel_Judicial-Corruption_Netanyahu_Whistleblowers-141109-518.html
[8] Netanyahu Won't Escape the Mimran Affair So Easily_Haaretz daily
http://www.haaretz.com/israel-news/.premium-1.723726

2016-06-11 US: Democrats unhinged?
======================
Daily Kos, a leading Democrats' blog - on the same page:
a) Endorses Hillary Clinton - the banksters' girl - as the 11th most liberal senator
b) Calls for new Glass-Steagall Act - the banking regulation act the Bill Clinton abolished, leading straight to the crash, from which the US seems unable to recover...

Sign now to stop another financial crisis: Support the 21st century Glass-Steagall Act
In 1999, I was one of just eight senators who stood up and opposed repealing the Glass-Steagall protections that safeguarded families against abusive banking…
DAILYKOS.COM

2016-06-11 ISRAEL: Petition to extradite a man sought for crimes against humanity to Argentina

2016-06-11 ISRAEL: Petition to extradite a man sought for crimes against humanity to Argentina
======================
The man is hiding for Israel for years. The Argentinian gov has been asking for his extradition, on charges that he was involved in running a torture site under the dictatorship.