In August 2017, the Israeli Supreme Court approved the expulsion of black asylum seekers to Rwanda, and recognized the agreement with the Rwandan government. The State claimed that the agreement was “confidential”, and it was filed under seal and reviewed in an ex-parte hearing, excluding the petitioners. Now it is clear that the entire show was a fraud jointly perpetrated by the State Attorney and the Supreme Court, and such agreement never existed at all… 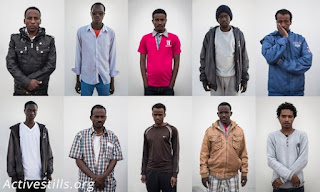 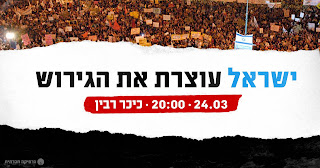 Figure. Poster for a large March 24, Tel-Aviv demonstration against the deportation of asylum seekers. 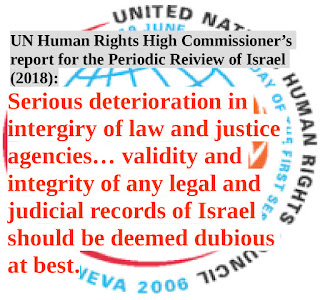 Israel, a nation of about 8.5 millions (official figures exclude Palestinians in the territories, but include Jewish settlers in the territories), is now home to about 50,000 asylum seekers from Africa, the vast majority of whom are from war-torn Sudan or Eritrea. In recent years, the current government has made major efforts to deport them. It has become evident that it would be unthinkable to deport such asylum seekers back to Sudan or Eritrea. Therefore, “third country” solutions were sought by the Israeli government. Most recently, Israel claimed that it had reached agreements with Rwanda and Uganda to absorb deported asylum seekers.
The case provides unique insights into conduct of the Israeli government and the Israeli justice system.
In order to generate the appearance of due process, relative to the detention and deportation of asylum seekers, Israel operates the Detainees Courts. However, already the 2013 High Commissioner of Human Rights report noted, “lack of integrity in the electronic record systems of... the Detainees’ Courts in Israel.” The evidence shows that the courts falsify their own records, document fictitious hearings, which had never taken place in reality. Many of the court files are missing, or hidden with no legal foundation.
Conduct of the Israeli Supreme Court over the past half a year, relative to petitions which sought to stop the deportation, is particularly troubling:
Q: If I understand it correctly, the deportation of the Africans is based on a declaration by the State in the Supreme Court, which claims that an agreement was signed with Rwanda…
A: The Israeli government did not file a declaration, the Israeli government filed the agreement in the Supreme Court. There is reference to the fact that the agreement is confidential… The table of contents of the Judgment says in paragraph 2a: “Agreements for deportation to a third country...” It means that there is no question, whether such agreement exists. The Court, which I highly regard, saw the agreement. So there is an agreement.
...
Q: Have you seen the agreement? You have just stated what is written in it. Have you seen it?
A: I have seen the parts, which are relevant to my job.
Q: Have you seen a signature of a representative the absorbing government on the agreement?
A: Certain things are confidential. Therefore I cannot refer to this matter.
Q: I am only asking about the signature.
A: I know what you are asking, I don’t want to answer…
Q: You are going to execute the agreement. You are considered and honest, conscientious person. You act under the assumption that there is a country, which is ready to absorb them.
A: I know it for certain.
Q: Without seeing the agreement, and without seeing that it is signed?
A: I don’t want to answer this question. Don’t pressure me…
Attorney Mak was a bit vague regarding the nature of the “bluff” and “fundamental contract law” in this matter. One may guess that he referred to the Rules of Evidence, or even to the Statute of Frauds. The Statute of Frauds originates in the English common law, and variations appear in the codes in various jurisdictions. It aims to prevent common types of fraud in the courts. [x] Such laws prescribe that an authentic document be filed to support claims, which are based on a written contract or agreement.
The perpetrators should be deemed the the State Attorney’s office in collusion with justices of the Supreme Court, who accepted the filing of a fake, unsigned agreement under seal, and conducted ex-parte hearings regarding such agreement in the absence of the Petitioners.
The 2018 UN High Commissioner of Human Rights report noted: “… serious deterioration in integrity of law and justice agencies... the validity and integrity of any legal and judicial records of Israel should be deemed dubious at best.”
LINKS
i Israel Can Now Deport African Asylum Seekers Without Their Consent | Haaretz
https://www.haaretz.com/israel-news/israel-can-now-deport-asylum-seekers-without-their-consent-1.5460064
ii Holocaust Survivors Implore Netanyahu: Don’t Send Asylum Seekers on a Journey of Pain, Suffering and Death | Haaretz
https://www.haaretz.com/israel-news/.premium-shoah-survivors-beg-bibi-don-t-send-asylum-seekers-on-death-journey-1.5766089
iii Doctors, Pilots and Rabbis: Opposition Grows to Israel’s Plan to Deport Asylum Seekers | Haaretz
https://www.haaretz.com/israel-news/opposition-grows-to-israel-s-plan-to-deport-african-refugees-1.5763832
iv Rwanda Denies Signing 'Secret Deal With Israel' to Accept Deported Asylum Seekers | Haaretz
https://www.haaretz.com/israel-news/rwanda-denies-signing-secret-deal-with-israel-on-asylum-seekers-1.5752075
v Interview with Prof Shlomo Mor-Yosef | Haaretz
https://www.haaretz.co.il/magazine/tozeret/.premium-1.5803777
vi Asylum seekers started receiving deportation notices: “Congratulations! Israel has reached an agreement...” | Walla
https://news.walla.co.il/item/3132403
vii Sigal Kook Avivi and 118 others v Prime Minister, Foreign Affairs Minister, Interior Minister et al (679/18 and 733/18) in the Supreme Court
viiiIsrael's secret deportation plan faces biggest challenge yet | +972
https://972mag.com/israels-secret-deportation-plan-faces-biggest-challenge-yet/133777/
Editorial: What is the State hiding? | Haaretz
https://www.haaretz.co.il/opinions/editorial-articles/.premium-1.5905589
ix The meaning of the Supreme Court’s injunction against deportation of the refugees | Local Call
https://mekomit.co.il/%D7%92%D7%99%D7%A8%D7%95%D7%A9-%D7%9E%D7%91%D7%A7%D7%A9%D7%99-%D7%94%D7%9E%D7%A7%D7%9C%D7%98-%D7%94%D7%97%D7%9C%D7%98%D7%AA-%D7%91%D7%92%D7%A5/

Posted by Human Rights Alert (NGO) at 7:54 AM No comments: