Richard Fine is a bit stuck on the corruption of the LA Superior Court and California judiciary, and its minute details.  But as he himself has documented, how corruption of the California courts is patronized by the US courts, up to SCOTUS and US DOJ...  Regardless, Richard Fine's place in the annals of this struggle is indisputable.
The key sentence and the take home message is "it may take an earthquake of WE THE PEOPLE".  jz
________________

Robert Greenwald's new documentary sheds light on how far the national security state will go to keep its secrets.

Photo Credit: Shutterstock
The 9/11 attacks on America did not just launch Washington’s war on terrorism; they launched a new White House war on whistleblowers, first under President George W. Bush and then under President Barack Obama, according to a bold new documentary directed by filmmaker Robert Greenwald.
War on Whistleblowers: Free Press and the National Security State traces how two of the most powerful and secretive Washington power centers—the Pentagon’s military-industrial complex and Internet era’s national security state—ran amok after 9/11 and declared war on a handful of whistleblowers who went to the press to expose lies, fraud and abuses that meant life or death for troops and spying on millions of Americans. It explores why Obama, who promised the most transparent administration, became the most secretive president in recent decades and even more vindictive to intelligence-related whistleblowers than George W. Bush.
READ MORE:
http://www.alternet.org/civil-liberties/groundbreaking-war-whistleblowers-investigation-exposes-obama-admins-record?akid=10310.1117888.FQ7TdG&rd=1&src=newsletter822302&t=3
Posted by Human Rights Alert (NGO) at 9:58 PM No comments:

The new leak marks the third of seven underground radioactive water pools that are leaking since Saturday, and follows two failures of the plant's cooling system in a month.
The New York Times reports:

The operator of Japan’s crippled nuclear plant halted an emergency operation Tuesday to pump thousands of gallons of radioactive water from a leaking underground storage pool after workers discovered that a similar pool, to which the water was being transferred, was also leaking.
At least three of seven underground chambers at the site are now seeping radioactive water, leaving the Tokyo Electric Power Company [TEPCO] with few options on where to store the huge amounts of contaminated runoff from the makeshift cooling systems at the Fukushima Daiichi nuclear power plant.

Posted by Human Rights Alert (NGO) at 8:48 PM No comments:

13-04-10 Stanley Fischer for Chairman of the Fed? Fischer, like his student Bernanke, places banks above the law

Fischer placed Israeli banks above Israeli law, and with it is likely to leave after him in Israel a ticking banking crisis bomb.  His disregard for the rule of law is no different than his student Bernanke's.

Tel Aviv, April 10 - recent reports, [1] including comments by Paul Krugman, appeared to seriously consider the possible nomination of Stanley Fischer for Chairman of the Federal Reserve. Current Federal Chair Ben Bernanke, who was a student of Stanley Fischer, leaves his office in 2014.

The idea is misguided, in part for lack of understanding of Fischer's conduct as Bank of Israel's Governor.

The evidence shows that Fischer uncoditionally subjected Israeli banks to US law - FATCA - even before the law was made  enforceable in the United States. [2,3]

With it, Fischer effectively subjected Israeli banks to the notoriously corrupt US banking regulation, undermined the rule of law in Israel and Israeli sovereingty.

Moreover, Fischer did not do so by issuing corresponding banking regulations.  Instead, Fischer permitted and encouraged Israeli banks to fabricate their own FATCA regulations, and enforce them too. [3]

Accordingly, Petition filed with the Israeli Supreme Court - to compel Fischer to perform his duties and enforce Israeli banking regulation, pursuant to Israeli law - claimed that Fischer substituted his newly acquired loyatly to the State of Israeli and its law with loyalty to another nation and its law and/or loyatly to financial institutions and their interests. [4]

The petition was subjected to fraud on the court.  [5]

Corruption of the US courts in banking related matters is central to the current financial crisis in the United States. [6]

Combined, the evidence shows that under Fischer's tenure in Israel, conditions have been established that are condusive to a US style financial crisis.

In short:  Fischer is likely to leave after him in Israel a ticking banking crisis bomb.  Moreover, his conduct in Israeli in this respect is no different than his student Bernanke's approach to banking regulation and the rule of law in the United States, with its disasterous outcome.

LINKS:
[1] 13-04-02 Who will be the next Fed chair? Here are Wonkblog’s odds_Washington Post
http://www.washingtonpost.com/blogs/wonkblog/wp/2013/04/02/who-will-be-the-next-fed-chair-here-are-wonkblogs-odds/
13-02-19 Paul Krugman doesn't think Fischer has edge to be picked to head the U.S. Federal Reserve_Haaretz
http://www.haaretz.com/business/paul-krugman-doesn-t-think-fischer-has-edge-to-be-picked-to-head-the-u-s-federal-reserve.premium-1.504407

Posted by Human Rights Alert (NGO) at 5:35 AM No comments:

13-04-10 Leaders of the Israeli Occupy movement on trial 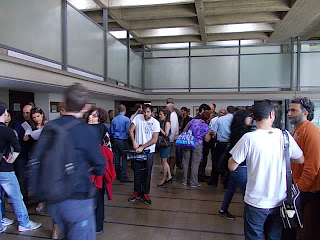 A small crowd waiting for the beginning of the hearing.  Eventually, many were not permitted in the hearing room. 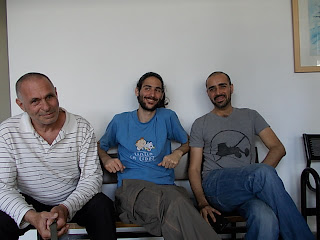 On the right - Yigal Rambam 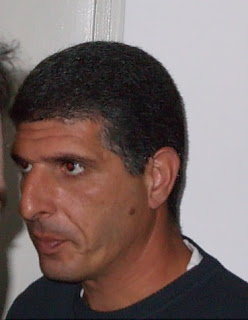 Moshe Cohen - bearing a tatoo "Not nice guys" [Lo Nehmadim - jz] on his arm.  The saying, by former Prime Minister Golda Meir, referring to the social protesters in Israeli in the 1970s has become the slogan of social protest. 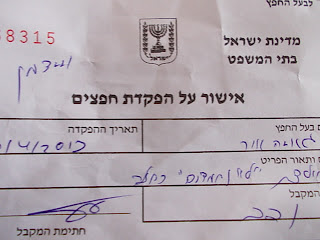 Receipt given to Gaia Or for a t-shirt, saying "Not nice guys", which was confiscated by the Tel Aviv court guards.

10-04-10 Another day in the Tel Aviv court for leaders of the Israeli Occupy movement, among them - Daphni Lif, Moshe Cohen and 7 others. Separately, a hearing was conducted today for another leader of the Israeli Occupy movement - Yigal Rambam.
Unprecedented corruption of the Israeli courts over the past decade, under the tenure of Ahraon Barak and Dorit Beinisch as Chief Justicees of the Supreme Court, is central to socio-economic conditions in Israel today.
Assistant Presiding Judge of the Tel Aviv Court, Varda Alsheikh, was caught falsifying her own court records.  Repeated demands by that Israeli Bar Association that Alsheikh be removed from the bench were diregarded.  She hears many of the largest financial institution default cases in the Tel Aviv court.

Posted by Human Rights Alert (NGO) at 3:30 AM No comments: