[Video] "The people are the sovereign", "corruption is the existential risk", "Bibi go home!" 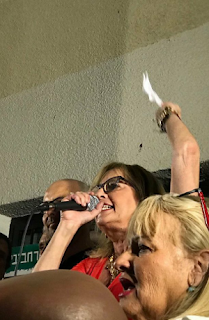 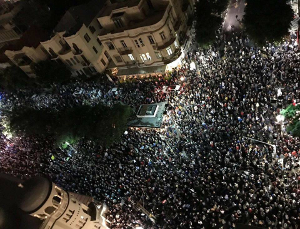 Tel-Aviv, December 02 -- tens of thousands packed Tel-Aviv's Rothschild's Avenue on Saturday night in the largest demonstration so far against government corruption. Sigalit Kesler, standing on the steps of the same house, where the Declaration of Independence was read 70 years ago, called "The people are the sovereign", "corruption is the existential risk", "Bibi go home!", "we are declaring independence from the corruption!"
Other speakers included Prof Uzi Arad, Netanyahu's National Security Adviser and head of the Israeli National Security Council between 2009 and 2011. Arad, who was one of the Netanayhu's closest confidants turned into one of Netanyahu's fiercest critics, basically concurring that corruption is plaguing Netanyahu's government, becoming the highest national security risk, surpassing Iran.
The program included additional speakers and rapper Big Kwame' (an Israeli version). The demonstration concluded with a procession along Rothschild Avenue to the HaBima national theater square. The mood was enraged, loud, and joyful. No violence whatsoever. Large part of the crowd was middle-aged or older"
What triggered the large demonstration was a series of bills by Netanahu's Likud party, trying to shield him from investigation and prosecution. [1] 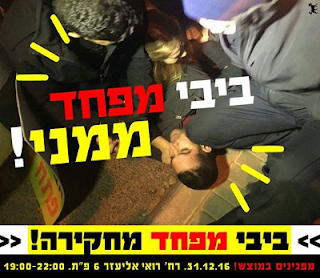 Figure. Social networks poster for the December 31, 2016 Saturday night demonstration in front of Attorney General Avichai Mandelblit's residence: "Bibi is afraid of Meni", showing police violence against Meni Naftali.
______
The current wave of protest was launched just over a year ago in the Petah-Tikva suburb of Tel-Aviv, by Meni Naftali, former chief caretaker of the prime minister's residence, who is the key leader of the demonstrations . 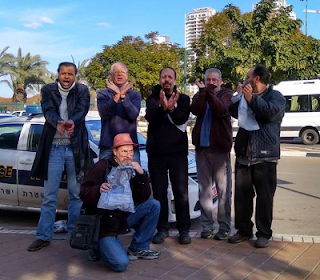 Figure. Outside the courthouse, after release from overnight custody last year, in one of the first anti-corruption demonstrations.
____
Originally, the demonstrations were held every Saturday night by a small group, in front of the residence of Attorney General Avichai Mandelblit, who is perceived as a crony of Netanyahu, shielding him from a series of corruption in investigations. [1]
Some of the investigations involve alleged bribing by tycoon friends, Hollywood producer Arnon Milchan and Australian billionaire James Packer, who between them had an arrangement to supply the prime minister and his wife upon demand costly cigars for the gentleman and pink champagne for the lady. Other investigations pertain to alleged quid pro quo deals with media tycoons, also involving US-based Sheldon Adelson. The most serious investigations, involving a series of close friends and confidants, but purportedly not Netanyahu himself, pertain to bribes in military procurement, including nuclear capable submarines from the German Thyssenkrupp corporation, and privatization of natural gas fields to US-based Noble Energy.
Initially, police responded with violence and court actions against the protests. However, that only led to their growth. Then, a failed attempt was made in a Supreme Court interim injunction, to restrict the number of protesters to 500. Thousands showed up in response.
Tonight's demonstration was the first that was conducted in Tel-Aviv center, the site of the large protest wave of 2011-12. The protesters promise to return to Tel-Aviv next Saturday night.
LINKS:
[ 1 ] 2017-10-16 Netanyahu's Government Pushing Law to Make Investigating a Sitting Prime Minister Illegal | Haaretz
https://www.haaretz.com/israel-news/.premium-1.817451
[2] 2017-05-21 Police Violence, Closed Doors Hearings in Israeli Protest Against Corrupt AG (Videos) | OpEdNews.com
https://www.opednews.com/articles/Police-Violence-Closed-Do-by-Joseph-Zernik-Government-Corruption-170521-770.html
2017-02-04 ISRAEL: [Video] Arrested again for singing in the street | OpEdNews.com
https://www.opednews.com/articles/ISRAEL--Video-Arrested-a-by-Joseph-Zernik-Corruption_Netanyahu-170204-843.html
2017-01-17 ISRAEL: [Video] Arrested for singing in the rain" | OpEdNews.com
https://www.opednews.com/articles/ISRAEL--Video-Arrested-f-by-Joseph-Zernik-Government-Corruption_Netanyahu-170117-282.html
2016-12-25 Police violence on Christmas Eve in Tel-Aviv | OpEdNews.com
https://www.opednews.com/articles/Video-Police-violence-on-by-Joseph-Zernik-Government-Corruption-161225-830.html
Posted by Human Rights Alert (NGO) at 6:06 PM No comments: