IDF Brigadier General Mordechai Kahana suspended, held a container of weapons at home
This week Israeli President Rivlin warned against “winds of revolution”, but the imminent risk of a violent, armed insurgency is posed by religious, right-wing settlers, who are armed to their teeth, and their supporters in the security apparatus in case of withdrawal from Palestinian territories under international pressure... 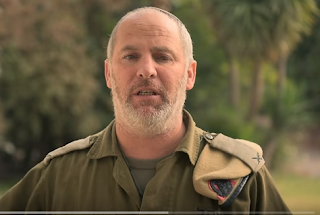 Tel-Aviv, October 28 – Israeli media reported this week that Brigadier General Mordechai Kahana was suspended and is under investigation, related to a container of weapons, which he held at home. [1] The case was initially under a gag-order, a common practice in Israel today...
Mordechai Kahana’s uncle is the late right-wing, radical, violent Rabbi Meir Kahana, and his cousin is the late, right-wing radical Benjamin Kahane. [2]
Comments, published by media, tried to underplay the case, while clearly indicating its broader context: [3]
“The State needs people who not always follow the dry commands”, said Major General (ret) Gershon Hacohen regarding the Brigadier General Mordechai Kahana affair, “without bandits, IDF would never have reached where it is”… This week, investigators from various units were busy with much more serious suspicions in a very sensitive security organization...[under gag-order - jz] Like [former Brigadier General -jz ] Buchris [convicted of sex crimes - jz] and Brigadier General Ofer Winter, who was “accused” of issuing military battle commands of religious nature, Kahana was one of a group of senior IDF commanders, belonging to the National-Religious camp, whose careers face obstacles. Lacking any proportion to the seriousness of the affair, dozens of legal practitioners have filed this week petitions [under seal.. jz] in the Supreme Court, pertaining to search of Kahana’s cellphone and personal computer. The Chief Military Defender summed it up: “The case has caused discomfort among Brigadier General Mordechai Kahana’s IDF defense team… the investigators pose again and again the same questions and focus on petty issues“... “The feeling among the Religious-Zionist camp is that their people at the top are targeted, like Ofer Winter”, Gershon Hacohen brings to the surface a sensitive issue.
The case of IDF brigadier-general Kahana raises some interesting questions:
The question of loyalty of senior IDF and Shin-Bet officers to the law of the State of Israel (there is no constitution), versus loyalty to extreme right-wing, messianic ideology and obedience to rulings by radical Jewish rabbis, is an open, troubling one… It was a key issued in the PM Yitzhak Rabin assassination, and such rabbis have not been prosecuted...
Earlier this week, Israeli President Reuven Rivlin warned in his controversial Knesset opening session speech that "winds of revolution" are sweeping Israel, undermining the democratic regime. [4] Rivlin meant the ongoing attempts to undermine criminal corruption investigations against Netanyahu, including major corruption investigation related to military procurement [under gag order… jz]. [5] Indeed, there is no doubt that the Israeli justice and law enforcement system is suffering a prolonged crisis, undermining the fundamentals of a civil society.
However, the suspects that Rivlin referred to are unlikely to initiate a true revolution. The imminent risk of a violent, armed insurgency is posed by religious, right-wing settlers, who are armed to their teeth, and their supporters in the security apparatus in case of withdrawal from Palestinian territories under international pressure...