Ultra-orthodox Jews in Jerusalem stage annual anti-Arab pogroms on the holiday of Purim with police complicity. Last night it ended with one dead. At the same time, police suppress Israeli Arab protests against police failure to provide equal protection with rubber bullets, stun grenades and tear gas. This is the face of Apartheid and brazen government corruption within the 1967 borders...

Tel-Aviv, March 1 - the celebration of the Jewish holiday of Purim over the weekend this year was supposed to be subdued, due to government mandated Corona lockdown. However, as has been the case all long the epidemic, the ultra-orthodox Jewish communities in Israel have been violating the Corona regulations with impunity. At times, secret agreements between police and the ultra-orthodox communities have been exposed. [i,ii] And at least in one case, ultra-orthodox impunity was openly discussed even during the process of promulgating the regulations. [iii]

Therefore, the tradition of anti-Arab pogroms in Jerusalem's Ultra-orthodox neighborhoods during the Purim holiday took place this year as usual. The locations and timing were well known in advance, but no police was to be seen. Ultra-orthodox Jews blocked traffic and attacked Arab drivers, particularly public transit drivers - buses, vans, taxis.

Last evening, one such Arab, driving a clearly marked hospital transit van was trying to escape his fate and ran over an Ultra-orthodox Jew, who died a couple of hours later. [iv]

Notice the whitewashed reporting by Kann Israeli Broadcasting Service below.

Kann News @8:18 pm, Feb 28, 2021. Meah Shearim incident: According to preliminary reports, transit van driver was attacked by protesters, tried to escape and ran over a 40 year old, who is critically wounded.

Even after such incident, police were nowhere to be seen, and the pogrom was allowed to continue well after midnight. 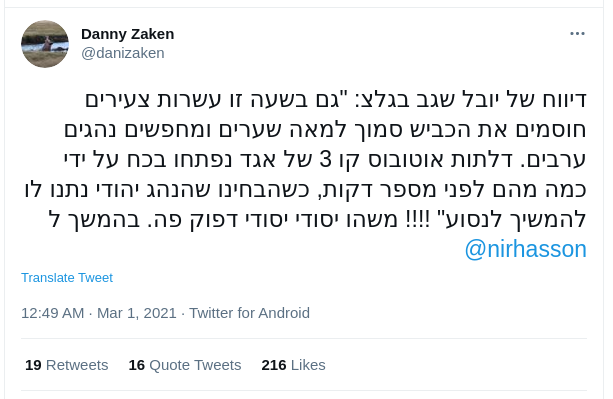 Journalist Danny Zaken @12:49 am, March 01, 2021. IDF radio reports: "Even at this hour, youth are blocking the roads near Meah Shearim [ultra-orthodox neighborhood - jz], searching for Arab drivers. The doors of No 3 bus were forced open by some of them a few minutes ago. When they noticed that the driver was Jewish the let him go"!!! Something very fundamental is fucked up here.

Under the Netanyahu government corruption of the Israel police has reached unprecedented levels. [v] Openly political, selective enforcement has become the routine. Police has violently suppressed weeklyl, peaceful, non-violent Jewish anti-Netanyahu demonstrations. Police violence of yet different proportions is practiced when it comes to peaceful, non-violent demonstrations by Arabs, even this past Friday. [vi]

The weekly Friday demonstrations in various Arab towns and villages are against police failure to provide equal protection against violent crime. Police use rubber bullets, tear gas, water cannons to suppress such demonstrations, even when they are peaceful. This past Friday, police also used violence against an Arab MK (who was supposed to be protected by legislator's immunity) and pointed a gun at the local Mayor.

Public figure, former MK Esawi Frej @5:55 pm, February 27, 2021. Check out this photo closely. A policeman is pointing a gun at Um el-Fahm Mayor, Samir Mouhammid. Imagine what an uproar would have taken place if this had happened in Tel-Aviv, Dimmona, or Bnei Bark [Jewish town - jz]. Only an Arab Mayor is threatened with a gun. Only Arab protesters are shot at with rubber bullets. Instead of fighting crime, police is fighting protesters.

This is the face of Israeli Apartheid and brazen government corruption within the 1967 borders...

In the occupied Palestinian territories anti-Arab pogroms by Kookist orthodox Jews are almost a daily occurrence, with IDF, Shin-Bet and police complicity. [vii] In some notorious cases, they included the murder of Palestinians. [viii,ix]

Absent US patronage, the Biden's presidency expected to be no exception, this travesty would have ended decades ago!

Jews around the world, particularly US Jews, should raise their voices and condemn what is taking place in Israel and in the Palestinian territories by people who claim to represent the Jewish religion!

Journalist Haim Goldberg @2:36 pm, March 1, 2021. Dozens of Arab driven vehicles were attacked last night in Jerusalem. As of this minute, not even a single suspect has been arrested.

iii 2021-01-21 Likkud delays enforcement on the ultra-orthodox, Blue and While delays approval of the lockdown, The Marker [Hebrew]

v 2015-07-19 Suicide of commander Efraim Bracha and "collapse" of the Israel Police, OpEdNews.com

vii 2017-06-22 The Movement That Saw Israeli Settlements as Redemption for Jews and the World, Haaretz

Posted by Human Rights Alert (NGO) at 7:53 AM No comments: