Pinto II:  Growing evidence of perversion of justice by Judge Oded Mudrick
The Pinto scandal is one of the worst corruption scandal in recent years.  Its prosecution in the Tel-Aviv District Court again documents that corruption of the judges is central cause of the situation in Israel today! 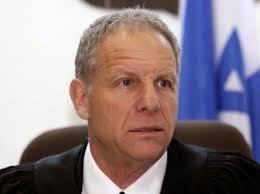 Figure: Rabbi Pinto and senior police officers Arbiv and Bracha - main figures in the scandal. Pinto's attorneys warned that Pinto's prosecution would cause embarrasment to the justice system...  Judge Oded Mudrick of the Tel-Aviv District Court - the evidence shows that he is engaging in perversion of justice to cover up the scandal.
____
OccupyTLV, May 10 - Joseph Zernik, PhD, of Human Rights Alert (NGO) filed in the Tel-Aviv District Court Repeat Request to Inspect the court file in the criminal prosecution of Rabbi Pinto, where the evidence shows perversion of justice by Judge Oded Mudrick. [1]
The new request asks to inspect only the electronic records in this case, in order to avoid "burdening" the court.  Inspection of the electronic records only requires providing access through the terminal in the Office of the Clerk...
The right to inspect court files was declared by the Israeli Supreme Court "a fundamental principle in a democratic regime", and "a constitutional right".  It is also inherent to the fundamental Human Right for fair, public hearing, particularly in criminal proceedings.
However, as documented in ongoing research survey, Israeli judges today deny the right to inspect court records, particularly in criminal prosecutions related to government corruption scandals.
Conditions have been established in the Israeli courts, such that the public is denied the right to access court records which show: what a person was indicted on, was a person was convicted of, what a person's verdict is, and that a person is held in prison pursuant to lawfully made arrest warrants.  Such conditions are typical of tribunals of a military dictatorship, but not of courts of a civil society.
A previous Request to Inspect - a "constitutional" right and a fundamental Human Right - was purportedly denied by Judge Mudrick in a dubious record.
A previous Request for Inspection, which was filed on April 29, 2015, asked to inspect all electronic and paper records in this court file. [2]  However, a letter, dated April 30, 2015, received by mail from the court and purporting to be a decision by Judge Mudrick, denied the Request to Inspect the court file. 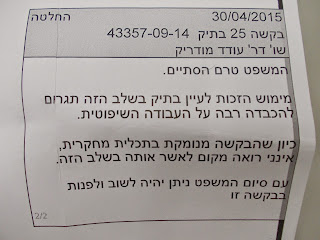 Figure: An unsigned, unauthenticated note, which fails to be registerted in the "Decisions Docket", was received by mail from the Court.  It purports to be a decision denying the right to inspect the court file - according to the Israeli Supreme Court "a fundamental principle of a democratic regime" and "a constitutional right".
The letter says:


The trial is not over yet.
Exercising the right to inspect the court file at this stage would heavily burden the judicial work.
Since the Request is justified by a research purpose, I do not find room to grant it at this stage.
Following completion of the trial, it would be possible to file the request again.

The April 30, 2015 letter was received unsigned, unauthenticated, and it fails to be listed in the "Decisions Docket" of the electronic public access system of the Court (Net-HaMishpat).  Such record  cannot be deemed by a reasonable person a valid court record.
Separately, request was filed today in Court for a signed and authenticated copy of the April 30, 2015 letter by Judge Mudrick.  Previous experience in such situations in the Israeli courts in recent years shows that the chances to obtain a lawfully signed and authenticated copy of the record are null.
Missing conviction record, "did not take place" sentencing hearing...
No response has been received yet from Judge Oded Mudrick on the May 3, 2015 Notice of probably missing/erroneous court file registrations and Request for correction. [3]
The Notice and Request refer to two records in the court file:
a) The April 14, 2015 Verdict (Conviction) record:  Pinto's conviction was widely reported by media.  However, the conviction record is missing from both the “Decisions” and the “Judgments” dockets. Missing court records, particularly judgement records, is typical of corrupt courts. 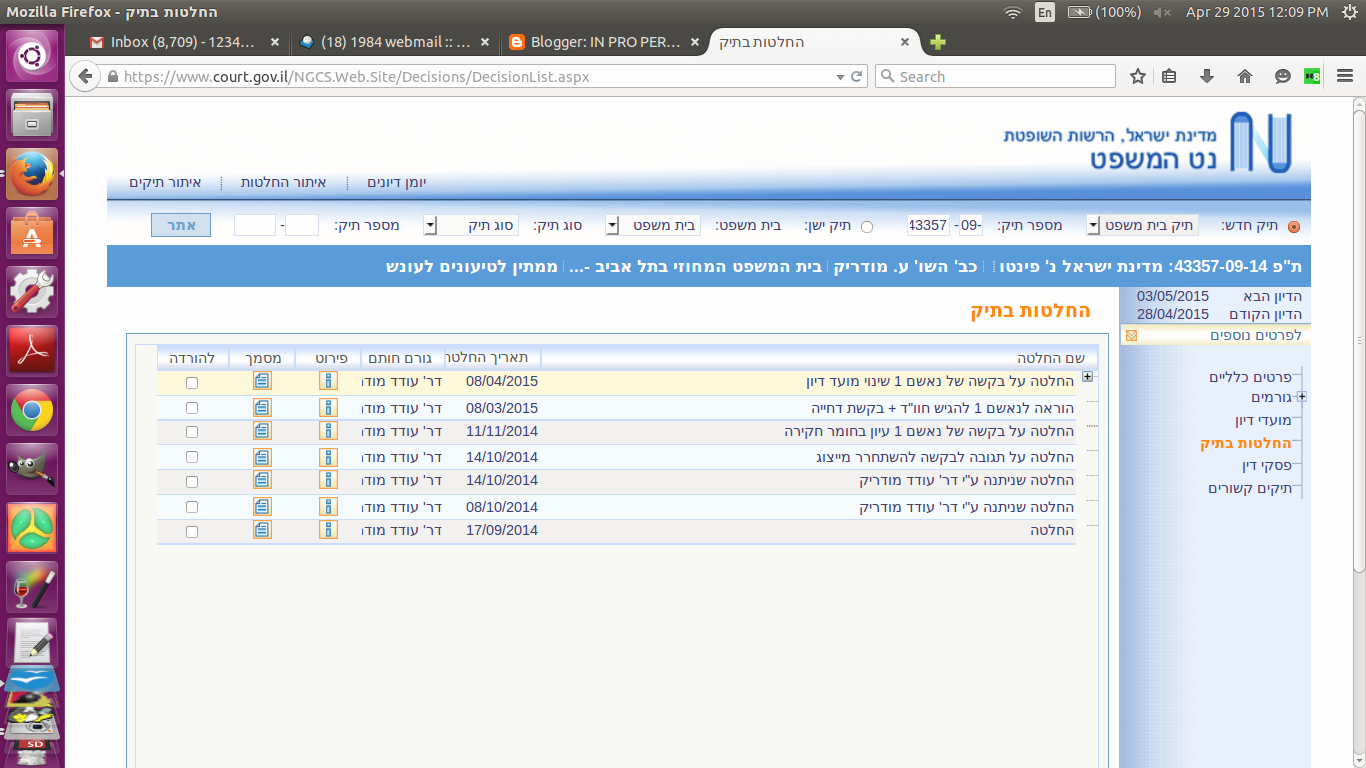 Figure: On April 29, 2015, a total of seven (7) decisions were listed in the case, which by now should hold around 30 decisions. The decision records, which are posted in the public access system, include decisions on postponing hearing dates, changing defense counsel, and Defendant's access to evidence. Missing from the public access system are any hearing protocol, any decision pertaining to the evidence in this case, and any record of the conviction, reported by media to have taken place in a hearing on April 14, 2015. This court file and many others demonstrate that in the courts' new IT system, Net-HaMishpat, judges routinely maintain double-books for case dockets.
____
b) The April 28, 2015 sentencing hearing: The hearing was extensively reported by media.  However, in Net-HaMishpat (IT system of the Court) the hearing is listed, “Did not take place”, in the Court Calendar. The Case Calendar, likewise, shows that the hearing was postponed.
In other cases, it has been documented that Israeli judges conduct “unofficial hearings”, off the record (simulated hearings), while the public and parties are under the impression that they are witnessing a lawful, effectual court hearing. 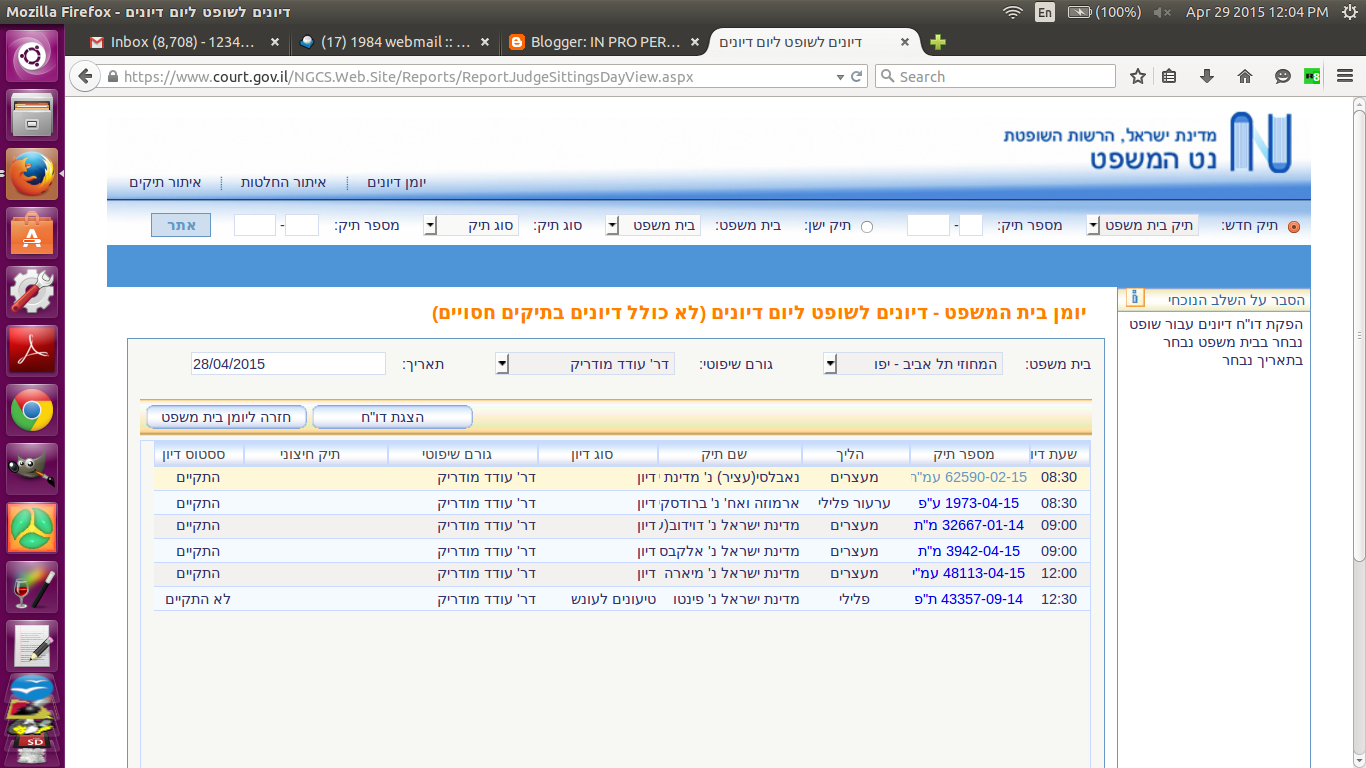 Figure: On April 29, 2015, the Court Calendar showed that the April 28, 2015 sentencing hearing, which was extensively reported by media, "Did not take place". Also in other cases, it has been documented that the Court Calendar in Net-HaMishpat is unreliable, and judges may conduct "unofficial hearings", while the public and parties are under the impression that they are witnessing a lawful, binding court hearing.
_______
The correction, or failure to do so, of the records, relative to conviction and sentencing hearing, would provide clear evidence whether such false data is the result of "human error", or deliberate conduct of the Court.
Judge Mudrick maintains double books for "Decisions Docket" in this case
Beyond the missing conviction record, and the "did not take place" sentencing hearing, it is obvious that Judge Mudrick runs in this case double books for the "Decisions Docket": On April 29, 2015, only seven (7) decision records were listed today in the online public access system, in a case that should by now hold at least a couple dozen decision records.
The records, which are posted in the public access system, include decisions on postponing hearing dates, changing defence counsel, and Defendant's access to evidence. Missing from the public access system are any hearing protocols, and any decisions pertaining to the evidence in this case.
The maintenance of double-books for Decision Dockets is not unique to this court file, but the pattern is particularly blatant in cases that are related to corruption of government agencies.
The Pinto scandal is one of the worst in recent years, documenting deep corruption of the highest levels of the justice and law enforcement systems
Pinto is on trial for attempting to bribe Israel Police Brigadier General Ephraim Bracha, Head of the National Fraud Unit. In his investigation, Pinto provided incriminating evidence regarding Major General Menashe Arviv, Head of Lahav 433, the main investigative unit of the Israel Police, popularly known as the Israeli FBI. Pinto claims that he also holds incriminating evidence against the Israel Police Brigadier General Ephraim Bracha, Head of the National Fraud Unit. It is most likely the worst of the corruption scandals in the Israel police, which have rocked its top command in recent years.
Widespread denial of the right to inspect court files is typical of the Israeli courts today - particularly in cases related to government corruption...
The Request to Inspect the Pinto court file in the Tel-Aviv District Court was filed as part of a study of access to court files in the State of Israel, following major changes in administration of the courts over the past decade.
While the Israeli courts repeatedly declared that public access to court files is a "basic principle of a democratic regime", experience so far indicates that the courts routinely deny public access to court files.  The denial of access and the perversion  of court records are particularly blatant in cases related to corruption of government agencies.
Public access to court records is known for centuries as the fundamental way to safeguard the integrity of the courts, and absent public access to court records it is impossible to maintain the integrity of the courts.
The evidence points to corruption of the judiciary as central to conditions in the State of Israel today.
____ 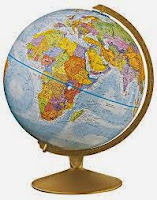