[Video] The remedy for Israeli judicial corruption is repression of social protest
Two activists and two attorneys are detained in relationship to their protest of the unbearable ease with which Israeli authorities take children from their biological parents, particularly the poor. In a bizarre, inexplicable twist, Legal Counsel of Administration of Courts is under house detention...

OccupyTLV, March 16 – detention of three individuals, two activist – Lori Shem Tov and Moti Leybel, and their attorney Zvi Zer, who were first detained on February 27, has been extended for the third time – for another week. Another activist – Moshe Halevy – had been earlier released to house detention. Another attorney – YM – was detained upon returning to Israel. In a bizarre twist, top Legal Counsel of the Administration of Courts – Attorney Barak Laser – was investigated by police for collusion and was placed under 15 day house detention. [i] His investigation was described by media as “shocking” the justice system.

Figures: Lori Shem-Tov, Moshe Halavy, and Moti Leybel
_____
The core protest of the group is against the unbearable ease with which Israeli authorities remove children from their biological parents, particularly the poor, and place them in institutions, surrogacy, or adoption through actions of social workers, attorney, and the courts. The activists describe it as a network of kidnapping and trade in children. The activists claims are supported by the testimony of a retired judge in the Knesset Children’s Rights Committee, by leaked discussion by “senior legal scholars”, describing the family courts “total jungle in the courts”, while media describe the courts in general as a “a circus”. [ii]
In the first court hearing regarding the detention, police claimed in court that the group engaged in “internet terror”, extortion, sexual harassment, and invasion of privacy. However, no details were provided, all investigation material was filed under seal. Attorney for the detainees asked whether “internet terror”, a new term in the Israeli courts, involved trading in weapons. Police clarified that there was no such claim.
Media, however, published in following days numerous reports, repeating police claims of “internet terror”, extortion and intimidation of judges, attorneys and social workers. 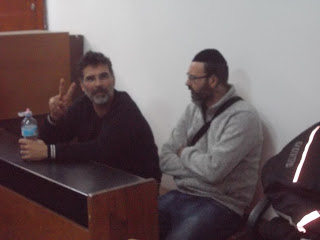 Figure: Moti Leybel in today’s court hearing
_____
In today’s hearing police claimed that they have some 300 “files” against the suspects:
Moti Leybel - his attorneys protested the filing of all investigation materials under seal, while police engaged in selective and biased leaking to media. Regarding media reports of “extortion”, the attorney had police confirm in court that the truncated, out of context recording, which was broadcast by TV, was part of a lawful mediation process. Attorneys for Leybel said in court that police effectively prevented Leybel from contact with his attorneys during the interrogation.  Police had provided the attorneys false information regarding Leybel's whereabouts, or set visitation time for the Attorney in the the Tel-Aviv Detention Center (Abu-Kabir), then told him that Leybel was not there, was in interrogation and not available, etc...  or failed to respond on requests to set visitation times.  Court documents also indicate that Leybel is held in solitary confinement in Yifrah facility (apparently not the usual facility for detention and interrogation). At least during his initial detention period he was also denied the right to go outside for a walk in the jail yard, and his cell lights were on 24/7.  Adjacent to the cell a firing range is in operation 24 hours a day, and Leybel complained about the non-stop noise of the shots.
Leybel's attorneys further claimed in court that a typical “file” involved a blog post, where a female attorney or a social worker was described “screaming like a cat in heat”.
Zvi Zer – according to his attorney’s claims in court, he was not involved in the blogging itself, but in advising the bloggers. The investigation is compounded by protection of attorney-client relationship. Beyond that, Zer’s attorney claims indicated that the issue was related to blogging through a US provider, where multiple users used false identities and false IP addresses. Therefore, police had great difficulty proving, who did what, unless such persons admitted it. Moreover, the chances of mutual incrimination appeared low, since the witness would have had to be present during the writing of the purportedly offending post by another person. The judge tried to deflect such claim by providing an example, where four persons shared an apartment, where illegal drugs were openly stored in the living room. Under such circumstances, the judge said, all four could be deemed suspects. The attorney replied that the analogy was irrelevant. Storage of illegal drugs was a continuous conduct, and therefore the four persons sharing the putative apartment would be in collusion. In contrast, writing a specific blog post was a one time activity, and if any of the suspects found after the fact that an offending post had been written by an unidentified person, he or she could not be deemed a suspect in such conduct. The judge had no answer on this claim…
Lori Shem-Tov – was represented by an attorney, but gave an outstanding performance on some points by herself, although she has no formal legal education. Police tried in passing to extend a search and seizure warrant on one of Lori’s computers. Lori objected, claiming that police was trying to retroactively generate lawfullness for unlawful search and seizure, in order to make such evidence admissible. It turned out that police had seized the specific computer, unlawfully according to Shem-Tov, some 9 months ago, and has been holding it ever since. Lori claimed, and cited from memory court file numbers, where the issue was under review. At the end of this episode, Police appeared as attempting to mislead the court…
Shem-Tov’s attorney claimed that there was no legal foundation for her continued detention – no reasonable risk of perversion, no reasonable risk of endangerment of others, if released to house detention under appropriate restrictions. It then turned out that police filed under seal with the court claims that Shem-Tov planned on leaving Israel under a false identity. Shem-Tov denied that there was any shred of such evidence. She had not left Israel since 1998, and she had minor children in Israel.

https://www.facebook.com/yeledvashem/videos/1839860479597497/
Video: February 19, 2007 open street protest against judicial corruption, which led to the initial detention.
____
In general, according to the suspects’ attorneys’ claims, it appeared that there were two types of suspected conduct in this case:
The suspects’ attorneys claimed that such offenses did not merit any further detention, and that it was not clear at all that police even had sufficient cause for indictment.
Police investigators, who appeared in court, acted nervously. The senior of the two held under his table a strange stress relief device, a 1-2" rope with handles on both sides, and constantly forcefully twisted it with his hands under the table.
In court records, the names of the two police representatives fail to appear ("Unidentified" is entered for "Counsel").  The name of the junior of the two is apparently "Dror Buzaglo". Search in the online Attorneys' Register of the Israel Bar Association for "Dror Buzaglo" returns, "Homepage  - Attorneys' Register - Details of this attorney do not appear in the site edition".  During the hearing, it emerged that even counsel/s for the Suspects do not know the name of the senior of the two, and attempt of Leybel's counsel to discover his name during the hearing failed.
From responses by police representatives on Zer's counsel it also emerged the key evidence was not filed with sealed evidence attached to the request for extension of detention.  Such evidence was not filed and was not marked as such during the hearing either, after being used as evidence in the court. Instead, police representatives came to the bench with a portable, laptop computer ,and showed the judge various computer screens.
Such conduct by police (at times it appeared that the entire operation was more likely Shin-Bet) appeared unusual, in view of the fact that such representatives admitted in court that the investigation lasted many months, and special resources were allocated to this matter, including a number of investigators and a group of prosecution attorneys.
The small courtroom was packed, mostly by supporters of the suspects, including mothers, who had been assisted by the suspects in their fight to prevent taking of their children, or regaining custody. Some of the supporters interrupted the court by making loud statements in support of the suspects, and were removed from the courtroom.
The judge’s final decisions on the three suspects noted that they “threatened the rule of law”. It appears that the various recent protests against corruption of the justice system is deeply unnerving the authorities. Accordingly, police and the courts are employing unprecedented repressive measures against such protest, often resorting to methods that contravene the rule of law… [iii] The detention of attorneys in this case is highly unusual, and more so the investigation and house detention of the Legal Counsel for the Administration of Courts.
The referral to social protest by Israeli authorities as “terror” appears as adoption of US government approach and repression methods. [iv] Likewise, the severe retaliation against individuals, who publish truthful, derogatory information regarding judges. Notable, but divergent examples from the US include former US prosecutor Richard Fine, who protested the taking by California judges of “unpermitted payments” (called by media “bribes”), and was unlawfully held in solitary confinement for 18 months by now convicted LA County Sheriff Lee Baca. [v] and blogger Roger Shuler, who published derogatory information regarding politicians and sexually explicit photographs of a conservative US judge from a gay porn site, and was beaten and unlawfully held by the Shelby County, Alabama, Sheriff’s Department. [vi]
Both in Israel and in the US, corruption of the justice system generates protest, which breeds repressive measures. Often the repression provides the best direct evidence of corruption of the justice system.

vi 2014-01-06 “Prayer for the peace and welfare of US anti judicial corruption activists ROGER SHULER and BILL WINDSOR”, OpEdNews.com
https://www.opednews.com/populum/page.php?f=Prayer-for-the-peace-and-w-by-Joseph-Zernik-Bill-Of-Rights_Corruption_Corruption-In-Legal-Profession_Judges-140106-955.html
2014-01-13 “Alabama Blogger May Be The Only Person Jailed For Journalism In The Western Hemisphere”, Business Insider
http://www.businessinsider.com/roger-shuler-legal-schnauzer-troubles-2014-1
Posted by Human Rights Alert (NGO) at 10:36 AM No comments: