09-10-23 It was/is as simple as this- Richard Fine was/is the victim of alleged racketeering by the LA-JR... 09-10-23 ALLEGED RACKETEERING WAS THE DIRECT CAUSE OF RICHARD FINES FALSE JAILING - IMMEDIATE RESIGNATION OF THE PRESIDING JUDGE AND THE CLERK IS DEMANDED.
.
Marina v LA County(BS109420):Orders, Judgments, Writ Applications were all False on Their Faces... With date mismatches and defects in POS, which were the fingerprints of the LA-JR (Alleged LA Judiciary Racket)... In a case where LA County was named Defendant and two large privately held construction companies - Real Parties in Interest... Clerk JOHN CLARKE and Presiding Judge CHARLES MCCOY Continue to deny access to public records... Regardless, sufficient evidence was available to conclude that Marina v LA County was an ET (Enterprise Track) case of the LA-JR.

CHARLES MCCOY: Your immediate resignation from your position as Presiding Judge is demanded for alleged complicity with racketeering, among others - by members of your former law-firm - SHPPARD MULLIN.

JOHN A CLARKE:Your immediateresignation from your position as Clerk is demanded for alleged central role in the LA-JR.

Evidence of racketeering activity by judges of the Los Angeles Superior Court was nothing new…The news here was in the statistical strength of suchseries ofeight consecutive executable orders, judgments and writs… Alleged repetitive obstruction/perversion/corruption of justice in such a long series, generated evidence that was far beyond anyreasonable doubt… IN SHORT- LIKELY TO BE SUFFICIENT FOR CRIMINAL CONVICTIONS…

Each and every one of the eightexecutable orders and judgments in thepast 2 years was False on Its Face with the dates/signatures and Proof of Service defects that were the LA-JR fingerprints...

All were issued by Judge DAVIDYAFFEwith Atty in JOSHUA ROSEN; All required collusion by Clerk-DeputyCONNIE HUDSON and Clerk of the Court - JOHN CLARKE; All were beneficial to large private buildersDEL REY JOINT VENTURES & NORTH, And all intentionally harmedRICHARD FINE...

Such investigation must include also the conduct of Att KEVIN MCCORMICK, Judge DAVID YAFFE, and PresidingJudge CHARLES MCCOY, relative to the filings of false and deliberately misleading papers in theHabeas Corpus petition. Regardless of being reliably informed, none of theminitiated any corrective actions that we know of!

Immediate comprehensive investigation of such alleged criminality must bedemanded by all who live in LA County,California!

Presiding Judge of the Court – CHARLES MCCOY – was reliablyinformed, but refused to initiate corrective action. In view of the ongoingfalse jailing of RICHARD FINE, such conduct by thePresiding Judge must be deemed misprision ofcriminality…

CHARLES MCCOY's immediate resignation from his position as Presiding Judge is demanded for alleged complicity with racketeering, among others - by members of his former law-firm - SHPPARD MULLIN !

JOHN A CLARKE's immediateresignation from his position as Clerk is demanded. He is alleged as one of the central figures of the LA-JR. 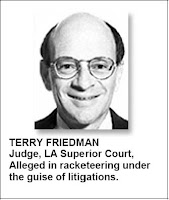