12-12-09 Hannukah message from command and control

12-12-09 Hannukah message from command and control


The Death of Jordan Davis: Is it Open season on Negroes?

by Doshon Farad
Another unarmed 17 year-old Black male shot dead by a Florida white man. Are white men really so terrified by the presence of Black males, or " is black life, specifically that of black males, seen as valueless?" Or both?
Reprinted from the Black Agenda Report
The Death of Jordan Davis: Is it Open season on Negroes?
by Doshon Farad

READ MORE:
http://www.opednews.com/articles/The-Death-of-Jordan-Davis-by-Doshon-Farad-121206-482.html
Posted by Human Rights Alert (NGO) at 6:32 AM No comments:


N.C. prisoners tortured with hot sauce on their genitals

A North Carolina prison warden has been suspended while an investigation is underway into allegations by inmates of elaborate acts of torture.
Six inmates from the Sampson Correctional Institution sent a hand-written letter to a U.S. District Court in July reporting that guards had made them perform painful and abusive acts. The men said they were told to ingest large spoonfuls of “exotic hot sauce” and to “pull their pants down so the officers can watch them rub hot sauce on their rectums and testicles which [left] them blistered and raw for days.” The prisoners would complete the cruel tasks in return for work assignments that paid just 70 cents as well as food, alcohol and cigarettes.
Other allegations include that the men were forced to strip and simulate sex with each other. They also report being made to grab and kiss wild snakes while working on a road crew and throw captured bunnies in to oncoming traffic.
“In their letter, the inmates ask for the court’s assistance in finding lawyers to help them file a lawsuit against the state and said they feared retaliation from the prison staff,” reported the AP, noting that prior to the letter the prison system had been alerted to some of these abuses through internal grievances filed by inmates.
Close
Natasha Lennard is an assistant news editor at Salon, covering non-electoral politics, general news and rabble-rousing. Follow her on Twitter @natashalennard, email nlennard@salon.com.
Posted by Human Rights Alert (NGO) at 6:21 AM No comments:

AP/Mark Lennihan
Please don't tell me that these reports in the business press touting Sallie Krawcheck as a front-runner for chairman of the SEC or even a possible candidate to be the next Treasury secretary are true. Who is she? Oh, just another former Citigroup CFO, and therefore a prime participant in the great banking hustle that has savaged the world's economy. Krawcheck was paid $11 million in 2005 while her bank contributed to the toxic mortgage crisis that would cost millions their jobs and homes.
Not that you would know that sordid history from reading the recent glowing references to Krawcheck in the New York Times, the Wall Street Journal and Bloomberg News that stress her pioneering role as a leading female banker -- a working mother no less -- but manage to avoid her role in a bank that led the way in destroying the lives of so many women, men and their children. Nor did her financial finagling end with Citigroup, as Krawcheck added a troubling stint in the leadership at Merrill Lynch and Bank of America to her resume.
READ MORE:
http://www.opednews.com/articles/A-Sign-That-Obama-Will-Rep-by-Robert-Scheer-121207-363.html
Posted by Human Rights Alert (NGO) at 5:53 AM No comments: 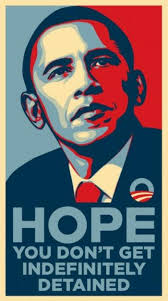 LANSING, Mich. (Dec. 5, 2012) -- Supported by a broad coalition of activists, the Michigan House of Representatives unanimously voted 107-0, in favor of House bill 5768 (HB5768) today. It was introduced by IRepresentative Tom McMillin.

opednews.com
Cross-posted from The Guardian

While US government lawyers persist in defending the menacing Section 1021 in court, a Senate initiative makes matters worse

Democratic Senator Dianne Feinstein with the press after an intelligence committee hearing on the Benghazi attack, 16 November, in Washington, DC. Her amendment to the NDAA has received far less media scrutiny. Photograph: Alex Wong/Getty Images

READ MORE:
http://www.opednews.com/articles/Feinstein-amendment-double-by-Naomi-Wolf-121206-694.html
Posted by Human Rights Alert (NGO) at 5:50 AM No comments:

Corporate power keeps growing beyond the world of Citizens United.