Freedom of Assembly in public spaces is quintessential for the formation and maintenance of Civil Society.  Barcelona leads the list, with Jerusalem and Los Angeles, in that order, very distant second and third. 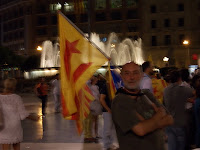 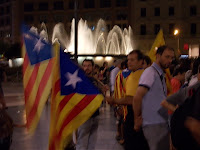 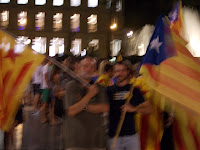 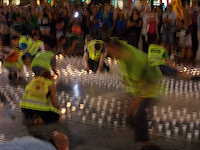 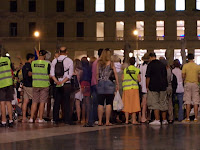 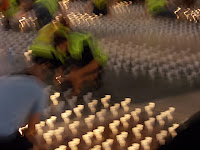 Catalonian National Day demonstration. The blue/red stars on the flags represent the right/left wings of the Catalonian Independence movement.They appeared in harmony in the demonstration. 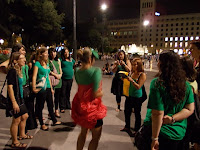 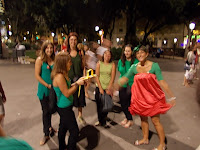 At the same time that the demonstration was taking place in Placa de Catalunya, a bachelorette party was filming a video in a corner of the giant square, where the bride to be was dressed as a ripe tomato. 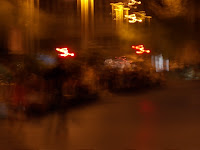 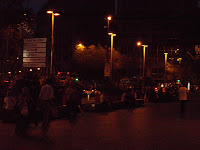 Hanging out in Placa de la Universitat at night.

Barcelona:
The public spaces are full of People after dark and at night, when it cools down outdoors, and before it cools down indoors. Air-conditioning is expensive, and largely avoided. The summer dress code is accordily airy or even skimpy...
People, young and old, sit (mostly in Placa de Catalunya) on the square floor, on benches, stand talking.  Youth in particular hang out in the squares and nearby streets, sometimes in groups of a dozen or two, since bars and clubs are too expensive. Freedom of Public Assembly in public spaces is quintessential for Civil Society and formative at youth.
Any evidence of undercover police and affiliates presence, surveillance, or provocation is yet to be discovered.  One of my local network of undercover informers promised to provide me a media report evidencing undercover police activity in Barcelona.  I am waiting for the email with the links.
People drink in public in the squares, mostly beer, and marijuana is sold semi-openly.
Any case of violence is yet to be recorded by this observer in any public space, day or night, in Barcelona.
September 8 - Demonstration for independence on Catalonia National Day
On Saturday night (the real National Day is on September 11), a large crowd of People assembled in Placa de Catalonia, to demonstrate for independence of Catalonia, now an Autonomous Zone, from Spain and to celebrate the Catalonian  National Day.
An estimate of 1,000-2,000 People assembled for the demonstration, where a giant flag of Catalonia was created from candles in plastic cups, which were lit by volunteers on the floor of the square.  People were dressed or waved Catalonian flags.  The are two variant of the Catalonian flag, with red or blue star, reflecting the left and right wing of the independence movement, respectively.  However, they seemed in perfect harmony in the demonstration.  Pro independence slogans were chanted, national songs were sung.
The People in the fluorescent jackets in the pictures are not police, but the organizers of the demonstration.  No uniformed police presence was seen at all.  I asked one of the organizers if he thought that the demonstration was infiltrated by undercover police. He said it was possible.  But there was no evidence, such as typically seen in other places, of videotaping of organizers by the plain clothed types, except for legitimate TV crews, who were welcomed by the demonstrators.
As is the case in Quebec, it appears that the current financial crisis/swindle will intensify the call for independence.
Jerusalem:
In Jerusalem,  a Palestinian demonstration for independent Palestine, waving flags and singing national songs is inconceivable.
The main public space in the center of the new city is Zion Square.  Youth hang out there, particularly on weekend nights.
Irrational drug policy prohibits pot in Jerusalem, compared to Tel Aviv, where the same is more relaxed.  Undercover police and affiliates in Jerusalem were shown to be involved in the distribution of drugs, and in Israel a senior combat officer was recently prosecuted for controlling drug imports from Gaza into Israel.  Criminology experts agree - the highest social cost of failed drug policies is the thorough corruption of law enforcement.
The same irrational policies favor the drinking of vodka over beer.  The outcome, combined with constant present of undercover police and affiliates, engaged in surveillance and provocations, is routine violence, mainly Jews on Arabs.
Undercover police infiltration of demonstrations is routine.  In one extreme in Tel Aviv a few weeks ago, a social protest demonstration was infiltrated by police dressed in t-shirts of a particular reform party, and eventually provoked violence by the true demonstrations.

Los Angeles:
Happen to be in the wrong street in the wrong time, even during the day? You may be brutalized or killed by police.  The LADP continues a tradition of terrorizing the citizenry.

The Occupy social protest movement has been infiltrated by undercover police and affiliates from the start.  That case, referring specifically to conditions in Los Angeles, was noted by a prominent US constitutional scholar as a serious violation of the First Amendment.
I would like to believe that Americans from the Tea Partiers to the Occupiers, disdain criminality of government, and support the rule of law and the People's sovereignty.  However, in contrast with the Catalonian Independence movement, Americans feel the need to indulge in their sectarian differences, to the point that it is unclear reestablishing the rule of law and sovereignty of the People is any longer possible.
The main historic public space in downtown Los Angeles is MacArthur Park. In May 2007, armed LAPD stormed and brutalized peaceful protestors, picnickers, and TV crews.  In creativity that puts to shame Hollywood copywriters, the LAPD calls the case the MacArthur Park Melee (investigative committee was forms, civil, but no criminal cases in the courts - business as usual)
Public spaces downtown are mostly deserted after dark.  The flight to the suburbs eliminated public life in the downtown areas of many cities.  In many of the suburbs no real public spaces were designed or felt necessary. Youth often assemble in schools, religious groups, malls, all subject to various stipulations of the owners.  But none of these are of the nature of public assembly in a true public space.  This process may be reversed now, given the cost of gasoline and falling economic ability of the People.

Posted by Human Rights Alert (NGO) at 3:04 PM No comments: