[Videos] Collapse of the Israeli regime - dancing in Jerusalem
"This is a regime change in real time."
Read more: https://inproperinla.blogspot.com/2020/03/blog-post.html
Jerusalem, March 25 - the crisis, which has been brewing for several years, is now boiling over, thanks to the Corona crisis. [1]
Interim Knesset Chair Yuli Edelstein resigned today, refusing to permit holding a seating of the Knesset to elect the permanent new Chair, defying a Supreme Court edict. 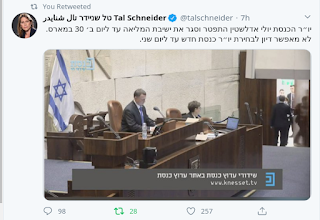 Reporter Tal Schneider: "Knesset Chair Edelstein resigned and adjourned the Knesset until Monday, March 30, would not permit election of a new Chair".
https://twitter.com/talschneider/status/1242739547995344897
Edelstein's attempt to lock up the Knesset failed, when MKs of the newly elected narrow majority refused to leave the Knesset. [2] MKs remaining locked inside, with Knesset Guard and Israel Police outside, hundreds of law abiding, non-violent, unarmed demonstrators are partying their protest outside the main gate.
https://www.youtube.com/watch?v=Ob4kGQNOOwc
https://www.youtube.com/watch?v=PawpiWeDjuo
https://www.youtube.com/watch?v=Afe_HJoOTwI
Hundreds of other protesters are holding up in front of the Supreme Court, where a hearing is conducted this evening in a contempt process against Edelstein.
The main demands of the protesters is convening the Knesset today, voting a new a permanent Chair into office, and then voting on a bill to prohibit a Defendant in criminal prosecution on corruption charges from being appointed the new prime minister...
In the meanwhile, the Interim Netanyahu government again issued this afternoon emergency regulations, bypassing Knesset approval, further restricting movement, and giving the "Mossad-War Room" and Shin-Bet wide ranging "Top Secret" authorities, in a purported effort to combat the epidemic... 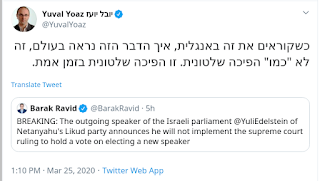 Attorney Yoval Yoaz, commenting on Journalist Barak Ravid's English, post wrote: "When you read it in English, you realize this is not "like" a regime change. This is a regime change in real time."
https://twitter.com/YuvalYoaz/status/1242770836492300288
You my call it "collapse of the regime", "constitutional crisis" (in a nation with no constitution), "social disintegration", or "loss of social contract". Regardless of the academic designation, it it obvious that the regime has entered a period of catastrophic instability.
A main concern is the potential eruption of violence, given the large number of armed civilians, mostly settlers. The publication of the long forgotten Trump's "Deal of the Century" prior to the latest (3rd within a year), early March general election led them to believe that major parts of the Palestinian territories would have been annexed by now. It should be considered a serious intervention in internal Israeli affairs. With the passage of time, it would probably be judged that together with the conduct of Adviser Jared Kushner, Middle East Envoy Greenblatt , and Ambassador David Friedman it affected destabilization of the Israeli political system and the lawful regime.
LINKS
[1] "Not every regime succumbs to Corona, but Israel's is in the high-risk group"
https://www.opednews.com/articles/Not-every-regime-succumbs-by-Joseph-Zernik-Corona-Virus-Coronavirus-Covid-19-200320-948.html
[2] Knesset Speaker Resigns, Subverts High Court Ruling to Hold Vote on His Replacement
https://www.haaretz.com/israel-news/.premium-knesset-speaker-resigns-high-court-s-ruling-undercuts-foundations-of-democracy-1.8708565

Posted by Human Rights Alert (NGO) at 9:40 AM No comments: