09-10-09 Upon a second look, I realized that Bobby Harmon was most likely seriously abused...

It's deja vu all over again... but this time coming from the U.S. Court of Appeals, 9th Circuit...
At 12:48 PM 10/9/2009, Bobby Harmon wrote:
Bobby Harmon
Hi Mr Harmon:
.
It me again - the non-lawyer with interest in criminality in operation of large systems in government
and public corporations.
I notice that the case is closed, and since you listed as cc: some from USDOJ, OIG, I hope that you do
not mind that I made this note in public.
.
I often find that PACER & CM/ECF are employed in an abusive manner against pro se litigants, and
even more so against prisoners and habeas corpus petitioners. I must say that there is something
sleazy about it (and sorry for the non-legal terminology).
.
1) Were these people, who are at the bottom of the pecking order indeed such a danger to the justice
system that there was a need to devise new dishonest methods to beat them down?
.
2) Looking at Mr Harmon's docket, all records earlier than Dkt #27 were removed from public view. I
am yet to see a U.S. District Court that set up Rules of Court on this issue. There was never
permission to clerks to remove records for no reason from the paper Civil Docket. So where did
judges and clerks get this notion that they are at liberty to eliminate anything they li
ke to, anytime they
like to, from the PACER docket?
.
Whenever I see a docket of this kind it appears as a large red sign - someone was dishonest here....
.
3) The first record that appears in the docket is DKt #27, A USCA 9th Judgment:
.
a) I consider the docketing of this record by the clerk EMT as offensive, possibly conduct of criminal
nature for a clerk - to docket an invalid judgment.
.
Where did the courts get the notion that they were allowed to docket judgments that were not signed,
that had no name of a judge appear on them, and no authentication either?
.
Mr Harmon:
.
I am no attorney, but I do have substantial experience in reviewing methods that the courts deceive
litigants in electronic filing and docketing/ If what I wrote above, sounded to you like Greek, than
probably they did a job on you all the way. If you are interes
ted, please email to me, and I would
analyze the docket integrity line by line. You may be able to make good use of it - seek relief from
judgments and orders that were procured through fraud.....
.
I would like to emphasize again, that even now, that I have looked at the
docket and the judgment, I
have no clue regarding the legal issues,.. I am not a lawyer... but I can see a dishonest docket, and
since I am NOT a lawyer, I have no problem saying so.
.
Joseph Zernik.
.
P.S. I am also disturbed by the USCA 9th: Honorable Alex Kozinski. He is advertised as a brilliant
jurist, and the champion of Civil Rights. How could such paper come out of that court? It is abusive
of civil rights in and of itself....
Dkt#27 - the judgment from U.S. Court of Appeals, 9th Circuit, can be viewed:
http://inproperinla.com/09-10-09-bobby-harmon-usca-9th-judgment-dkt%2327-unsigned-no-names-of-judge-no-autentication.pdf 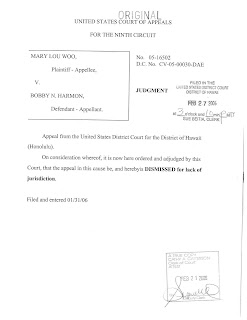 Date: Fri, 09 Oct 2009 13:32:09 -0700
To: Bobby Harmon
From: joseph zernik
Subject: Re: Fwd: CV05-00030 - U.S. DEPT OF LABOR vs HARMON - WITNESS: SIBEL
EDMONDS
Hi Mr Harmon:
My standard disclaimer: I am not an attorney, not even by a long shot. What I write must not be
deemed legal analysis.
.
My main interest is in exploring the various new abusive methods implemented in PACER & CM/ECF.
In that respect some district court appear to manipulate cases through case number designations.
.
I wondered if you noticed that your case was related by number to a group of cases:
Are any of these cases related to your case in any way shape or form?
My observation was that civil cases that were associated in this manner with criminal cases had higher
odds of being abused.
Joe Zernik
At 12:48 PM 10/9/2009, Bobby Harmon wrote:
---------- Forwarded message ----------
From: Bobby Harmon
Date: Fri, Oct 9, 2009 at 2:44 PM
Subject: CV05-00030 - U.S. DEPT OF LABOR vs HARMON -
WITNESS: SIBEL EDMONDS
To: President Barack Obama
Attorney General Eric Holder"
Farmer
Posted by Human Rights Alert (NGO) at 10:59 AM No comments: