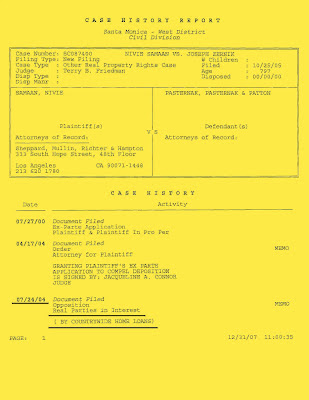 NOTICE OF SUGGESTION
DESIGNATE COUNTRYWIDE* AS JUDGE IN SAMAAN V ZERNIK
Countrywide here designates CFC, Inc and/or any and all of its subsidiaries and affiliates jointly and/or severally

TO ALL PARTIES AND TO THEIR ATTORNEYS OF RECORD,
Please also take notice of the following suggested stipulation:

WHEREAS, Sustain Case History pages #1, 194, 195, 196 include the following designations for Countrywide:

WHEREAS, on Sept 10, 2007 Judge Jacqueline Connor was disqualified pursuant to filing per CCP §170.3, with claims largely hinging upon obstruction of justice to benefit Countrywide;

WHEREAS, since Sept 10, 2007, through case transfers among a number of judges, Defendant and Cross-Complainant has never been noticed of any Order by Supervising Judge of Re-assignment of the case;

WHEREAS, no Re-Assignment Order dated later than Sept 10, 2007 is to be found on file;

NOW THEREFORE, Defendant and Cross-Complainant Zernik is respectfully submitting that the following suggestion at least be contemplated:

Sustain Audit data still missing, out of compliance with the law!


COMMENT:
The note on page 1, designating Countrywide as "Real Parties of Interest" and dated "7/24/04", was in fact entered into the system on 7/24/07 by Department "I" of LA Superior Court, where Judge Connor is Presiding Judge.
In and of itself this note shows:
a) That Sustain, the Court's Official Case Management System is unsafe and unreliable.
b) That the Court held the know-how for posting retroactively dated, invalid data in Sustain, which should never have been allowed in such a system in the first place, if properly built and managed.
c) That the Court in fact engaged in posting retroactively dated, invalid data in Sustain in Samaan v Zernik
Posted by Human Rights Alert (NGO) at 5:33 PM No comments: