2019-04-09 Israeli election: no wall of separation between corrupt state and corrupt religion

Israeli election: no wall of separation between corrupt state and corrupt religion

Election fog is not cleared yet, but the emerging deal between Netanyahu, facing corruption indictments, and messianic right-wing Jews, bolstered by Trump, is "Annexation for Immunity".
Read more: https://inproperinla.blogspot.com/2019/04/2019-04-09-israeli-election-no-wall-of.html 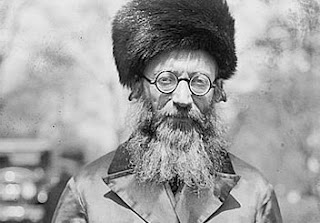 The specter of Rabbi Abraham Isaac Kook (1865 1935) and his teaching is haunting the State of Israel" A mystical messianic message, which over the past half century has evolved into the religious permit for the settlements in Palestine and murderous zealotry.

---
Tel-Aviv, April 09, the outcome of today's general election remains unclear tonight. Both major parties have declared victory" [i] The outcome may take another 24-48 hours to be ascertained, since about 6-7% of the votes (soldiers, etc) , who vote out of precinct, take longer to verity and count.
However, religious Right-Wing Alliance leader, MK Bezalel Smotrich, a fundamentalist orthodox Jew has not wasted time, and has announced that he plans on going ahead with "amending the immunity act", in order to stabilize the new government, to be headed by Netanyahu... 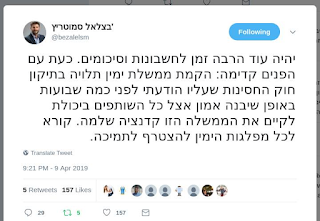 April 09, 2019, election day, 9:21 PM, Twitter message by MK Bezalel Smotrich, stating, "...looking forward: Establishing a right wing government depends on amending the immunity act, which I have announced a few weeks ago..."
---
" Amending" the immunity act means passing a new law that would prevent the indictment of Netanyahu while in office. That, when the Attorney General had already announced over a month ago his decision to file three separate indictments in separate corruption affairs, [ii] and new corruption investigations are pending. [iii]
Media refer to the deal as "Annexation for Immunity". [iv] It includes an explicit quid pro quo - exerting Israeli sovereignty over the Palestinian territories in the West Bank - the wish of extreme right-wing Jewish settlers - in exchange for immunity for Netanyahu in his multiple corruption cases.
In 2005, Smotrich himself was detained for a few weeks in relationship to actions against Israeli withdrawal from Gaza. No indictment was filed. Later, in 2015 and 2019 senior Shin-Bet officers claimed that Smotrich had been detained in possession of 700 liters of gasoline, apparently in preparation for a major terror act.  Smotrich denied the claims.
The election was advanced and timed to undermine the scheduled filing of the indictments against Netanyahu. The cooperative Attorney General, Avichai Mandelblit (former Netanyahu Cabinet Secretary), went along and postponed the criminal process in order "not to interfere" with the political process of general election.
Netanyahu, who was described as "fighting for his life", or more accurately, for staying out of prison, has advanced the idea of annexation of the Palestinian territories just days prior to the election, in view of tight election polls, predicting a loss to his rivals.
The annexation of the Palestinian territories is viewed by many as the final blow to any semblance of civilized regime in Israel. The current reality is already viewed by many as an elaborate apartheid regime, both legally and in everyday practice. However, it has been managed over the past half-century under the ruse of being "temporary" - pending peace negotiations with the Palestinians. Annexation would end such pretensions.
The Right Wing Alliance, which is Netanyahu's Likud party's partner in such quid pro quo, is the handiwork of Netanyahu as well. It was formed under Netanyahu chaperonage, just prior to the election. It includes some explicit Jewish racist elements - followers of the late Rabbi Meir Kahane, whose Jewish Defense League had been declared by FBI in 2001 "a right wing terrorist group". [v] Netanyahu was widely criticized for such initiative, but it was critical for his survival. [vi]
The annexation initiative has moved to high gear just days prior to the election, following Trump's declaration, recognizing Israeli sovereignty over the Golan heights. [vii] Like the subsequent declaration of the Iranian Revolutionary Guards as "terror group", such US declarations have been assessed by many as lacking real significance, dubiously serving US interests, and mostly reflecting Trump's interference in the Israeli election process in an effort to assist Netanyahu in his desperate election campaign. However, such declarations by Trump led Netanyahu and his supporters to the conclusion that they are likely to be able to generate US support for the annexation of the Palestinian territories as well.
The religious ideology, which is driving the Right Wing Alliance is claimed to be the teaching of Rabbi Abraham Isaac Kook (1865 1935), more specifically - as interpreted by his son Rabbi Zvi Yehuda Kook (1891-1982). It is the same ideology, which was in the background of Prime Minister Yitzhak Rabin's assassination (following the signing of the Oslo accords, which were meant to lead to Palestinian independence), and is also in the background of ongoing murderous violence by settlers against Palestinians. [viii] Such ideology sees the entire territory between the Jordan river and the Mediterranean as divinely promised Jewish land, the desired regime - a Jewish halachic theocracy, and the future status of the Palestinians - tolerated disenfranchised residents, but not equal-rights, voting citizens.
An entirely different, alternative analysis of the situation was offered just two days prior to the election by the young, influential right-wing columnist Amit Segal. Amit Segal holds an undisputed extreme right-wing patrimony as well: He is the son of journalist Hagai Segal, who was convicted and served a prison term for membership in a violent Jewish terror group, which targeted Palestinian mayors. [ix] 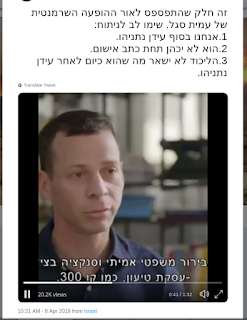 April 08, 2019 Twitter message, including an excerpt from Amit Segal's TV interview, predicting that regardless of the formation of a staunch right-wing government headed by Netanyahu , Netanyahu's political career is over either through a plea bargain, or a "Kav 300 deal".
---
Amit Segal's take on the evolving situation is that regardless of the outcome of the election and the likely formation of an extreme right-wing government, Netanyahu's political career is over. The system would not be able to contain a prime minister with such heavy load of corruption cases. However, Segal also reasonably predicts that the Israeli justice system is unable to address such level of corruption, particularly, since it also includes corruption of the security apparatus and military procurement. [x] Segal predicts one of two exit routes for Netanyahu, neither of which includes fair and public hearing: either a plea bargain with a lenient penalty, or even a Kav 300 style fake pardon with no indictment, no trial, and no conviction.
The 1984 Kav 300 affair is a notorious case, in which Shin-Bet senior operatives were involved in serious criminality. It is a landmark in the corruption of the Israeli justice system and the Israeli regime. [xi]
Regardless of the road ahead, it seems that all alternative involve further corruption of the Israeli regime under a heavy dose of messianic Jewish influence, enabled by US patronage...
LINKS
i  PM Netanyahu and Gantz both declare victory as Israeli exit polls show tight results | Russia Today
https://www.rt.com/news/456049-israel-election-exit-polls/?utm_source=browser&utm_medium=aplication_chrome&utm_campaign=chrome
ii Netanyahu faces indictment | Globes
https://en.globes.co.il/en/article-netanyahu-faces-indictment-1001276279
iii More money troubles in the Netanyahu family | Al-Monitor
https://www.al-monitor.com/pulse/originals/2019/03/israel-benjamin-netanyahu-nathan-milikowsky-police-elections.html
iv Netanyahu Says Will Begin Annexing West Bank if He Wins Israel Election | Haaretz
https://www.haaretz.com/israel-news/elections/netanyahu-says-will-annex-west-bank-in-next-term-1.7089387
v Jewish Defense League | Wikipedia