2016-08-27 Israel provides the technological totalitarian infrastructure for dictatorial regimes... Again...
===============
Here: Israel apparently provides the Emirates totalitarian monitoring technology.
Background:
a. It is not the first report of this kind.
b. In Israel the same news was published with patriotic pride - noting the hacking expertise...
c. Israelis live in a schizoid mode - denying that the same totalitarian tools are applied on all in Israel, which is no doubt No 1 "sigtot" and "humtot" regime today...

Associated Press
AJMAN, United Arab Emirates (AP) — The suspicious text message that appeared on Ahmed Mansoor's iPhone promised to reveal details about torture in the United Arab Emirates' prisons. All Mansoor had to do was click the link.
hosted2.ap.org|By AP Story

2016-08-25 Election computer fraud? Knesset is asked to clarify: Who developed, who operates, who secures IT systems of the Central Election Committee...

2016-08-25 Election computer fraud? Knesset is asked to clarify: Who developed, who operates, who secures IT systems of the Central Election Committee...
Recent publications claim large-scale fraud in the 2015 general election, which was perpetrated through IT systems of the Central Election Committee.  Freedom of Information request on the Knesset, filed today, tries to clarify, whether such systems were lawfully implemented, who is charged with their operation and security...  Numerous fraud cases have been documented in IT systems of the Israeli courts, and the Administration of Courts refuses to answer on similar requests.  Likewise - the Debtors' Courts - whose fraudulent IT systems are notorious.  The Israeli regime today can be viewed as operating through a series of "black boxes", which are fraudulent IT systems, representing Deep State control...
Read in blog: http://inproperinla.blogspot.co.il/2016/08/2016-08-25-election-computer-fraud.html 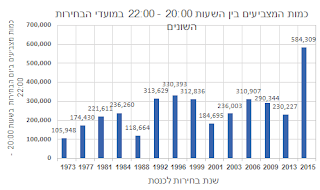 OccupyTLV, Auguest  25 - Freedom of Information request has been filed today on the Knesset, pertaining to IT systems of the Central Election Committee.
The request was filed following a recent series of publications, which pointed out internal inconsistencies in data, which were published by the Central Election Committee, and unusual deviations, relative to previous elections.  Such publications claimed large-scale fraud in the 2015 general election, the scope of whcih was estimated at 8 (out of 120) mandates in favor of Netanyahu's Likud party. [1]
Such publications raise the obvious questions:
a. Were IT systems of the Central Election Committee developed and implemented in compliance with the law? Was their integrity duly examined?
b. Who holds the ultimate administrative authority for such systems?
c. Who is charged with security of such systems?
In a meeting today in Tel-Aviv of protest activists with Chairwoman of the Knesset Oversight Committee, MK Elharar, she was asked about such election fraud claims.  Her response: "Everything is possible".
It should be noted that unauthorized source claims that the Shin-Bet is not charged with security of the systems of the Central Election Committee...

Following is the Freedom of Information filed today with the Knesset:

Fraud in IT systems of the Court
The State Ombudsman Report 60b (2010) documented the development and implementation of IT systems of the courts in the previous decade:
a. Contrast were signed with no legal tender.
b. Contracts were signed with no written specifications.
c. Systems were developed with no core supervision by State employees.
d. No independent examination, validation were performed by State employees prior to implementation.
e. Severs of the systems were removed from custody of the offices of the clerks of the courts to the custody of corporations.
f. Unknown number of people were issued double "smart-ID" cards.
Numerous cases of computer fraud in the courts have been documented in subsequent years, the most notorious - the Judge Varda Alshech "Fabricated Protocols" scandal.
Yet, the Administration of Courts refuses to duly answer on Freedom of Information requests:
a. Who is charged with operation of the systems in the various courts?
b. Who is charged with security of the systems.
In this case, in response to inquiry, the Shin-Bet responded that it was not charged with security of IT systems of the courts...

In parallel, Israeli media have recently reported that Netayahu completed asserting his control over all critical State IT systems. [2]

LINKS:
[1]2016-06-14 ISRAEL: Computer fraud in the Central Election Commission? Where is the Shin-Bet?
http://www.opednews.com/articles/ISRAEL-Computer-fraud-in-by-Joseph-Zernik-Election-Fraud_Israel_Netanyahu_Shin-Bet-160614-259.html