FOIA request filed on the Central Election Committee - integrity of IT systems
Based on FOIA responses by other state agencies on similar FOIA requests, the chances of true, honest FOIA response by the Central Election Committee are zilch.  Obviously, refusal of the Committee to truly respond on FOIA request of this nature would highlight concerns, previously published, of major computer fraud in the 2015 general election.
READ MORE: http://inproperinla.blogspot.co.il/2016/12/2016-12-14-foia-request-filed-on.html 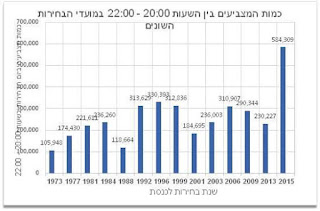 OccupyTLV, December 14 - FOIA request has been filed with the Central Election Committee (CEC), seeking documentation of lawful development, implementation, operation and security of IT systems of the CEC.
For reasons that are difficult to comprehend, the CEC previously claimed that it was exempt from FOIA.  In response, the Knesset enacted an amendment to the Act, specifically applying it to the CEC. The amendment became effective only December 01, 2016.  Therefore, the request was filed only now, under the Act in effect.
Prior to the effective date, the CEC "FOIA Officer" offered to conduct an informal FOIA request process.  However, as a devout formalist, I preferred to wait, lawfully pay the fees, and file a lawful FOIA request.
With the request, I also asked:
a. Confirmation of receipt of the request, together with lawful designation of FOIA request number.
b. Documentation of lawful appointment of Attorney Elad Naveh as CEC "FOIA Officer".

Will CEC provide a lawful response?
Based on prior experience - FOIA requests pertaining to government IT systems of the legislative branch (Knesset), the judicial branch (Administration of Courts) and the executive branch (Ministry of Justice) - the chances of honest FOIA response are zilch.
The confirmation (or lack of confirmation) of receipt and the designation (or lack of designation) of FOIA request number would indicate pretty soon the intentions of the CEC "FOIA Officer" in this matter.
The expectations with this FOIA request in fact are to document circusmstances, where the CEC refuses to disclose fundamentals regarding integrity of its IT systems, with it - regarding integrity of CEC itself.

2016-12-14 OccupyTLV - winter offensive by TLV muni============As in previous years, TLV Muni initiated a new winter offensive...Yesterday, in the midst of a rainstorm, TLV muni and Israel police arrived at the camp with a bulldozer to start demolishing tents. Some media were on location. TLV Muni placed notices on some of the tests, demanding that they be removed within 4 hours or face demolition.In contrast, news report, which reads like a release be TLV Muni spokesperson says that "it is not eviction, but ongoing joint agreement that received the force of a court decision.... the temporary permit for tents in the park will end on May 31."
More on the situation later.

Posted by Human Rights Alert (NGO) at 1:37 AM No comments:

Posted by Human Rights Alert (NGO) at 1:35 AM No comments: