Events of the latest round of violence would likely lead an outside observer to conclude that the segment of the Jewish-Israeli public, which was self-characterized in the past as "Religious-National", is today closer to "Nationalist", or even "Totalitarian" in its values and practices, and increasingly divorced from "Jewish".  That of course is not the view of those involved, who consider themselves the soldiers of the Lord.

Gaza, August 2014
____
OccupyTLV, Yom Kippur Eve, October 3 - the latest round of violence in Gaza, this summer, continues to reverberate in Gaza, in Israel, and around the world.

In Israel, key part of the legacy of the latest round of violence is the establishment by IDF of the Hannibal protocol in practice. It instructs IDF soldiers to employ any necessary force to prevent the capture of a live IDF soldier by the Palestinians, even if it involves the killing the captive soldier himself. The protocol is not new, but it was employed during the latest round of violence in Gaza twice, the better known case being the killing of Givati Brigade Lieutenant Hadar Goldin on August 1, 2014. [1,2]

While violence in Gaza was in process, Israeli media was oblique on the issue, and according to reports, Israel also tried to impose censorship on the foreign press in this matter.  All of that changed over the past couple of weeks:
Both Givati officers -  the late Lieutenant Goldin - who was killed in Gaza, and Lieutenant Eytan -who was in charge of executing the Hannibal protocol on Goldin - are observant Jews.  And in the aftermath of the case, the visit of  Lieutenant Eytan with the family of  Lieutenant Goldin was widely published. All involved were described as observant Jews.

No discernible protest has been raised against the Hannibal protocol from the Jewish observant segment of Israeli public, who tends to lean right, altough the  Hannibal procedure stands in clear violation of the basics of Jewish Halachic law: The sixth of the Mosaic Ten Commandments, "Thou shalt not kill", and the commandment of redeeming captives.

Moreover, numerous Halachic authorities in the State of Israel ruled over recent decades that captives, who were IDF soldiers, should be redeemed, even at the price of releasing Palestinians, who were convicted of terror acts of murder. In contrast, no Halachic ruling has been published in support of the Hannibal protocol. And yet, it appears that observant Jewish IDF soldiers embrace it. 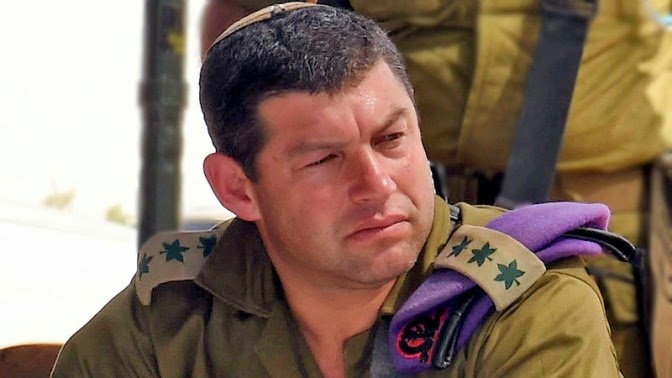 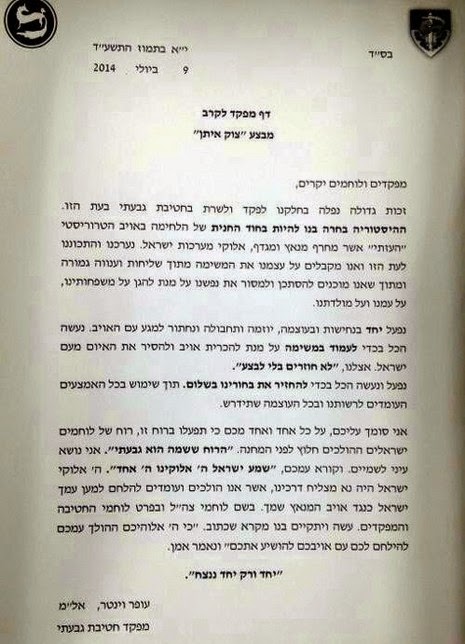 July 11, 2014 flyer by Givati brigade commander Ofer Winter. [5]
______
On July 11, 2014, Israeli media published a flyer,  which was distributed by Givati Brigade commander Colonel Ofer Winter to his soldiers, prior to the start of the ground operations in Gaza. Winter is an observant Jew. In the flyer, Winter refers to the Palestinians as a"blasphemous enemy", and invokes the Jewish credo: "Hear, O Israel: the Lord our God, the Lord is one," as a battle cry. [5]

The next day, media published news of protest against the flyer from secular Jewish-Israeli quarters, claiming that it turned IDF into a "religious militia". [6]  Observant Jewish-Israeli opinion writers found no fault in it...

Overall, the latest round of violence would likely lead an outsider to conclude that the segment of the Jewish-Israeli public, which was self-characterized in the past as "Religious-National", is today closer to "Nationalist", or even "Totalitarian" in its values and practices, and increasingly divorced from "Jewish".

That of course is not the view of those involved, who consider themselves the soldiers of the Lord. 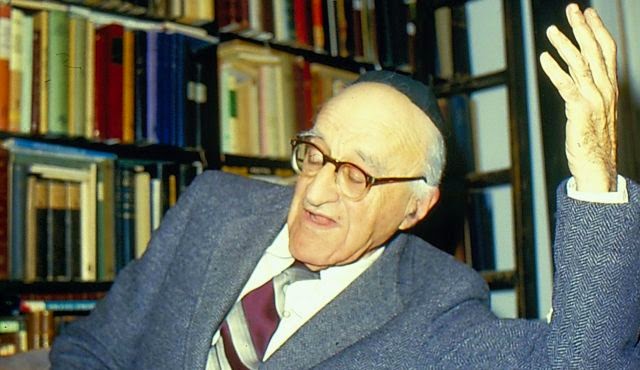 The late Prof. Yeshayahu Leibowitz: "Prophet of wrath, harbinger of the future". [7]

The most significant intellectual figure in Israel in the 20th century was Jewish observant,  Hebrew University Professor Yeshayahu Leibowitz (1903-1994). With the passage of time, his words, considered provocative at the time, stand loud and clear, particularly on two issues:
The evidence, too long to list here, shows that Leibowitz was right on both.