The deceptive, possibly harmful  response by the Knesset Freedom of Information today bears the fingerprints of the Shin-Bet...

Figure: Publication by activists, documenting adulteration of the 2013 election results data about 2 weeks ago on the Central Election Committee web site. [i]
____

OccupyTLV, October 10 – earlier today, FOIA response has been received from the Knesset (parliament). The request pertained to IT system of the Central Election Committee, asking records pertaining to its development, validation, operation and security. [ii]

The response, received today by email from the Knesset Freedom of Information office (copied below):

a) Fails to duly include a FOIA request number;

b) Fails to state the position of the person, who sent the email message;

c) Laptop security system flagged the attachment (the response) as a false computer file type and a security risk (see Figure 1, below), and

d) When opened, the file contained no text at all (see Figure 2, below).

The Knesset FOIA response is not at all surprising: Regardless of payment of request fees, the office refused to duly issue a Request Number, regardless of repeat requests.

The FOIA request was filed following publications alleging large-scale computer fraud in the 2016 general election, where PM Netanyahu’s win defied all pollsters’ up to the last minute predictions. Petition, which was filed with the Supreme Court in this matter was summarily denied for lack of standing. The fraud was estimated at 4-8 seats in the Knesset (out of 120). [iv]

Circumstances, where the Knesset is not ready, willing, able to uphold the Freedom of Information Act (that the Knesset enacted), in request pertaining to IT systems of the Central Election Committee (that the Knesset purportedly developed and operates), whose output is the foundation for the lawful authority of the current Knesset and the current executive, must again raise concerns regarding the nature of the current Israeli regime. [v] 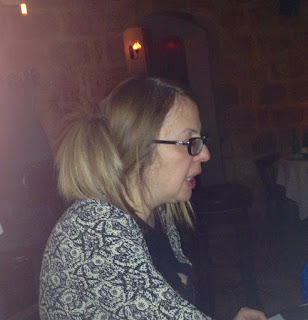 Figure: Attorney Yael Kotick, “coordinator” of the forced psychiatric hospitalization of anti-judicial corruption protester Joelle Ben Simon. Formerly, a senior Ministry of Justice officer, there is no information regarding her current appointment. FOIA response regarding her appointment came back as a black file.
_____

It is notable that the Knesset’s FOIA response today is remarkably similar to a recent response by the Ministry of Justice, pertaining to current appointment of Attorney Yael Kotick. Attorney Kotick has gained some recent notoriety as the “coordinator” of the forced psychiatric hospitalization of anti-judicial corruption protester Joelle Ben Simon. [vi] Attorney Kotick was represented to Ben Simon as a senior Ministry of Justice officer. And indeed she had been one until a few years ago. However, there was good reason to suspect that today she was on loan to the Shin-Bet. The FOIA response regarding her appointment was a blank file as well. It is possible that blank files are today the operating routine in FOIA requests that get uneasily close to Deep State in Israel…

Following is the reply, sent today to the Knesset Freedom of Information office

Figure 2.
_____
I herein request due, timely, lawful response on my Freedom of Information request, under the signature of the Knesset’s Freedom of Information Officer, on paper, by Israel Post, to my address:
Joseph Zernik, PhD
PO Box 33407
I would be glad to accept a preview copy by email to this email address.
Happy High Holidays,
Joseph Zernik
Occupy Tel-Aviv
CC:
Prof Eli Biham – head of the Technion Cyber Security Research Center
Prof Danny Dolev – head of the Hebrew University Cyber Security Research Center,
MK Karin Elharar – Chair of the State Oversight Committee.

On 2016-10-10 11:55 am, the Information Division wrote:
Greetings,
Attached is the response to your August 25, 2016 request pursuant to the Freedom of Information Act.
Please confirm receipt of this email.
Respectfully,
Anna Matzkik
______


[i] 2016-09-28 ISRAEL: Computer election fraud in the only digital banana republic in the middle-east? _ OpEdNews.com


[ii] 2016-08-25 Freedom of Information Request, filed on the Knesset, pertaining to IT systems of the Central Election Committee: Development, Validation, Operation, Security.


http://www.opednews.com/articles/Joelle-Ben-Simon-affair-co-by-Joseph-Zernik-Israel_Judicial-Corruption-160910-99.html
Posted by Human Rights Alert (NGO) at 8:01 AM No comments: