[עברית להלן]
נשיא בית המשפט העליון שוב נתפס בהונאה!
2014-12-02 ISRAEL: Supreme Court Presiding Justice again caught in Fraud!
Since the implementation of fraudulent IT systems in the Israeli Supreme Court in 2002, the justices engage in the issuance of fraudulent, simulated judicial records as a routine.  The practice is enhanced through the false appearance of unauthorized individuals as "Chief Clerks", and false certification by unauthorized individuals of judicial records.  As was the case during the Great Depression, conditions now prevailing in Israel (and the US) originate in widespread corruption of government, particularly the judiciary, and the financial system.  As was the case during the Great Depression, corrective efforts must start in reforming the Supreme Court! 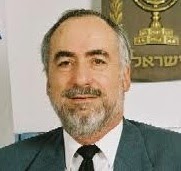 Figure: Israeli Supreme Court Presiding Justice Asher Grunis
_____
OccupyTLV, December 2 - yesterday I received response, pursuant to the Freedom of Information Act, from the Administration of Courts, which provides the definitive evidence of fraud in the certification of the "Judgment" in the petition Rotem v Samet in the High Court of Justice.  The petition originated in conduct of the Tel-Aviv Labor Court Judge Varda Samet, who perverted court procedures in the litigation of Rotem v Ministry of the Treasury-Tax Authority.  The "Judgment" of Supreme Court Justices Edmond Levy, Edna Arbel, Uzi Vogelman doomed Rafi Rotem - the Tax Authority whistle-blower, and determined that he was no whistle-blower at all.  His matter was caused by "muddied labor relations".

I claimed all along that the "Judgment" in the petition was a simulated court record, and that the certification on it was a case of forgery.

The matter came up in a group debate on Facebook with Attorney Hai Bar-El - CEO of Ogen Association "for fighting corruption".  Attorney Bar-El tried to cover up the obvious perversion in the court records below.   Eventually he compared me to a Nazi...

Since 2002, the Supreme Court does not duly serve its decisions.  Instead, it sends unsigned, uncertified decision records,  with no authentication letters, bearing the disclaimer "subject to editing and phrasing changes".  No reasonable person could accept such records as duly served court decisions, except Israeli attorneys...

Following my suggestion, Rotem filed repeat requests with Presiding Justice Grunis for a duly signed and certified, "True Copy of the Original", copy of the Judgment in his petition, issued by Justices Edmond Levy, Adena Arbel, Uzi Vogelman.

a. Decision in petition of Miriam Macmull
Petitioner Macmull is not an attorney, but she read the law and figured out what she should ask.  I reached the conclusion that the Supreme Court engaged in fraud and that the Chief Clerks were impostors following intensive data mining. Macmull reached the same conclusion well before me, based on what she calls "super-sensory communication".  Accordingly, she eventually filed a criminal fraud complaint against "Chief Clerk" of the Supreme Court Sara Lifschitz well before I did.

However, based on my correspondence with Supreme Court Presiding Justice Asher Grunis, I could prove his collusion.  Therefore, in October 2013, I also filed a fraud complaint against him.  Two weeks later, Lifschitz "departed" from the Supreme Court.

Figure: Purportedly cetified decision record in the petition of Miriam Macmull.  Instead of the justices signatures, what appears is (-) and the justice's name, all in the handwriting of Sarah Lifschitz, who falsely appeared as "Chief Clerk" of the Supreme Court for 12 years with no lawful appointment record and routinely falsified court records.
____
Attorney Bar-El took 24 hours to consider the record, then opined that there was no fault in the record, and the signatures were "scanned signatures".
Macmull says that the record isn't even a photocopy, all purported signatures are "wet" (pen and ink), all in the hand-writing of Sara Lifschitz.
Later, I also documented that Lifschitz had no lawful appointment as "chief Clerk", but falsely appeared as such during the tenure of Presiding Justices Barak, Beinisch, Grunis, and falsified court records all along...

b. Decision in Rotem's petition - response No 1
Petitioner Rotem explicitly asked Presiding Justice Grunis for a copy of the decision, which is duly signed by the justices, and duly certified by the Chief Clerk or Magistrate of the Court, that the wording of the certification be as stipulated by law, "True Copy of the  Original", and that the name and authority of the signer of the certification be spelled out on the face of the record. 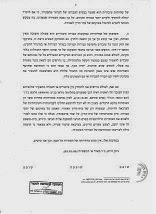 Figure: Purportedly certified decision record in the petition of Rafi Rotem, as received after the first request, addressed to Presiding Justice Grunis.
The record cannot be deemed an authentic, valid and effectual court record:
i.  It is not signed by the justices at all.
ii.  It is purportedly certified by a person, whose name and authority fail to appear on the face of the record.
iii. The wording of the certification is not that, which is stipulated by law, and is meaningless in the context of certification of court record.

c. Decision in Rotem's petition - response No 2
Following the receipt of response No 1, Petitioner Rotem again wrote to Presiding Justice Grunis, pointed out the invalidity of the record, which was received as response No 1, and asked for a valid, signed and certified copy of the decision in his petition. 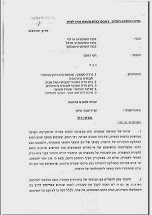 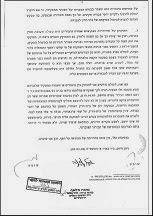 Figure: Purportedly certified decision record in the petition of Rafi Rotem, as received after the second request, addressed to Presiding Justice Grunis.
The record cannot be deemed an authentic, valid and effectual court record:
i.  It is purportedly certified by a person, whose authority is"Coordinator", but not Chief Clerk, as stipulated by law.
ii. The wording of the certification is not that, which is stipulated by law, and is meaningless in the context of certification of court record.
Attorney Bar-El dismissed the invalid wording of the certification as irrelevant...
iii. Coordinator Khalaf's personal stamp is altered by hand.
2) Correspondence with Presiding Justice Grunis in this matter
Substantial correspondence took place with the office of Presiding Justice Grunis in this matter (see links).
a. The repeat requests by Petitioner Rotem for a signed and certified copy of this decision records.
b. Additional correspondence by this writer, where the three records, shown above, were provided, and Presiding Justice Grunis was asked to explain the glaring deficiencies in the records, and the obvious differences in the manner of their execution.
There is no doubt that a reader of the correspondence would reach the conclusion that Presiding Justice tried to use the authority of his office to create the false impression that the records were valid and effectual records of the Supreme Court. 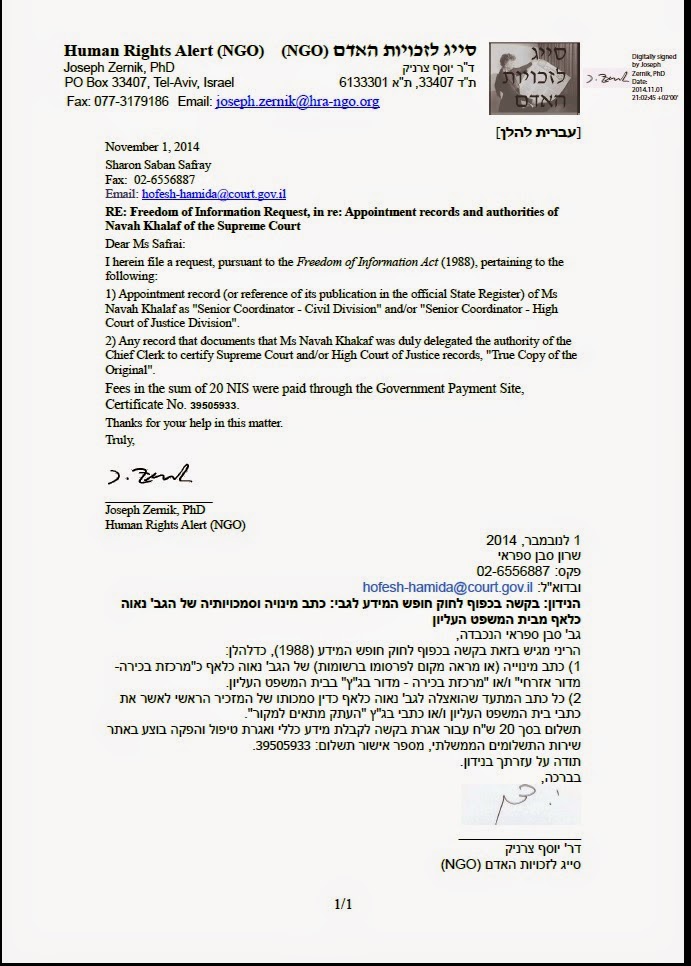 Figure: Request, pursuant to the Freedom of Information Act, for the appointment record and authority of Ms Nava Khalaf to certify Supreme Court records. 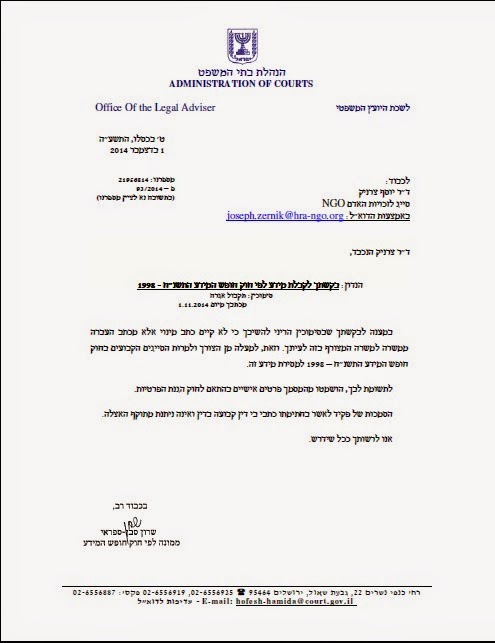 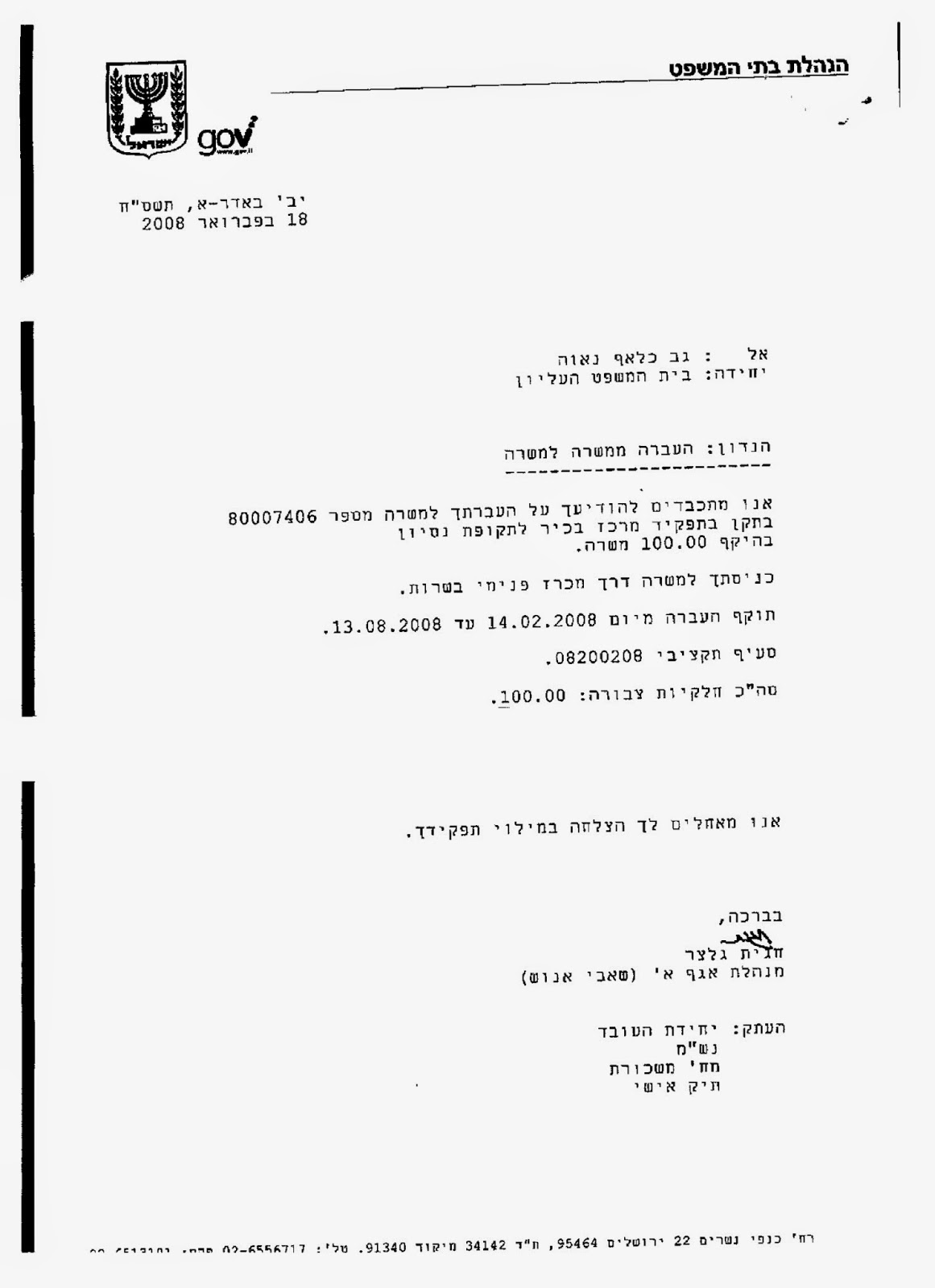 4) Signatures by unauthorized persons, simulated service - well-known fraud methods in the courts for hundreds of years!
The Texas law, cited below, pertaining to Simulating Legal Process, outlines the respective conduct, including the signature on court records by unauthorized persons and the invalid service of invalid court records, or service of records that bear comments that establish the record as invalid on its face, etc...
Texas Penal Code - Section 32.48. Simulating Legal Process
§ 32.48. SIMULATING LEGAL PROCESS.
(a) A person commits an offense if the person recklessly causes to be delivered to
another any document that simulates a summons, complaint, judgment, or other court process with the intent to:
(1)  induce payment of a claim from another person;  or
(2)  cause another to:
(A)  submit to the putative authority of the document;  or
(B)  take any action or refrain from taking any action in response to the document, in compliance with the document, or on the basis of the document.
(b)  Proof that the document was mailed to any person with the intent that it be forwarded to the intended recipient is a sufficient showing that the document was delivered.
(c)  It is not a defense to prosecution under this section that the simulating document:
(1)  states that it is not legal process;  or
(2)  purports to have been issued or authorized by a person or entity who did not have lawful authority to issue or authorize the document.
(d)  If it is shown on the trial of an offense under this section that the simulating document was filed with, presented to, or delivered to a clerk of a court or an employee of a clerk of a
court created or established under the constitution or laws of this state, there is a rebuttable presumption that the document was delivered with the intent described by Subsection (a).
(e)  Except as provided by Subsection (f), an offense under this section is a Class A misdemeanor.
(f)  If it is shown on the trial of an offense under this section that the defendant has previously been convicted of a violation of this section, the offense is a state jail felony.
Added by Acts 1997, 75th Leg., ch. 189, § 3, eff. May 21, 1997.

5) Conclusions
a. The Supreme Court never entered a valid and effectual decision in the petition Rotem v Samet.  The record, which was presented to Rotem as the decision in his case was only a simulated court record.  However, because of this simulated court record, Rotem's fate was doomed.  Other courts and the State Ombudsman refused to accord him equal protection under the law.  The matter should be viewed in its general context: The Supreme Court in fact provided its patronage to conduct of the Tax Authority, which should be viewed as State Organized Crime, benefiting crime figures, tycoons, and persons related to the ruling party.  And whistle-blower Rotem was and is persecuted by the courts and the justice system for over a decade.  The case also clarifies the inexplicable conduct of Justice Grunis in failing to remove Tel-Aviv Judge Varda AlSheikh from the bench, after she was caught perverting court records.  Obviously, when the Supreme Court itself perverts court records, it can't find other judges culpable for the same conduct...
b.  In the past, the Administration of Courts refused to respond no Freedom of Information requests for the appointment records of clerks, as documented in the Human Rights Alert (NGO) to the Human Rights Council of the United Nations.  Therefore, the current response is surprising, providing incriminating evidence regarding conduct of the Supreme Court.
c. Corruption of the judges - first and foremost the justices of the Supreme Court - and attorneys is central to conditions in Israel today.
d. The fight against corruption is not going to get anywhere, when led by attorneys, who try to cover up corruption of judges and attorneys... 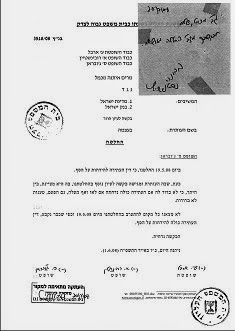 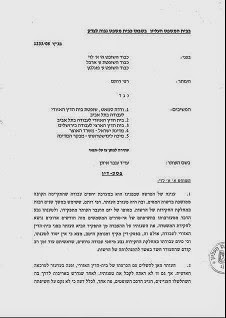 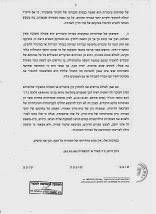 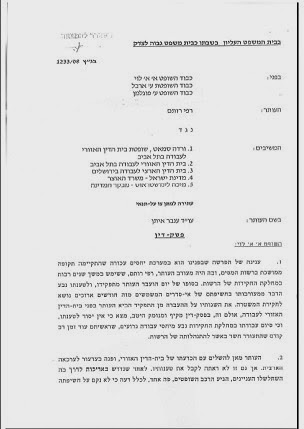 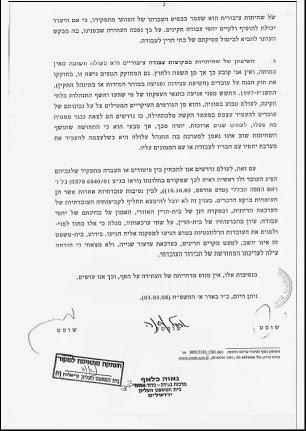 Posted by Human Rights Alert (NGO) at 5:05 AM No comments:

Posted by Human Rights Alert (NGO) at 2:50 AM No comments:

Conetta (@BmoreConetta) posted a photo on Twitter
Get the whole picture - and other photos from Conetta
PIC.TWITTER.COM

Posted by Human Rights Alert (NGO) at 2:50 AM No comments:

NYCLU (@NYCLU) posted a photo on Twitter
Get the whole picture - and other photos from NYCLU
PIC.TWITTER.COM

Posted by Human Rights Alert (NGO) at 2:49 AM No comments: