Posted by Human Rights Alert (NGO) at 1:09 PM No comments:

Dear Friends:
Best wishes for 2016! I write to ask your signature on a petition, calling upon Israeli President Reuven Rivlin to commute the sentence of non-Jewish, non-Israeli citizen Roman Zadorov, who is serving a life term in prison for the gruesome murder of a 13 yo girl, which he had nothing to do with.
Roman Zadorov is serving a life sentence for the gruesome 2006 murder of 13.5 Tair Rada, which he had nothing to do with.  The case exposed vast corruption of the Israeli justice system.
________
My OpEdNews.com article, below, provides the first comprehensive review of the case in English (or in Hebrew for that matter).  The article cites the opinions of several leading Israeli law professors, particularly Mota Kremintzer, Boaz Sangero, Yoav Dotan, as well as acclaimed pro bono defense attorney Avigdor Feldman, who courageously stood up to the corrupt justice system. Leading forensic medical experts Dr Maya Forman and Dr Chen Kugel also objected to this travesty, and the former suffered retaliation by senior officers of the Ministry of Justice as a result... Attempt to tamper with the testimony of the latter resulted in a scathing report by Ombudswoman of the Prosecution Judge Gerstel, a criminal complaint against senior Ministry of Justice officers by the Israeli Governability and Democracy Movement, and calls for the resignation of Chief State Prosecutor Shay Nitzan...
If necessary, I can provide additional media reports in English and Hebrew, supporting the innocence of Zadorov.  There are of course numerous media reports about this affair and its ramifications (easily accessible by googling "רומן זדורוב", or "Roman Zadorov"). I also inspected the court records in this case. My filings, related to the inspections,  provide direct evidence of the lack of integrity of the courts in this case as well. These filings are all bi-lingual, English-Hebrew, and I can also provide you copies of those.
OPEDNEWS.COM
The Zadorov Affair: False murder conviction of a Ukrainian exposed massive corruption of the Israeli justice system
http://www.opednews.com/articles/The-Zadorov-Affair-False-by-Joseph-Zernik-Exoneration_Israel_Judicial-Corruption-And-Pedophilia-151215-702.html
AVAAZ PETITION
Israeli President Reuven Rivlin: Free Roman Zadorov - use your authority for pardon or clemency!
https://secure.avaaz.org/en/petition/Israeli_President_Reuen_Rivlin_Free_Roman_Zadorov_use_your_authority_for_pardon_or_clemency/?nMtCOhb
In a dramatic hearing this past Wednesday, the Israeli Supreme Court denied (2:1) Zadorov's appeal.  However, Attorney Feldman intends to ask for a new hearing by a wider panel.  The decision in this matter, which was almost 300 page (roughly 10 times longer than the average in murder conviction appeal cases), resulted in a paradoxical effect: Overnight, public support for Zadorov in Israel almost doubled!  Online support groups for Zadorov now count over 100,000 members! Nothing like this has ever happened in Israel before...
The case of Roman Zadorov is comparable to the case of the Jewish Mendel Beillis in the Ukraine 100 years ago...  The international community voiced its protest then, and should be likewise heard now!
All the best, and hoping for a better world in 2016,
Joseph Zernik, PhD
Human Rights Alert (NGO)
Occupy Tel-Aviv

ZADOROV Affair: Social network storm
Following the delusional "Judgment" by the Israeli Supreme Court on Wed (most likely unsigned, like all Supreme Court justice panel in this case), which denied Zadorov's appeal, the number of supporters in social media networks doubled and tripled.  In one group alone, "All the truth about Tair Rada's murder", the number of supporters grew from about 30,000 to 111,027.
Members are openly talking about total corruption of the justice system. For example, information below was uploaded, from years ago, which points clearly to investigation directions, which the Israel Police, the State Prosecution and the courts deliberately ignored.
Please sign and share the petition, calling upon Israeli President Reuven Rivlin to commute the sentence of Roman Zadorov and affect his immediate release.  The petition is written in English, Hebrew and Russian.  Please distribute abroad, since intentional support is key for success here.
Commuting the sentence was also the intermediate solution in the Amos Baranes affair.  It did not require admission of the crime.  Later, it took years before Baranes was fully exonerated and compensated for years of false arrest...
Last night, notable US Rabbi Michael Lerner joined the petition!

Below are additional materials, pointing to students in Tair Rada's school as the most likely suspects in the murder, and deliberate disregard of the Israel Police, the State Prosecution and the courts of such evidence. 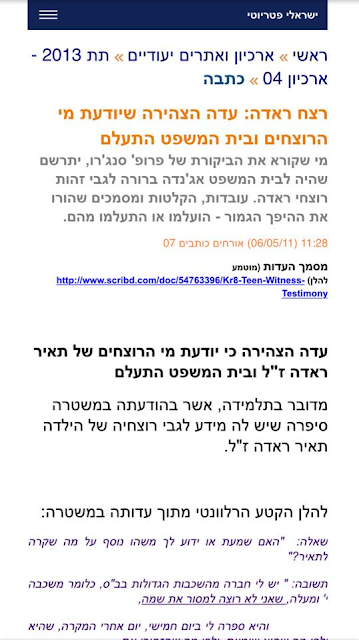 Rada murder: A girl testified in court that she knew, who the murderers were, but the Court ignored her testimony
Whoever reads Professor Sangero's criticism of the Court, would realize that the Court had a clear agenda regarding the identity of the murderer, and ignored any facts, recording, or documents, which showed the exact opposite.

Following is the testimony document (links is provided in the post)

A girl testified in court that she knew, who the murderers were, but the Court ignored her testimony
The girl testified in police investigation that she knew the identity of the murderers.
Following is the relevant part of her Israel Police investigation statement:
Q: "Have you heard or do you know anything else regarding what happened to Tair?"
A: I have a friend from a higher class, meaning 10th grade or higher, whose name I wouldn't like to provide, and she told me on Thurdsday, a day after the murder, that she...
_____

Social network post providing a news report from Walla, on December 11, 2006 (5 days after the murder), which was later removed from the network 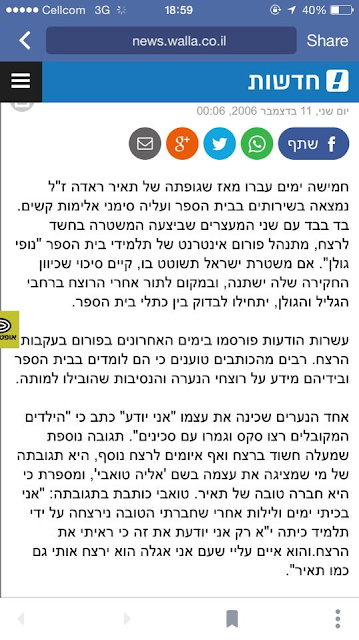 Five days have passed since the body of Tair Rada was found in the bathroom of her school, with serious violence signs on it. At the same time that the Israel Police is conducting its investigation, and two detentions of suspects, the internet forum of the Nofey Golan school students provides additional information on the case.  If the Israel Police ever bother to read the forum, perhaps its investigation direction would change, and instead of searching for the suspect in the vast space of the Golan Heights and the Galilee, they would focus inside the walls of the school.
Dozens of notices were posted in the forum in recent days, following the murder. Many of the writers say that they study in the school and that they have information regarding the identity of the murderers and the circumstances that led to the murder.
One of the boys, who took the identity "I KNOW" wrote: "The popular boys wanted sex, and ended up with knives." Another girls student, who took the identity "Aliya Tuweibi",  writes about a suspect in the murder of Tair Rada, and threats of an additional murder. She writes that she is a good friend of Tair, "I cried days and nights after the murder of my good friend by an 11th grade boy.  I know, because I witnessed the murder.  He threatened that if I say a word he would murder me too, like Tair".