The right to peacefully secede from cooperative nationhood constructs is becoming more prominent issue with the setting in of the Medieval-Digital Era.  It becomes apparent that small nations (Iceland), cities or locations which hold unique privileges in international law (Hong Kong, Macao, Jerusalem) are likely to fare better than most, and possibly remain beacons of liberty in a world that is largely subjugated.  Chartered Hansa cities and Free Cities were bastions of knowledge and liberty during the late European Middle Ages.
Likewise, the fact that the right for peaceful secession was established by Quebec, is likely to reign in abuses by the Canadian federal government.
Raising the issue of peaceful secession in the United States is likely to establish what is already apparent regarding the nature of the current regime in the United States.
jz
____________
New York Times

LONDON — Scotland would have to renegotiate membership in theEuropean Union and other international organizations if it votes for independence in a referendum next year, according to legal advice published on Monday by the British government.

Follow@nytimesworldfor international breaking news and headlines.
Twitter List: Reporters and Editors
The unusual decision to make public an official legal opinion rekindled and intensified the debate over the terms under which Scotland might achieve a divorce from the rest of Britain — a discussion being watched closely in other parts of Europe where separatism is on the rise.
The authors of the legal brief reached conclusions that are in line with arguments already made by the British government. Still, the document drew a prickly response from advocates of Scottish independence, who have treated the question of European Union membership for an independent Scotland as essentially a technical issue.
The European Commission president, José Manuel Barroso, said last year that an independent Scotland would have to apply for membership. That raised the possibility that Scotland would, like other newly admitted members, be obliged to adopt the euro currency, an unpopular prospect in Scotland. Britain, which was a member of the union before the euro was created, has no such obligation and has formally opted out.
The legal advice suggests that if Scotland becomes independent, it will be a “new state,” while the “remainder of the United Kingdom” would be considered a “continuing state,” according to a summary of the 57-page document that was released ahead of the full publication. The continuing state would automatically keep the rights, obligations, memberships, treaty relationships and powers under international law that the United Kingdom currently has, while the new state would have to start from scratch.
“For the U.K. government to argue that the U.K. will be a ‘continuing state’ and that an independent Scotland would have no rights betrays a near colonial attitude to Scotland’s position as a nation and gives lie to any suggestion that they see Scotland as an equal partner in the U.K.,” Nicola Sturgeon, Scotland’s pro-independence deputy first minister, told the BBC.
She added: “I do think this is an incredibly arrogant attitude for the U.K. government to take, that somehow they keep all the rights of the U.K. and Scotland gets nothing.”
“The reality is that the status of Scotland and the rest of the U.K. following a ‘yes’ vote in autumn 2014 and before Scotland became independent in 2016 will be determined not by assertions of law, but by negotiation and agreement,” she said.
Ms. Sturgeon had said on Sunday that Mr. Cameron’s attitude reminded Scots that he led a government that they did not vote into power. In the 2010 general election, Mr. Cameron’s Conservative Party won only one of Scotland’s 59 seats in Parliament, and his coalition partners, the Liberal Democrats, only 11.
The debate on how Scotland might achieve independence has implications throughout Europe, particularly in Spain, where separatist sentiment is strong in Catalonia.
Spain’s Basques have a high degree of autonomy, as do the Flemish, Walloon and much smaller German-speaking communities in Belgium. Activists in those and other regions across the Continent are closely watching the constitutional debate in Britain, which comes at a time when pressure on public finances, following the debt crisis in the euro zone, has tended to inflame old grievances.
The British government’s legal opinion was written by two experts on international law, Prof. James Crawford of the University of Cambridge and Prof. Alan Boyle of the University of Edinburgh.
Their opinion said the only way that both Scotland and the rest of Britain would become “new states” in the legal sense would be if the rest of Britain agreed to adopt such a status — something that the British government has ruled out.
The document rejected the idea that an independence vote would create two such new states, and also rejects suggestions that an independent Scotland would revert to its status before the 1707 Acts of Union, which united Scotland and England. Before those acts, the two were separate states with separate parliaments under the same monarch.
Last week, Scotland’s first minister, Alex Salmond, who is campaigning for independence, outlined transitional arrangements if Scotland voted “yes” next year. Under this blueprint, Independence Day would probably be in March 2016, with the first elections to a parliament for a fully independent Scotland taking place two months later.
On Sunday, Prime Minister David Cameron of Britain said: “I have no time for those who say there is no way Scotland could go it alone. I know firsthand the contribution Scotland and Scots make to Britain’s success — so for me there’s no question about whether Scotland could be an independent nation.”
“The real question is whether it should — whether Scotland is stronger, safer, richer and fairer within our United Kingdom or outside it.”
Alan Cowell contributed reporting.
Posted by Human Rights Alert (NGO) at 10:49 PM No comments:

Silman is not a common last name in Israel.
Therefore, the question comes up: Is there any relationship between  Kadish and Esther Silman, listed among the founders of Tel Aviv on the 40the anniversary memorial, and self-immolated Moshe Silman?
Any information would be gratefully received.
JZ
_____ 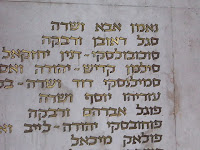 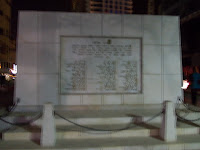 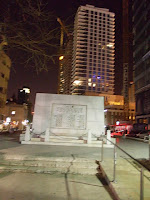 Kadish and Esther Silman, among the Founders of Tel Aviv in 1919. 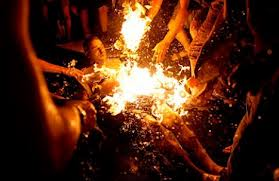 LAPD officers fired on this car with clear intent to kill (check out the bullet holes behind the driver-seat position). Trouble was, it was the wrong make and wrong color, and instead of Dorner, it was two Latino women, one of whom is now in serious condition from her wounds. No warning was given before the barrage.
Posted by Human Rights Alert (NGO) at 9:36 PM No comments: