The expectations from Warren should be lowered.  I corresponded with her and two other members of the TARP Board, including the Inspector General.  I provided them with mountaneous evidence of racketeering by the highest officers of Bank of America, which should have excluded the Bank from benefiting from TARP bailout programs.  TAPR Board and its Inspector General had no interest in investigating such matters.  JZ
_____________
Senator Elizabeth Warren Grills Financial Regulators
By Justin O'Brien
It was an artful if devastating performance. In just seven minutes, Senator Elizabeth Warren from Massachusetts signaled the arrival of what appears destined to be a powerful force on Capitol Hill.
http://www.informationclearinghouse.info/article34010.htm
Posted by Human Rights Alert (NGO) at 2:18 AM No comments:

Whoever thought that abuse of human rights by the US government abroad would not spill over to the United States, must have been delusional. jz
Public hanging, part of the Mexican narcowars

With ongoing discussion on left right and center, of government v people armed confrontation, the below should be considered a tinder box. The quoted paper is from the left this time. jz 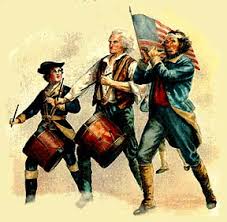 By Kathy Malloy (about the author)
...
...
A different kind of protest is being planned in cities around the US next Saturday by a different group of activists.  These folks don't seek environmental protection as much as the right to carry military assault rifles on the streets of their home towns and "stand their ground" with lethal force if they feel the slightest threatened.
Compare and contrast these socially conscious and environmentally-responsible demonstrators with the NRA Rifles-n-Rapture loonies who want to carry Big Loaded Weapons into churches, kindergartens, sports bars, credit unions, hospitals, and any other place that might benefit from a good shoot-out.
This is from the "Day of Resistance" website:

"On January 16, 2013, President Barack Obama issued 23 executive actions against your 2nd amendment Constitutional right to bear arms. He did this without the consent of Congress which in itself, violates the foundation of the Constitution and the co-equal branches of government. In response to these unconstitutional actions by the President, on .223, February 23, 2013 the American people will stand together in defiance to protect the right that protects ALL of our rights, the 2nd Amendment!"

Sorry to say the main Teabagger website is reporting that there is just not enough money for their little national bang-bang show. Perhaps fundraising was hampered by the scores of gun-related injuries at the last pro-gun rally?  Maybe the protesters are starting to realize their pet cause might just kill them, y'think?
According to  Daily Kos...

"TheTeaParty.net, a well-known conservative group, reached out to supporters to say that it is 'deeply embarrassed' to have failed to raise enough money in the last several weeks to fund a nationwide series of pro-gun rallies scheduled for Feb. 23. Last week we announced that we needed to raise $100,000 to market the Day of Resistance to make sure that there are HUGE crowds at all of these rallies,' read the Wednesday email from outreach director Dustin Stockman. 'Unfortunately we remain well short of our goal. As of writing we have only raised $26,125.72 towards the $100,000 goal.'"

Did you ever notice that Progressive activists seek to protect things, like human lives and the environment, while their Neocon counterparts just want to cut a wide swath of death and destruction?

www.mikemalloy.com
Kathy never expected a career in radio as a talk show producer. Born and raised in Atlanta, Georgia, Kathy was completing her nursing degree when in 2001 - in an emergency - she was asked to fill in as the producer of Mike's program. Within a few (more...)
Posted by Human Rights Alert (NGO) at 2:01 AM No comments:

The original OpEd piece, true to form, ended with a question mark.  I took the liberty of changing it to an exclamation mark. jz 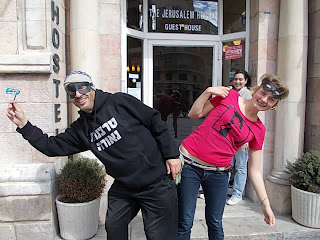 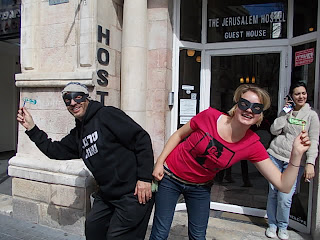 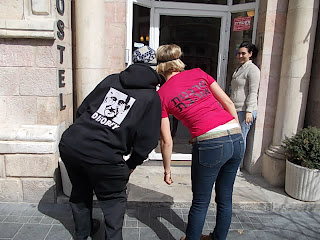 Elena models the "Loving Disobedience" design, black print on fuschia base, with John and Yoko in the nude, while Joseph dons the "Enlightened Disobedience  sweatshirt, white print on black base, with Gandhi on the back.  All designs, Hebrew and English, are posted on the sidebar of this blog.
_______________

Civil Disobedience: The Only "Weapon" We Have Remaining?

By Camillo "Mac" Bica (about the author)

opednews.com
Is the situation in this nation so dire that civil disobedience is the only recourse remaining, the final option? Can we expect civil disobedience to accomplish what voting, demonstrating, etc., could not? Most importantly, perhaps, should civil disobedience prove ineffective as well, must activists admit that further struggle for justice is futile and the prospect of non violent change unlikely? To answer these questions, it will be necessary to consider in some detail the nature of civil disobedience and the conditions required for it to be effective.Mario Cuomo, commenting on the politicalprocess, once observed, "You campaign in poetry. You govern in prose." Though candidates for public office frequently campaign on a platform of change, when elected, promises remain unfulfilled and what they inevitably deliver is more of the same. Beholden to the special interests and the Super PACS,they govern solely in the interest of the wealthy and the privileged, and remain blatantly unresponsive to the general will, the needs of the majority of the people, and to the dictates of law and morality.
Consequently, respected social commentators such as Chris Hedges ,Noam Chomsky , Daniel Ellsberg , Cornell Westand others have argued that our system of government is broken. Perhaps as a perceptive and realistic appraisal of the current political situation in this nation or as an expression of frustration with the lack of progress achieved after many years of activism they have concluded that if change is to occur, if justice and morality are to prevail, activists can no longer be content supporting one political party or another or with picking up a sign and participating in a demonstration. Rather activists must ratchet up the frequency and scope of nonviolent direct action -- civil disobedience. Chris Hedges proclaims, "Civil disobedience is the only weapon we have left to save not only the ecosystem that sustains life but the nation itself. Corporate forces, unregulated, unfettered corporate forces exploit everything; human beings, the natural world, until exhaustion or collapse."