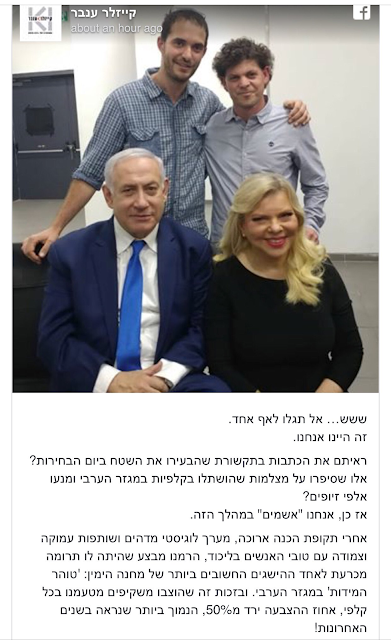 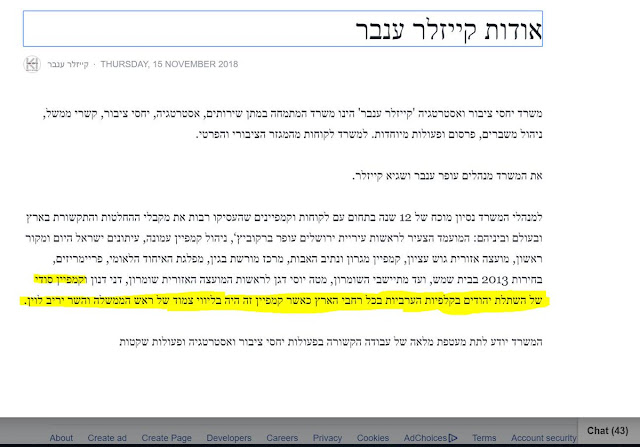 Keizler Inbar PR firm post, boasting the success of a secretive, “amazing logistic” operation, in collaboration with PM Netanyahu, in which cameras were illegally planted in Arab ballot stations, “preventing thousands of forgeries”, and suppressing voting rates below 50%. [i] During the April 9, 2019 election, Police was called to stop the illegal videotaping.
---

Tel-Aviv, April 11 – as part of Arab voter suppression efforts, Netanyahu’s Likud party illegally hired some 1200 people to go with body cameras to ballot stations in Arab population centers . Later, they took pride in achieving their goal (uniquely low Arab voter turnout), and justified it by claiming that Arabs were notorious for voter fraud. [ii]
In contrast, a the morning after election day, activists posted the ballot station outcomes from the Central Election Committee web site, showing voter turnout in Jewish settlements in Palestine, ranging between 97 and 173% … 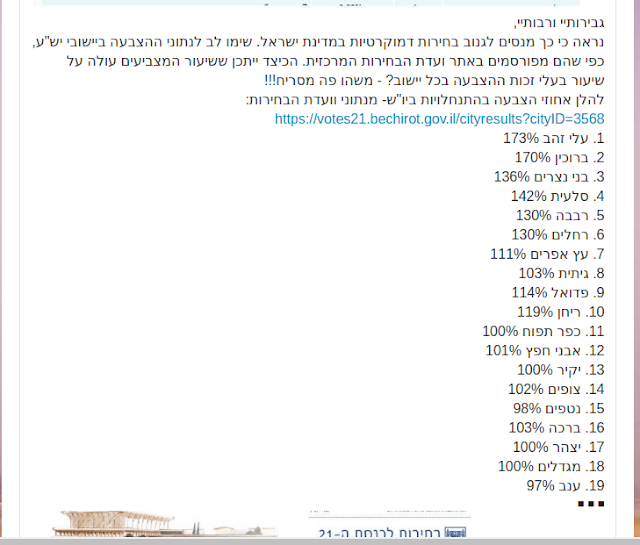 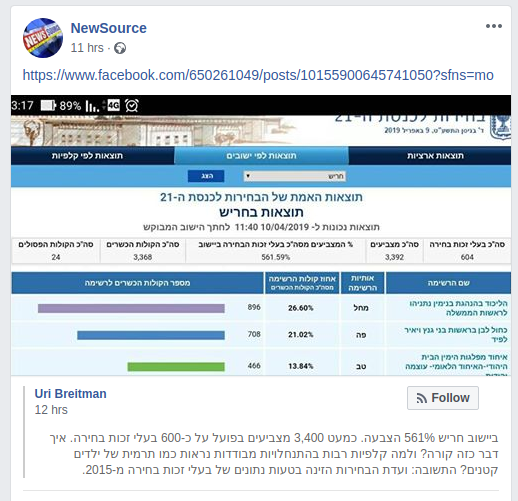 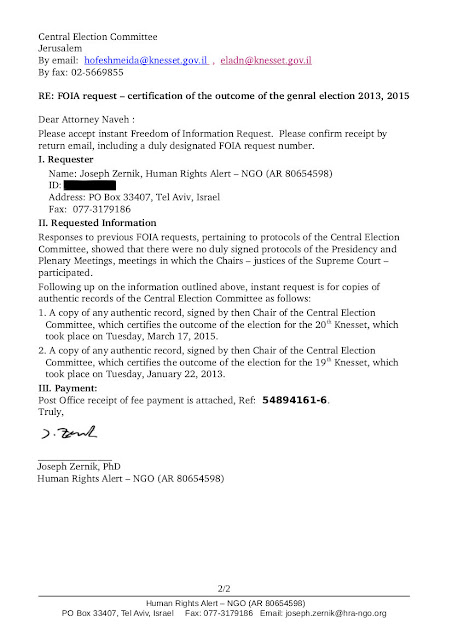 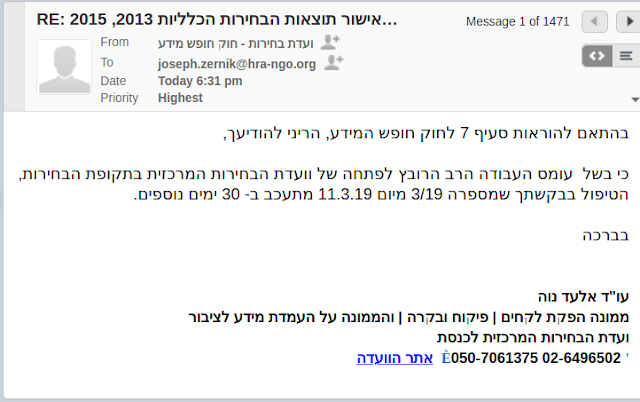 Top: March 11, 2019 FOIA request (03-2019), filed with the Central Election Committee by Human Rights Alert – NGO, seeking documentation of certification of the 2013 and 2015 general election outcomes by Supreme Court Justice, who served as Committee Chairs. Bottom: April 08, 2019 (a day prior to the general election) note by the Committee, extending the lawful time for response by 30 days, due to “work overload”.
--- 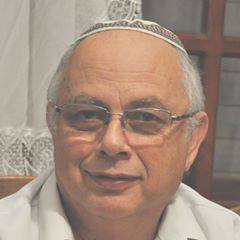 Mr Lazar Dudovich – according the the Central Election Committee he is the Committee’s IT Director, but no record to that effect could be found by the Committee.
---
* Other FOIA responses established that the Committee had no certification of compliance with the legally binding Israeli Security Standard for IT systems of organizations. Likewise, the Committee had no documentation of the appointment and job description of Mr Lazar Dudovich, who the Committee stated was its IT Director, in charge of IT system development, implementation and operation.
The circumstances surrounding the Israeli Central Election Committee and its IT systems are particularly bizarre, given that Israel is self-advertised as a hi-tech, start-up nation, and cyber superpower. [vi] E.g., in what was exploited as part of Netanyahu’s election propaganda, in February Israel launched a spacecraft to the moon. [vii]
In recent years, PM Netanyahu has also developed a National Cyber Security Array under his direct control in the PM office with no due foundation in law. Such initiative is seen as an attempt to neutralize the Shin-Bet, which is charged by law with “securing procedures and institutions of the democratic regime”. The initiative was protested as “an undemocratic measure”. In recent years, PM Netanyahu has also established and has been directly funding Cyber Security Research Centers in computer science departments of all major Israeli universities. [viii] Consequently, it has become exceedingly difficult to elicit expert academic opinions regarding Israeli e-government systems and cyber security issues. [ix]
The Human Rights Alert submission for the UN Human Rights Council 2018 Periodic Review of Israel focused on fraud in e-government systems, particularly in law and justice agencies. [x] The submission was incorporated into the final report of the UN High Commissioner of Human Rights with the note: [xi]
24. HRA-NGO highlighted the serious deterioration in integrity of law and justice agencies as a consequence of the implementation of e-government systems. It affirmed that the validity and integrity of any legal and judicial records of Israel should be deemed dubious at best.
In short: the State of Israel provides a unique example of the principle, stated by Harvard law professor Larry Lessig, “Code is Law”, and the consequences of implementing invalid or fraudulent e-government systems. [xii]

viii ISRAEL: Computer election fraud in the only digital banana republic in the middle-east? | OpEdNews.com

Posted by Human Rights Alert (NGO) at 7:54 PM No comments:

Posted by Human Rights Alert (NGO) at 4:07 AM No comments: