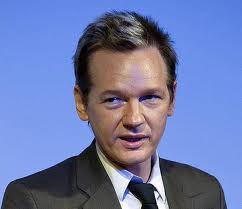 Information Clearing House Newsletter
News You Won't Find On CNN
December 13, 2010
~~~~~~~~~~~~~~~~~~~~~~~~~~~~~~~~~~~~~~~~~~~~~~~~
===
Assange attorney: Secret grand jury meeting in Virginia on WikiLeaks: "it does seem to me that what we have here is nothing more than a holding charge." The United States just wants Assange detained, he said, so "ultimately they can get their mitts on him."
http://bit.ly/esgVVu
===
Media chiefs throw support behind WikiLeaks: Some of Australia's most senior media professionals, including bosses of major newspapers, television networks and websites, have written to Prime Minister Julia Gillard to express their support for WikiLeaks.
http://au.finance.yahoo.com/news/Media-chiefs-throw-support-abc-782600196.html?x=0
===
Rudd prepared to intervene for Assange: Australian Foreign Minister Kevin Rudd has defended the legal rights of WikiLeaks founder Julian Assange, who's preparing to face court in London.
http://www.stuff.co.nz/world/australia/4451800/Rudd-prepared-to-intervene-for-Assange
===
Why did I back Julian Assange? It's about justice and fairness: Even my mother asked why I would stand surety for an alleged rapist. I was there because I believe this is about censorship
http://www.guardian.co.uk/commentisfree/2010/dec/11/julian-assange-jemima-khan
--
Posted by Human Rights Alert (NGO) at 4:38 PM No comments:


December 7, 2010 | 10:35 am
Bank of America is paying $137 million to settle government accusations that it paid kickbacks to win business from municipal governments.

Bank of America, the nation’s largest bank, is paying $36 million to the Securities and Exchange Commission, and $101 million to other government authorities, the SEC said in a statement.

The settlement stems from a wide-ranging federal investigation into the mechanisms through which banks won business from municipal clients. The Charlotte, N.C.-based bank cooperated with authorities in exchange for leniency. In settling, the bank neither admitted nor denied the accusations.

The settlement comes a few months after a former Bank of America banker pleaded guilty to taking part in schemes to underpay municipalities for lucrative investments. Employees at a number of other big banks have previously pleaded guilty.

At the center of the bid-rigging probe is a Beverly Hills-based firm, CDR Financial Products Inc., which was indicted by a grand jury last fall.

CDR is accused of taking kickbacks from banks in order to steer municipal investments to the banks. According to the SEC, the kickbacks allowed the banks to pay governments less than they would have otherwise for governement investments.

“The conduct was egregious -– in return for business, the company repeatedly paid undisclosed gratuitous payments and kickbacks and affirmatively misrepresented that the bidding process was proper,” said Robert Khuzami, head of enforcement at the SEC.

Bank of America Muni Bid Rigging Payments May Be `Tip of the Iceberg'
By Martin Z. Braun and Jeff Bliss - Dec 8, 2010

Bank of America Corp.’s agreement to pay $137 million in restitution for taking part in a nationwide bid-rigging conspiracy for municipal-investment contracts may soon be followed by more settlements to repay the scheme’s victims, the Justice Department’s Antitrust Division head said.

“Stay tuned to this channel -- I think you will see a lot more activity in the coming weeks and months,” Christine Varney, the antitrust chief, told reporters yesterday. “We are committed to getting restitution, full restitution, to all the municipalities that were victims of this scheme.”

Bank of America, which has assisted the government probe of the $2.8 trillion municipal-bond market since at least 2007 in return for leniency, has provided documents, e-mails and recordings of phone calls, according to court records of civil suits. In September, Douglas Lee Campbell, formerly employed by the bank’s municipal derivatives group, pleaded guilty to taking part in a conspiracy to pay state and local governments below- market rates on investments purchased with bond proceeds.

Bank of America’s settlement is “likely the tip of the iceberg,” Andrew Gavil, a law professor at Howard University in Washington, D.C., said in an e-mail. He said other conspirators may pay much higher penalties.

The government has identified more than a dozen firms, including JPMorgan Chase & Co., UBS AG, and Societe Generale as unindicted co-conspirators in a criminal case brought by the Justice Department against a Los Angeles investment broker.

JPMorgan, UBS, a unit of General Electric Co. and a former subsidiary of Belgian bank Dexia SA have also reported in regulatory filings that they face civil suits by the U.S. Securities and Exchange Commission. The companies say they are cooperating with the government.

Varney declined to provide details on the continuing probe. Bank of America is the largest U.S. lender by assets.

The investigation centers on investment agreements that municipalities enter into with money raised through bond sales. The so-called guaranteed investment contracts let them earn a return on the funds until the cash is needed for schools, roads or other public works. The U.S. Treasury Department encourages competitive bidding to ensure that localities get market rates.

Prosecutors have said that favored bankers got inside information from brokers who handled bidding for the contracts so they could carve up the market. In some cases, bankers admitted paying kickbacks to brokers.

“I had conversations prior to the bid with the broker about who the bidders were going to be and who was going to win or lose,” Campbell, the former Bank of America executive, told a federal judge when he pleaded guilty on Sept. 9, according to a court transcript.

Bank of America, based in Charlotte, North Carolina, has been helping the Justice Department in return for leniency in the case. The bank was the first to self-report illegal activity and won’t be prosecuted as long as it continues to cooperate with the government, Varney said.

“The bank’s participation in the leniency program has also resulted in today’s resolution to address the harm caused by its wrongdoing,” Varney said in yesterday’s statement. “As a result of its voluntary disclosure of its anticompetitive conduct and its ongoing cooperation, Bank of America will not be required to pay penalties as a part of the agreements.”

Since the 1990s, the Antitrust Division’s leniency program has been a major boon in helping federal investigators uncover criminal cartels, according to antitrust lawyers. Lacking the program’s protection, banks that are found to be part of the conspiracy likely will pay much higher fines, Gavil said.

In the case against one firm, Los Angeles investment broker CDR Financial Products Inc., prosecutors say it included more than 200 deals involving about 160 state agencies, local governments and nonprofits from California to Pennsylvania.

Three former CDR employees pleaded guilty to charges this year and agreed to cooperate with investigators. Three others have entered not guilty pleas. CDR itself is scheduled to go on trial in September on related conspiracy charges, according to the Justice Department.

CDR faces a fine of as much as $100 million, if convicted, the government has said. In a statement on its website in October 2009, the company said the charges are “without merit and in fact, a total fiction based on a lack of understanding of the municipal reinvestment market.”

Bank of America agreed to pay $67 million in restitution directly to states from California to Connecticut, and another $70 million to the SEC, the Internal Revenue Service and the Office of the Comptroller of the Currency, according to statements from the agencies and states. Varney said the bank’s agreement covers activity from at least 1997 through 2002. The SEC said the bank neither admitted nor denied its findings in agreeing to settle a related securities-fraud complaint.

“Bank of America is pleased to put this matter behind it and has already voluntarily undertaken numerous remediation efforts,” the company said yesterday in a statement.

The bank wasn’t the leader or organizer of the bid-rigging conspiracy, according to the Justice Department. The bank agreed to pay disgorgement and interest ranging from $8,418 for Missouri’s development finance agency to $6.2 million for Massachusetts, according to the SEC.

Over the next few months, 20 state Attorneys General and Bank of America will work together to select an administrator and identify municipalities who may have a claim against the bank, said Jim Finefrock, a spokesman for Jerry Brown, California’s attorney general and governor-elect.

Those who submit claims release Bank of America from other civil restitution, according to documents released by Brown’s office.

Eight one-time bankers and financial advisers, including former employees of UBS, JPMorgan and Bank of America, have pleaded guilty in connection with the municipal bid-rigging probe.
To contact the reporters on this story: Jeff Bliss in Washington at jbliss@bloomberg.net; Martin Z. Braun in New York atmbraun6@bloomberg.net.
_______

Additional evidence of criminality by Bank of America and its senior officers:
LINKS:

[2] 10-05-05 Chairs of US Congress Committees of the Judiciary and Banking Are Requested to Join Senator Feinstein’s Inquiries on Comptroller of the Currency and US Dept of Justice Inspector General: http://www.scribd.com/doc/30979882/

[3] 10-06-11 Complaints Filed with Office of Comptroller of the Currency and SEC against Countrywide, Bank of America (NYSE:BAC), and Brian Moynihan - alleging fraud and extortion on Dr Zernik, fraud on shareholders, on banking regulators, and on the US taxpayer:
http://www.scribd.com/doc/32907453/

Posted by Human Rights Alert (NGO) at 6:39 AM No comments: