[Video] What part of Iron Dome is a hoax?
The system, developed by Israel, sponsored by the US, was again involved in fake news and a dubious major security incident last night, less than 30 days before the general election.
Read more: https://inproperinla.blogspot.com/2019/03/2019-03-15-video-what-part-of-iron-dome.html
VIDEO: Fake new: “Successful intercept” by Iron Dome in the Tel-Aviv sky; posted on March 14, 2019 by New24/7.
https://youtu.be/uEu3E7CiJ64 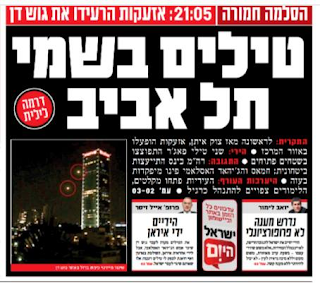 Figure. Fake news: “Missiles in the Tel-Aviv sky”. The photo purports to show the launch of two Iron Dome interceptors; March 15, 2019 headline of the print edition - Israel Hayom daily – Sheldon Adelson’ s propaganda organ for Netanyahu.[i]
---
Tel-Aviv, March 15 – last night around 9:00 pm loud missile attack alarms were sounded in Tel-Aviv, and loud explosions were heard, leading some people to panic. That is agreed by all. The rest of the story is dubious.
Who fired what last night?
Were Iron Dome interceptors launched? Videos were published almost immediately by on-line news channels and broadcast by public television, showing “successful intercepts” by Iron Dome of two Fajr-5 missiles, allegedly fired from Gaza. Nir Dvori, public television Kan 11 military reporter, explained that “one successful intercept is certain”. However, later last night, IDF spokesman Ronen Manelis stated that Iron Dome interceptors had never been launched at all. [ii]
Who fired the missiles? That question remains murky as well. Initially it was claimed that the missiles were fire by Hamas from Gaza, later IDF claimed that the missiles were launched “in error”, or by some splinter group in Gaza.
Today, Shmuel Meir, Haaretz contributor, writes in Twitter, that all photographs and videos of Iron Dome launch over Tel-Aviv last night were “fake news”. 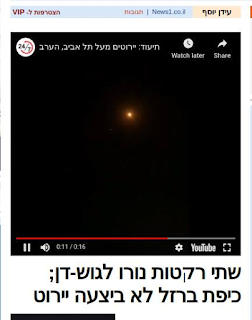 Figure. News1 report: Top – video, purportedly showing the very second of successful “intercept” by Iron Dome over Tel-Aviv last night. Bottom – the headline of the same news item says: “Two rockets fired towards Tel-Aviv area; Iron Dome intercepts were not launched”. [ii]
–-
Some news outlets, for example News1 (above), outdid themselves, publishing in the same item conflicting reports – showing a videos or photographs of the purported Iron Dome “successful intercepts”, while publishing statements by IDF spokesman that no Iron Dome interceptors had been launched.
Massive Israeli retaliation, approved by Netanyahu alone, less than 30 days prior to the general election
Last night Israeli air-force conducted massive air-raids over Gaza.
This morning, analyst Shmuel Meir writes: [iii]
The Security Cabinet of the Israeli Government is the only one that is authorized to decide on military actions. It was neutralized last night in favor of a dubious forum, which included only one man – Netanyahu - in his double hats as Prime Minister and Minister of Defense, who ordered IDF to launch a massive attack on Gaza, which may deteriorate to war…
All of the above events are taking place less than 30 days before the general election, which was scheduled ahead of its normal time by Netanyahu. The change of election date is generally seen as a maneuver by Netanyahu ahead of his pending indictment in several separate corruption cases.
According to polls, over the past few weeks, Netanyahu’s Likud party has lost its leading position. Instead, a newly created party, led by 3 former IDF chiefs of staff, is leading in the polls. Netanyahu’s “softness”, and his inability to manage the situation in Gaza has been one of his weaknesses, which has been repeatedly brought up in the campaign.
Later this month, just prior to the general election, Netanyahu is scheduled to travel to the US for a speech at the annual AIPAC convention and a visit to the White House. Both are seen in Israel as election propaganda events, conducted in English from abroad.
Iron Dome performance record is dubious at best
This is not the fist time that media publish false reports regarding Iron Dome performance. In an incident a year ago involved early media reports of a massive rocket attack from Gaza on neighboring Israeli towns, which was successfully intercepted by Iron Dome. Later, the reports were corrected: There was no rocket attack from Gaza at all, and there were no “successful intercept” by Iron Dome. Instead, there was machine gun fire inside Gaza (not towards Israel), and Iron Dome was launched as a result of “calibration problem”. [iv]
Experts are unlikely to accept the explanation of “calibration problem”. Not only did the incident involve the bizarre false identification of machine gun fire as a missile barrage, it also involved the purported miscalculation that the non-existent missiles were going to hit Israeli populated areas. Due to its exorbitant cost, Iron Dome is supposed to calculate the projectile’s target site, and launch interceptors only if the missile is projected to hit a populated area. To top it off – fake news of “successful intercept” originated somewhere.
Further back, during the 2014 Israel-Gaza conflict, the evidence showed that the Israeli government used false alarms and fake news of missile attacks on the Tel-Aviv, coupled with fake Iron Dome “successful intercepts”, for propaganda purposes. [v] The purported missile attacks on Tel-Aviv were used to justify the massive bombing of civilians in Gaza – resulting in killing over 2,000 Gazans, including around 500 children. Some parts of that conflict are now the subject of ICC Hague investigations. [vi]
Iron Dome is an anti-missile system developed by Israel with over USD 200 millions in direct US funding. Its performance record has been argued over the years, with IDF claiming success rates in the 80-90%, whereas others claim success rates of 5% or lower. [v]
LINKS
i 2019-03-15 Israel Hayom, print edition, on-line display
http://digital-edition.israelhayom.co.il/Olive/ODN/Israel/
ii 2019-03-14 Two rockets fired towards Tel-Aviv area; Iron Dome intercepts were not launched | News1
http://www.news1.co.il/Archive/001-D-411939-00.html
iii 2019-03-15 Shmuel Meir on Twitter
https://twitter.com/ShemuelMeir/status/1106478159069876226
iv 2018-03-25 IDF: Iron Dome fires mistakenly in response to Hamas drill | Times of Israel
https://www.timesofisrael.com/iron-dome-intercepts-missile-from-gaza-as-sirens-wail-across-southern-israel/
v 2014-07-13 What part of the missile attacks on Tel Aviv is an Israeli hoax? | OpEdNews.com
https://www.opednews.com/articles/What-part-of-the-missile-a-by-Joseph-Zernik-Corporations-Military-Industrial-Complex_Israeli-Attacks-In-Gaza_War-Crimes-140713-234.html
vi 2018-09-01 ICC to open full-blown investigation in settlements, 2014 Gaza war | PNN
http://english.pnn.ps/2018/01/09/icc-to-open-full-blown-investigation-in-settlements-2014-gaza-war/

Posted by Human Rights Alert (NGO) at 1:54 PM No comments: