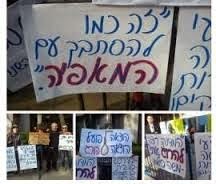 Moti Ashkenazi, commander of the Budapest bunker, the only bunker of the Bar-Lev line on the Suez canal, which managed to stand up to the Egyptian assault in the 1973 war.

Posted by Human Rights Alert (NGO) at 3:26 PM No comments:

Rafi Rotem is the poster-child of extreme corruption of government in general, and the justice system in particular in Israel (within the 1967 borders) today! He is likely to become a political prisoner. As is the case in the United States, the persecution of whistle-blowers is one of the cardinal signs of collapse of civil society.