Request to inspect decisions of the Nazareth District Court in the Zadorov case - murder of 14 yo Tair Rada - was filed with Presiding Judge Avraham Avraham
In the criminal prosecution of Roman Zadorov, judges of the Nazareth District Court engaged in maintaining double-books for dockets in IT and case management system of the court - Net-HaMishpat.  The September 14, 2010 "Verdict" fails to appear in the publicly accessible docket, and the "Sentencing" record of the same day, which appears in Net-HaMishpat docket, is not an authentic record.  There is no doubt that a court, which maintains double-books and fails to register its own judgments, would be deemed an incompetent court.  Such conduct is out of compliance with the law of the State of Israel, with Human Rights, and fundamental integrity.  The Roman Zadorov case again demonstrates the serious fraud in development and operation of Net-HaMishpat - IT and case management system of the Israeli district and magistrate courts.  Many believe that the true suspects in the murder of Tair Rada are those who were students in her high school.  Moreover, concerns have been repeatedly raised that family relations between the students and Israel Police personnel were the reason for undermining true investigation of the murder, and the framing, false prosecution and false conviction of Roman Zadorov.  The investigation of the Tair Rada murder and the prosecution of Roman Zadorov are the scarlet letter of the Israeli justice and law enforcement system today!
. 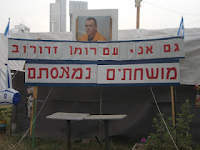 The late Tair Rada, Roman Zadorov support sign in the OccupyTLV camp, Nazareth District Court Pro Tem Presiding Judge Avraham Avraham.
___
OccupyTLV, November 12 - request was filed with Pro Tem Presiding Judge of the Nazareth District Court Avraham Avraham to publish procedures for inspection of decisions and judgments in the court files in general, and in particular - in the criminal prosecution against Roman Zadorov in the case of the murder of 14 yo girl Tair Rada. [1]

Judges of the Nazareth District Court engaged in maintaining double-books in Net-HaMishpat - IT and case management system of the Court in this case.  The September 14, 2010 "Verdict" record fails to appear at all in the public docket, and the "Sentencing" record of the same date, which appears in the public docket, is not an authentic court record.

There is no doubt, that a court, which maintains double-books for its dockets, and which fails to duly register its own judgments will be deemed an incompetent court.  Such conduct is also inconsistent with the law of the State of Israel, with Human Rights, and with fundamental integrity.
Therefore, the Zadorov case again documents the basic fraud in development and operation of Net-HaMishpat - IT and case management system of the district and magistrate courts in Israel.
Furthermore, the September 14, 2010, were purportedly the records, in which the appeal, now pending before the Supreme Court originated.  However, inspection of the Supreme Court file showed that no authentic judgment records were filed with the appeal, in disregard of provisions of the law...
Additionally, inspection of the paper court file of the Supreme Court (original records, since the Supreme Court is not electronically administered) in the appeal, showed that the absolute majority of the Supreme Court's justices' decisions, which were published in the Supreme Court's public access system, were unsigned.

The perversion of court records and court process in the Supreme Court in this case, come on the background of what is perceived by many, both experts and the public at large, as framing of an innocent person for murder, his false prosecution and false conviction.  Public reactions in this affair are unprecedented in the history of the Israeli justice system:
It should be noted that the victim's mother, who was provided access to the investigation material, said in interviews with media, that she did not believe that Roman Zadorov was the murderer, and that the true murderers were "from Tair's world", and "kids murdered my daughter out of jealousy".
The victim's parents also filed petitions with the Supreme Court, asking to compel the Israel Police to reopen the investigation, claiming the conduct of the investigation was "extremely unreasonable".

According to reports from the Nazareth District Court:
Many, including those who are familiar with the details of the investigation, believe that the true suspects in the muder are youths, including students in the victim's high school.  Moreover, many believe that family relations of the students with Israel Police personnel were the reason that the investigation was undermined, and that Roman Zadorov was framed instead.  At the same time, there is concerted effort to cover-up the relationships between the students and Israel Police.

Judge Yitzhak Cohen of the Nazareth District Court, who chair the 3-judge panel, which twice convicted Zadorov of the murder, was forced to resign last year, after Israel Police recommended that he be prosecuted on sex crimes.  However, it appears that the State Prosecution has no intention of going through with the prosecution of Judge Cohen.

The State Prosecution also applied pressure on another senior forensic medical expert, Dr Hen Kugel, to alter the affidavit he filed in court...

The investigation of the murder of Tair Rada, and the framing of Roman Zadorov, his prosecution and conviction, are the scarlet letter of the Israeli justice and law enforcement system today.