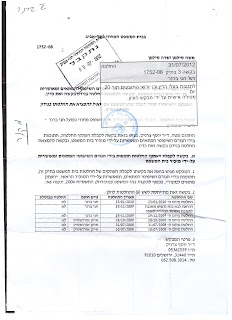 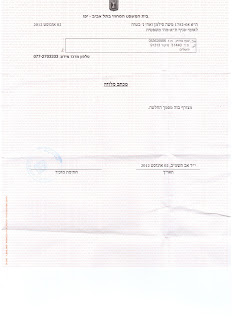 Jerusalem, Aug 20 - following the filing of requests to inspect and to copy the court records in cases related to the late Moshe Silman, and after repeated requests that the Tel Aviv District Court comply with notice and service rights, as an essential of Due Process/Fair Hearing, a first mailing was received from the District Court. The mailing was a purported notice and service of a July 31, 2012 decision by Judge Hagai Brenner.

The simulated decision itself is an unsigned electronic "Post-It Decision", an image, which was superimposed on the image of the face page of the respective Request to Inspect and to Copy.  The decision itself also fails to appear among decisions listed in the online public access system of the District Court.

None of the records of the purported service could conceivably be deemed valid legal records, let alone valid and effectual court records.
The simulated service [המצאה למראית עין] of a simulated decision [החלטה למראית עין] are consistent with the conduct of simulated proceedings [הליכים למראית עין] and simulated litigation of the case as a whole.

The case of Moshe Silman provides unique documentation of the fraud inherent in the design and operation of Net Ha-Mishpat - the electronic record system of the district courts.

Joseph Zernik, PhD, of Human Rights Alert (NGO), who was present on location during the videotaping, immediately challenged Commander Avrieli's statements as false and deliberately misleading.
Eye witnesses of the event stated that they had called police emergency lines and sought help for "murder" being committed. However, police, whose headquarter is less than half a mile away, took about 15-30 minutes to arrive.  One of the witnesses confirmed this fact also to the interview team.
According to eye witnesses, when police arrived, the victim was still standing, but police did not stop the violence until the victim was lying on the ground motionless.
Needless to say, video recordings of the surveillance cameras, combined with emergency lines recordings, both held by police, could provide the unequivocal answer to this question. It is doubted that in any investigation of the case by State of Israel authorities the videos and recordings would be released.
Commander Avrieli also failed to answer additional troubling questions regarding the event, and security policies of the Israel Police in Zion Square:
* Why has police refused over the past year and a half to deploy uniformed police in Zion Square, at least during the weekend nights, even after a similar lynching event in February 2011 almost in the exact same location, and after repeated requests for Equal Protection by uniformed police presence in the Square?
* Why did none of the multiple undercover police deployed in the area stop the violence? From other incidents in the Square area it is clear that there are almost numerous undercover police around the Square.
According to Dr Zernik, the reliance on undercover police only and the refusal to deploy uniformed police, together with the heavy reliance on surveillance, are employed for differential law enforcement, or discrimination in providing Equal Protection under the law.
In the aftermath of today's videotaping, Dr Zernik provided the Aruz2 journalist with copies of his correspondence with Knesset (parliament) and with the Israel Police on the issue of lack of security in Zion Square, refusal to deploy uniformed police, and the dubious role of uncover police in the Square. [1,2]

Separately, the US government has denounced terror activity by Jews against Arabs over the past weekend.
The commander of the Israel Police Jerusalem Disrtrict, whose carreer was founded on undercover service, was forced to leave office 3 weeks ago, following allegations of sexual misconduct in relations to subordinate female police officers.