2017-06- 29 "Incompetence and/or corruption of the courts and the legal profession, and discrimination by law enforcement in Israel" - Human Rights Alert (NGO) submission to the UN June 29, 2017 - Human Rights Alert (-NGO) filed Submission (~3,000 words) and Annex (over 350 pages) for the Universal Periodic Review of Human Rights in Israel, titled: "Incompetence and/or corruption of the courts and the legal profession, and discrimination by law enforcement in Israel".   The review is conducted by the UN Human Rights Council for every member nation every 4 years.  The review of Israel and other nations in the current session starts now, a process involving the Israeli Foreign Ministry and other nations, and will conclude in a meeting in Geneva in January 2018.

The Human Rights Alert (NGO) Submission focuses on deceit and breach of trust by judges and attorneys, related to judicial and legal records, particularly electronic court records, generated in new invalid IT systems of the courts, which enable such conduct.  The Submission and Annex raise concerns regarding collusion and/or acquiescence of informatics experts, for which Israel is world-renown. 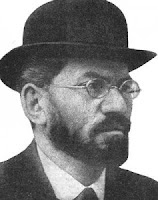 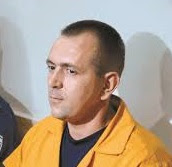 Figures. The Jew Mendel Beilis was falsely prosecuted and falsely convicted of the murder of a boy in the Ukraine a century ago.  The Christian, Ukrainian Roman Zadorov was prosecuted and purportedly convicted in the 2006 murder of a girl in Israel.
Law professor Boaz Sangero wrote: "Conviction with no real evidence."
Law professor Mordechai Kremnitzer wrote: "Conduct of the State Prosecution in the Zadorov case is scary, it is not conduct of Prosecution, which is seeking the truth…  Adding to that the Supreme Court’ stance and the Attorney General’s conduct in recent years, one is left with a justice system, which is primarily defending itself."
_____

The Submission and its Annex provide a long list of cases as evidence of serious violations of Human Rights by the justice system itself.  The case of Ukrainian citizen, Roman Zadorov, who is confined in Israel, purportedly after being convicted of murder, but with neither valid, enforceable Verdict nor Sentencing records, and with no Arrest Decree (prescribed by Israeli law for admitting a convict to prison) at all, is probably the most notorious of the cases in the Submission and Annex.

The submission concludes that the evidence indicates systemic violations of Human Rights, treaties and conventions as well as State law by Israeli justice agencies, holding serious implications relative to all aspects of Civil Society in Israel:


The submission recommends that major efforts should focus on restoring integrity of the courts and the legal profession:


Three previous HRA submissions, have been incorporated into UN HRC UPR reports, with the following notes:


These three HRA submissions may be the first ever Human Rights reports, which focus on analysis of e-government and its effects on Human Rights. 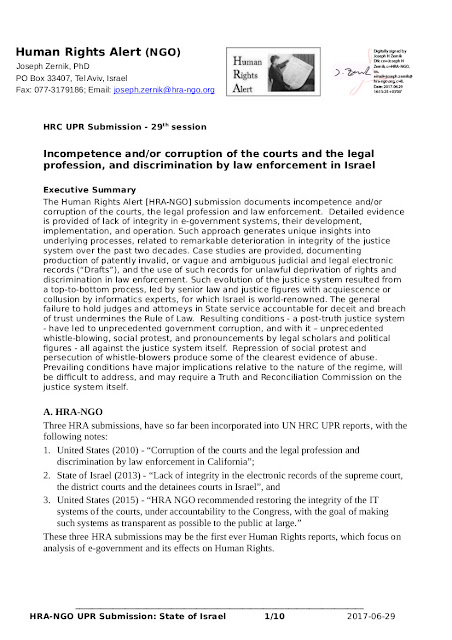 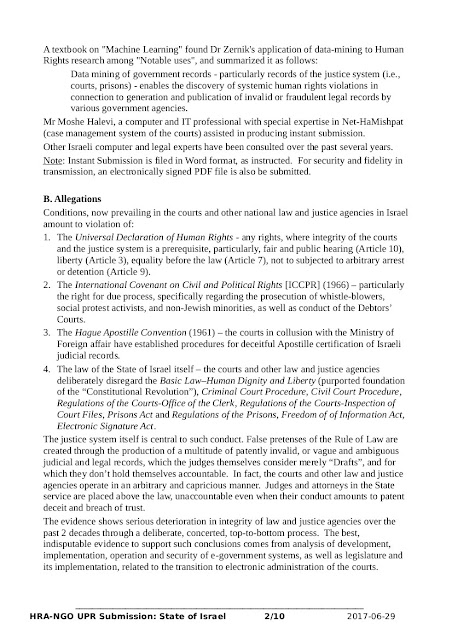 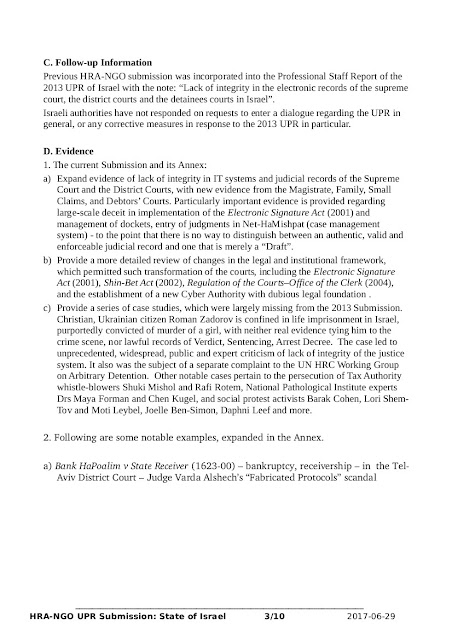 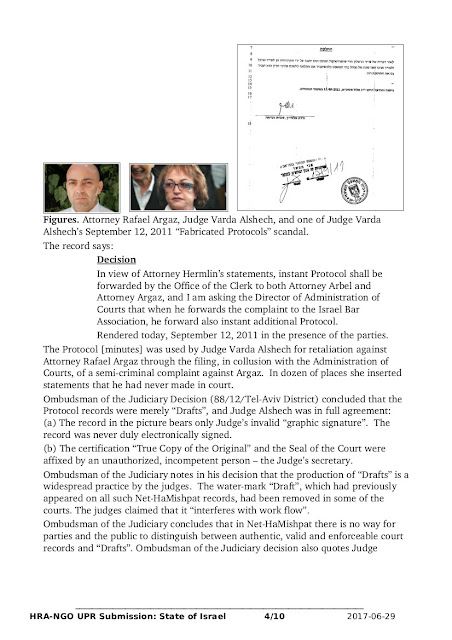 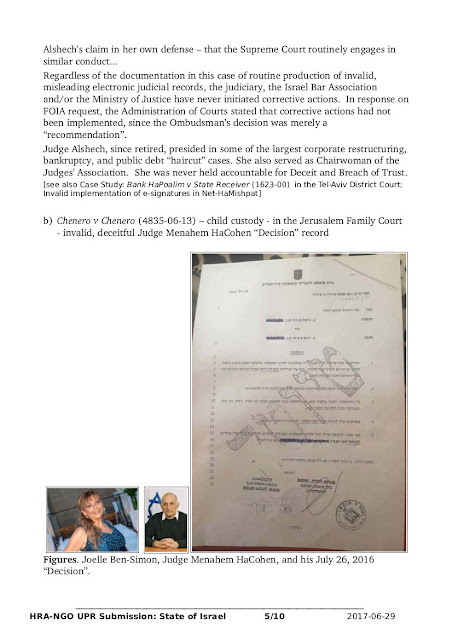 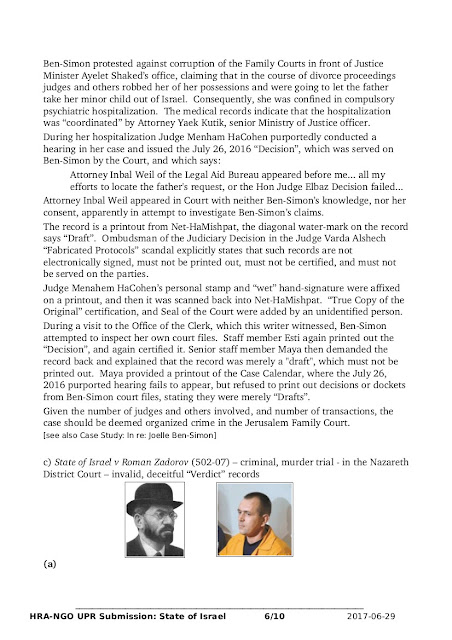 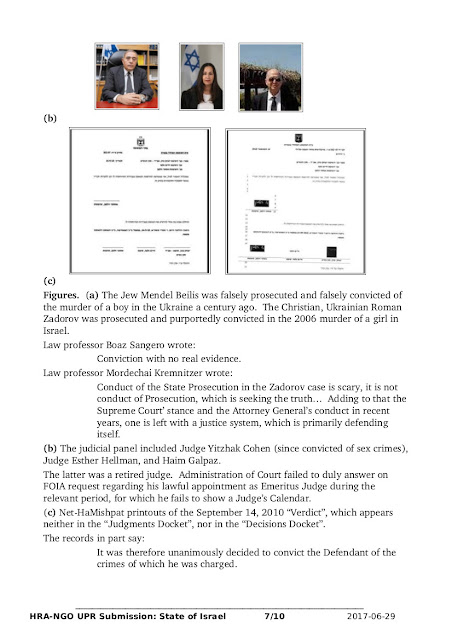 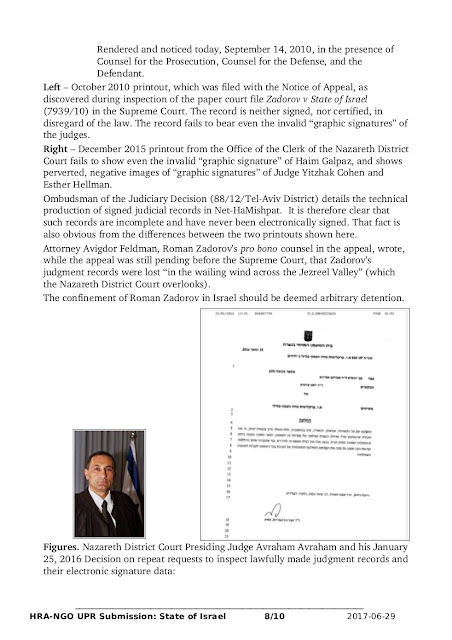 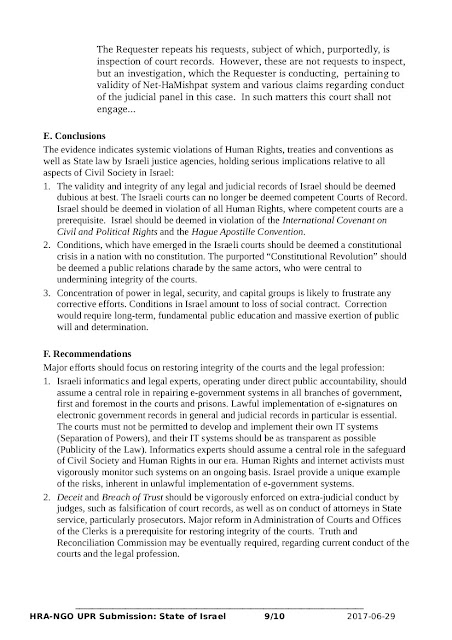 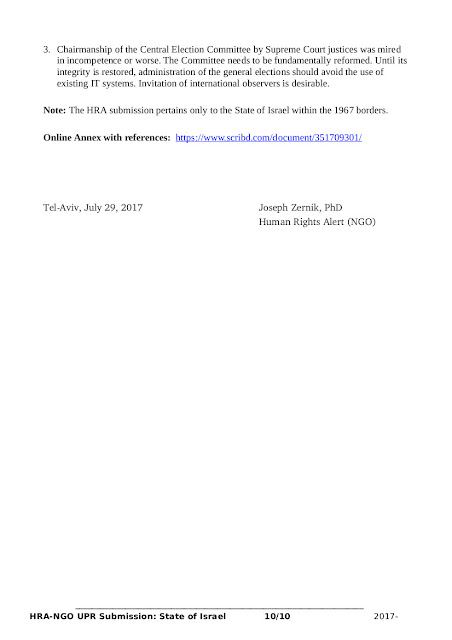